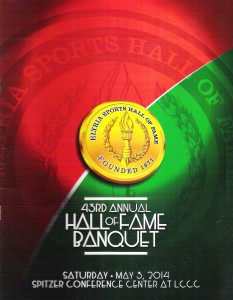 At a young age it was apparent that Mike Kozma was a champion in both track and field. Kozma won many AAU Junior Olympic events including the shot put, high jump and the long jump but it was i

n the 100- and 220-yard dash that Kozma really made some noise. At Elyria Catholic, Kozma’s name was always listed among the area’s track honor roll — running the 100-yard dash in a state-fastest 9.62 and the 220 in a school record 21.6. A 1979 EC grad, Kozma finished seventh at the state meet as a sophomore in both the 100- and 220-yard dash. As a junior, Kozma was third in the 100 and second in the 220. He finished third at the AAU National Championships. After establishing the fastest 100 time in the state, an injury prevented Kozma from competing at the state meet. Kozma earned a scholarship to Indiana earning four varsity letters and was a member of the Big Ten champion 4 X 100 relay team. 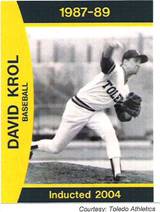 Elyria Catholic has had many great pitchers in its baseball history but one of the best was righthander Dave Krol, who led the Panthers to a berth at the state tournament in 1986. At one point in the season, Krol had won eight games without defeat with a 1.02 ERA. He struck out 84 hitters and walked only 14. As a hitter, Krol batted .481 with 20 RBI and two homers. Krol was EC’s quarterback for the 1985 season but his pitching earned him a scholarship to Toledo where he’s already been enshrined in the Toledo Hall of Fame. He was All-MAC in 1988 and 1989 and was the first Toledo baseball player to be named Academic All-American. In 1987, Krol was 6-3 with a 3.13 ERA. In ’88, he was 6-7 with a 2.19 ERA in 119 innings pitched and led the MAC in strikeouts with 90. As a senior in 1989, Krol was 7-3 and again led the team in strikeouts and innings pitched. He ranked among the top 10 in seven pitching categories at UT. He graduated magna cum laude and played in the Minnesota Twins organization for three years. He later earned a medical degree from Yale and is practicing pediatrics at University Pediatrics in Toledo.

The only Lorain County team to ever bring home a state baseball title was the Elyria West Wolverine’s in 1992. Usually there’s one standout hitter and one standout pitcher on a champion but Staton was both for West. He won four of six decisions for the Wolverines and batted .392 with six home runs and 29 RBI. Staton had a 10 year minor league career in the Pirates and Expos organizations. Today, he runs Staton Sports in Lorain, Ohio helping the area’s youth become better baseball players. 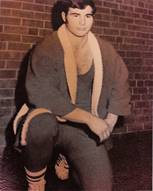 To be a champion in the sport of wrestling takes a lot of desire, fortitude, strength and agility. Tim Sweigard proved to have all those qualities in winning the 175 pound state title in 1972. Sweigard was also a prominent member of Elyria High’s undefeated 1971 football team.
.

It’s one thing to be named Miss Volleyball or Miss Basketball but for one individual to win both is simply amazing. Jessy Verhoff claimed both those glamorous titles her senior year at Elyria High in 1999 for volleyball and 2000 in basketball. Jessy went on to play at Indiana State on the basketball team with her sister Lisa. She was special mention All-Ohio in Basketball and first team All-Ohio in Volleyball. She won four letters in both sports.

Yes, the team lost a game — 6-0 to Barberton to open the season, but after that upset loss, it went on to win the next nine games including a decisive 32-6 win at Strobel Field over the vaunted Sandusky Blue Streaks in front of a standing room only crowd.

Sandusky had won 28 straight football games to that point. Elyria’s long-time and winningest coach — Bill Barton — called it his best win ever.

At Ely Stadium against rival Lorain for the final game of the season, the Pioneers overcame a 14-0 first quarter deficit to beat the Steelmen, 23-14, and wrap up the 9-1 season and 7-0 Buckeye Conference title. Elyria averaged 29 points a game while giving up less than four.

It was Elyria’s first out-right Buckeye Conference championship and the highest state ranking attained since the legendary 1947 team finished runner-up to Barberton. The Pioneers finished third in the final poll of the year behind unbeaten Massillon and once-beaten Canton McKinley. Sandusky wound up 7th, Barberton 14th, Lorain 19th with Admiral King and Findlay each getting votes.

Because the state playoffs wouldn’t start until 1972, neither the ’64 or the ’47 teams had the opportunity to play for the state championship on the field.

The groundwork for the state championship teams at Elyria Catholic was set up to a great extent by the work of the CYO coaches at the elementary and junior high levels. One of the best was Jim Tomsic. Tomsic also helped make the Labor Day picnic at St. Judes the success it is today.