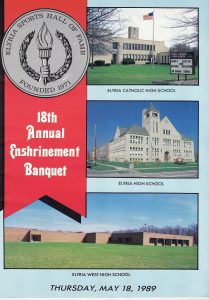 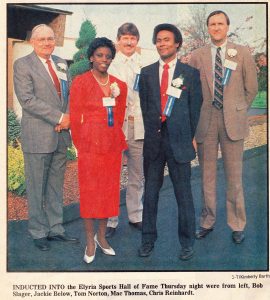 Known in her Elyria High days as Jackie Williams, Below was a standout in the early years of volleyball, basketball and especially track at Elyria where she captained all three teams. After graduation in 1976, she went on to national track fame in college  – 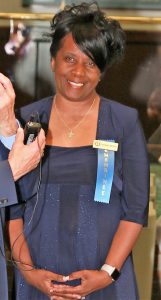 – gaining the highest national honors of any female athlete in Elyria history. Below held EHS records in the 100 and 220 dashes and was a member of school record 440, 880, spring medley and mile relay teams. She qualified to the state track meet in a total of six events her junior and senior years. She placed in three as a senior (5th in the 100, 6th in the 880 and 2nd in the mile relay). Her prowess continued at Lorain County Community College. She captained the basketball team – earning two letters. In track, she qualified for the NJCAA National championship track meet in four events in 1978 and two in ’79 and was All-American both years. Then it was on to Prairie View A&M in Texas – the No. 1 team in the nation in 1980 when Below attended. She was nationally ranked in both the 100 and 200 meters and qualified for the Olympic Trials in both events. At the 1980 Astrodome Invitational against some of the best runners in the world including those from East Germany and Russia, she placed 2nd in the 100. Below has been a standout in recreational softball, participating on numerous city championship teams. In 1975, her Red Barn team finished 5th in the state and in ’79, her Smink Electric squad qualified for the national championship. Below has since turned her talents to coaching – both at the junior high and high school levels. Her 2003 Girls Track team won the Division I state championship for Elyria High. 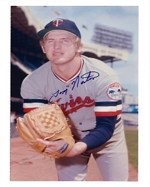 n was known as a big, strong, right-handed pitcher during his scholastic career at Elyria High and that strong right arm carried him to a brief career in the major leagues with the Minnesota Twins. Norton’s career with the Twins was brief (he pitched in 1972) but making it to the big leagues is quite an accomplishment. Norton was only the second Elyria High graduate to play in the big leagues – the first being the legendary Vic Janowicz. Norton’s numbers for the Twins were respectable – a 2.81 Earned Run Average in 32 1/3 innings. The highlight of Norton’s professional career came in 1975 in the minor leagues where he threw a no-hitter for Tacoma in the AAA Pacific Coast League at Honolulu. He struck out 11 batters. Prior to his pro career, Norton was a standout for the Pioneers and Elyria’s Post 12 American Legion team. Norton teamed with fellow Elyria Sports Hall-of-Famer Dennis Queen to give Elyria a potent righty-lefty combination. As is the case with many pitchers, Norton’s career was cut short due to arm problems. He did pitch briefly in Mexico and with a Chicago White Sox farm team.

When you add it all up, Chris Reinhardt will be remembered as one of the top ba

players ever to suit up for Elyria High. Reinhardt’s high school career was highlighted by several honors. He earned second team All-Ohio, first team All-Buckeye Conference, first team All-District honors during his outstanding career. Reinhardt scored over 20 points 15 times for the Pioneers – his career high of 28 points against Sandusky. He grabbed a career-high 25 rebounds against Mansfield. Reinhardt was a three-year starter for the Pioneers and his point average steadily rose throughout his career. As a sophomore, he scored 5.8 points per game and increased his production to 15.9 as a junior when his last second shot defeated rival Admiral King in the sectional title game. He scored 18.9 points per game as a senior in 1970, leading Elyria to the regional finals. He scored 473 points and was named the MVP of the sectional tournament that year. Upon graduation, Reinhardt had 883 career points for Elyria – second all time at that point. Reinhardt became the only Elyria High athlete to earn a basketball scholarship to Ohio State – where he lettered.

hest plane. Whether paid to do the job or not, Slager gave his time willingly as a

coach, official and organizer of youth sports. He was responsible for keeping the Lorain County Decathlon alive and started the girls Pentathon. The Decathlon was successful for more than 25 years. Slager served as commissioner for the city’s former Hot Stove baseball program and also coached. As an active football and basketball official, Slager served as president of the Elyria Umpires Association. Slager’s forte was track. He was associated with Elyria’s program for 24 years – starting in 1958. He was head coach for the final 15, stepping down after the 1981 season. Among his trace accomplishments in coaching were the 1967 Buckeye Conference championship, championships in relays at Sandusky, Berea, and Amherst. His teams won several district titles and every Elyria High record was tied or broken during his tenure. Slager started in the Elyria School System in 1954 starting at Edison Elementary. He moved on to Franklin Junior High for three years before moving on to Elyria High. He was an assistant basketball coach under the legendary Dale Reichenbach from 1963-66. Since his retirement, Slager has remained active in local track evernts and has served the Elyria Sports Hall of Fame as its treasurer for many, many years.

Mac Thomas could do it all for Elyria High’s football team. As a wingback, he was nothing short of sensatitonal – helping the Pioneers to consecutive undefeated teams in 1968 and 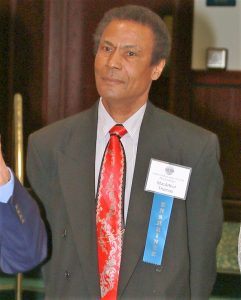 69. As a defensive back, he was a member of a unit that allo

wed just 24 points and just one touchdown all year in ‘69. Thomas was named All-Ohio by the United Press International, first team All-Buckeye Conference and was selected by the Chronicle Telegram as one of Elyria’s players-of-the-year. In 1969, Thomas scored eight touchdowns and four two-point conversions. In fact, he scored in nine of the 10 Elyria games and tied for eighth in the area in scoring. He rushed for 511 yards, averaging 7.9 yards per attempt. He caught six passes for 61 yards. He was also impressive in track – setting records in the 100-yard dash, the 220-yard dash, the 180-yard low hurdles and the 880-yard relay. Thomas went on to a fine career at the University of Akron. He played split end and earned three letters. He averaged 19 yards per catch and in 1973 received the Fred Sefton Award as the Zips’ top offensive player. He played in the All-Ohio Shrine Bowl All-Star game in 1973. Thomas returned to the Elyria Schools – first serving as a teacher at Eastern Heights Junior High before becoming an assistant principal at Elyria High.