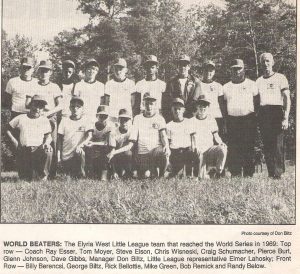 In 1969, Little League West’s 11- and 12-year old all-star team set sail on a great adventure and wound up being tied as the 3rd best team in the world. The West All-Stars won nine games and tied one in 11 starts in tournament competition. In order, West defeated Avon, 6-1, New London, 5-1, and Collinwood, 4-1, to win the District. In the state tournament, West defeated Poland, 6-0, Marion, 1-0 (in 12 innings) and Wintersville, 4-0, for the championship. Chris Wisneski threw a no-hitter to win the State Title game over Wintersville. If that weren’t enough, he homered, doubled and singled in three at-bats. He struck out 11 and walked two. At the Central States regional in Ottumwa, Iowa, West beat Chicago Evergreen Park, 5-1, and in the finals, beat Sedalia, Mo., 2-0, to advance to Williamsport. At that time, West was just the third Ohio team to play in the Little League World Series. Elyria opened with a 5-2 win over Mayaguez, Puerto Rico, before facing Taiwan in the semi-finals, where they lost a hearbreaking, 4-3, contest.  In the consolation, Elyria and Tampa were tied 1-1 after nine innings before the game was game was halted due to the championship game scheduled to be on national television. The team was managed by Don Biltz and coached by Ray Esser. Members of the team included Wisneski, Craig Schumacher, Dave Gibbs, Pierce Burt, Glenn Johnson, Steve Eisom, George Biltz, Ken Bellottie, Ric Bellottie, Tom Moyer, Bill Berenzi, Bill Green, Randy Below, and Rob Remick.