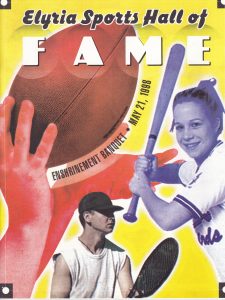 Football, basketball or track – you name it – Mark Cannon excelled in it. The 6-foot-4 Canno 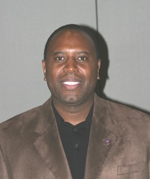 n won the state Division I high jump championship three straight years from 1985 to 1987 – the only Elyrian to achieve such a feat. In 1987, his 7-foot-2¼ leap established a state meet record that remains today. In June of 1987 he won the Midwest Meet of Champions. Cannon had an outstanding track career at Ohio State where he became the Buckeyes’ best high jumper. As a sophomore he was third or better in 12 of the team’s 14 meets and finished second in the Big Ten outdoor season. He was also second in the indoor season. His junior year, he was runner-up indoors in the conference meet and outdoors led OSU at the Texas Relays with a 7-foot-1 jump. During the 1990 indoor season, he set a school record with a 7-3 jump. At Elyria High, Cannon earned three letters in basketball and one – as a sophomore – in football. His basketball career had many highlights. He averaged 10.3 points a game as a sophomore, 15.4 and 10 rebounds as a junior, and 15 points and 8.8 rebounds as a senior. He shot 57.6 percent from the floor his senior year and was named Player of the Year in the Buckeye Conference. Cannon was All-County and Special Mention All-Ohio. He was named to the All Buckeye Conference second team as a junior.

Basketball is supposed to be a big man’s game, but nobody stood taller than 5-foot-9 Mike Fischer for Elyria High’s incredible State Tournament run in 1964. Fischer was the man of th

e hour during a couple of Elyria’s biggest tournament victories in its storied history during his junior season. It was his play that helped Elyria through the sectional, district and regional tournaments to reach the state semi-finals after posting a mediocre 11-7 regular season record. Fischer scored 19 points in a huge 43-42 upset over then unbeaten Cleveland Rhodes, the Cleveland City champion. Twice his shots tied the game enabling teammate Chester Ross’ free throw with two seconds left to win it. The next week – against Toledo DeVillbis – a team that had destroyed Elyria on Elyria’s own floor early in the year – the Pioneers and Fischer took the Tigers to a four overtime classic that Fischer won with a rebound basket in the lane as time expired. Earlier, Fischer’s 3-point play with six seconds left in regulation tied it. He followed that up with an 18-point effort against Lexington to land Elyria in the final four before Cleveland East ended the Cinderella story in the semi-finals. As a senior, Fischer led the Pioneers in scoring with a 17.2 average. At the time, his 362 points were the 10th best in school history and his 32 consecutive free throws is still an EHS record. He was first team All-Buckeye and All-Lorain County. Fischer continued his basketball at Heidelberg College where he scored 1,006 points – 18th on the all-time list at the time.  He was the team’s MVP as a senior – averaging 13.4, 17.5, and 15.7 points per game in his three years on the varsity. He was inducted into Heidelberg’s Hall-of-Fame in 1996.

ave done. A cracked rib in the sixth game of Elyria Catholic’s 1971 season stopped his assault on the school rushing record. He would have led the area in rushing and scoring if not for the injury. But what everybody did know

was that Doug Gerber was a special football player. He’d already proven that. His coach, Wayne Diederich, thought his running instincts were among the top three players he ever coached. Even missing four games, Gerber rushed for 936 yards in 103 attempts – averaging over nine yards a trip, and scored 96 points, third in the area. He opened the year with a 267 yard performance against Clearview, then a school record. As a defensive back, he led the Panthers with four interceptions. EC was 7-1-2. The 170-pound running back was All-North Central two years. He lettered three times for the Panthers. Gerber was a standout in basketball as well, starting two years on a team that won 36 of its 44 games. As a junior, he helped the Panthers to a 19-2 season and a NCC title. A year later, he led the Panthers to their first District championship. Gerber led the team in scoring with a 16.5 average, led in assists with 108 and was second in rebounding with 150. He was All-North Central and named Honorable Mention All-State by the Associated Press. Gerber won the Elyria Jaycees Sportsmanship and Lou Rotunda Award as a senior.

If any player defined championship basketball at Elyria Catholic, it was Gary Grambley’s 1977

and 1978 seasons. In one way, it’s a curious definition because the Panthers were a TEAM in capital letters – strong, well-balanced, and eager to boost each other. Yet it was Grambley who was the marquee p

layer – the all-state guard who led the Panthers in scoring, including a memorable 30-point performance in the District Championshp victory over Elyria West. The Panthers were 22-2, ranked number one in the state by the UPI and reached the regional finals. Grambley, a 6-foot-2 shooting guard, averaged 17.2 points a game, was second in assists with 112, shot over 50 percent from the floor, nearly 80 percent from the free throw line and made the AP’s All-Ohio first team – the second Panther to be so honored following Russ Sherman. He was named to the UPI’s second team. Grambley was AP’s District player of the year, first team all-conference in both the North Central and Erie Coast and first team All-County. He played in the North-South All-Star game, scoring 19 points to lead his team to victory. As a junior, Grambley averaged 11.3 points and led the team in assists with 96. He was named to the All-North Central Conference team and Elyria Catholic won the league title – finishing with an 18-3 mark overall. Grambley played two years of basketball at Kilgore Junior College in Texas, averaging 13 points and five assists his freshman year and 16 points and six assists for an 18-7 team a year later. He then played two years at Sam Houston State, a Division I school. The team won the Lone Star Conference in 1982 with Grambley averaging 10 points and four assists.

Robert Palmer was the model of a Hall of Famer in terms of sports service. Palmer, who d

ied in 1994, gave his time and his money for Little League Baseball. He was a huge part of Little League South for 30 years, more than 20 as its president, and he kept working at South long after his own children had gone through the league. More than once, it was his money that kept the league alive and going – it was his diligence and dedication to Southside youngsters. Money, sponsors and adult manpower have long been short in supply at Little League South and the league has endured ongoing acts of vandalism that has taxed its meager resources. That the league survives today is testament to Palmer’s work. The league’s fields are named in his honor. Palmer was born in Keysville, Georgia and grew up in Pittsburgh but Elyria was his home for 47 years. Not only was he active in Little League, he was president of the Elyria Neighborhood Center from 1975 until his death. He served on the Capital Fund Drive that raised a half million dollars for repairs, renovation, equipment and expansion of the Haven Center for the Homeless. He was also active in the Urban League’s Lorain County Mentoring Program. One of his sons – John Bohannon – is also a member of the Elyria Sports Hall of Fame. Palmer passed away in 1994. 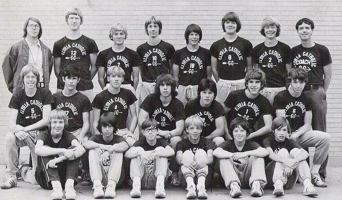 ad to share the state spotlight with the cross country program. The seeds for success were planted and nurtured by the 1973 and 1974 state champions – the first state titles for the school. Actually, the success began in 1972 when Tim Kuhman and Tom Schmidt helped EC to a state runner-up finish behind Chardon. A year later EC won the whole thing, placing five runners among the state’s top 20: Kuhman was fourth, Schmidt sixth, Bill Stetson seventh, Bob Schmidt 19th and Jeff Brizes 20th. Lee Korzan and Dave Schlather also contributed to the team’s success. In a sport where the low score wins, EC’s 56 points were less than half of its nearest rival – Colonel Crawford. A year later, Brad House and Eric Essenmacher were on the team as the Panthers defended the championship, beating Tipp City by a whopping 60-110 margin. Stetson was fourth, Brizes ninth, House 10th, and Bob Schmidt 16th. The Panthers almost had five top 20 finishers again – this time missing by one place. The EC success continued. The school won two more state titles in 1977 and 78, was second in 1979 and third in 1975. Dick Elsasser, an ESHOF enshrinee and Tom Mahl coached the Panthers.

In continuing an eight-year tradition, the ESHOF awarded Ernie Ensign with the Distinguished Service Award. The award was initiated in 1991 to give recognition to deserving Elyrians.

Ensign became the first to be recognized for his fame in the sport of Auto Racing — as an owner of a race car. Ensign was the owner and head mechanic for a team that won the 1975 National

Sprint Car title. The car was driven by Larry Dickson. In 1974, his car driven by Dickson, won the Little 500. Bob Frey, Ensign’s Son-In-Law, also drove for Ensign, and won the 1973 Florida State International.