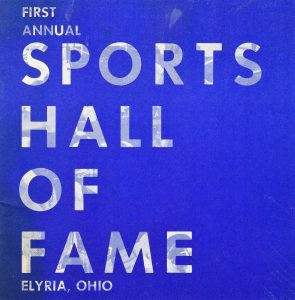 Considered by many to be the greatest athlete in Elyria’s history,Jack Ambrose was prolific in 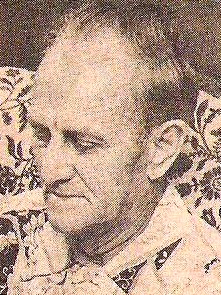 basketball, football, baseball, track, tennis, hockey, and golf. He participated in all those sports at various levels. He quarterbacked a professional football team, pitched in an afternoon baseball league, and was a guard on a local cage squad. His Fort Wayne Friars uniform has been enshrined in the Pro Football Hall of Fame in Canton.  He was instrumental in starting the American Legion baseball program here locally as well as organizing church basketball leagues and benefit football games in his era. He also coached briefly at Elyria High shortly after World War I. 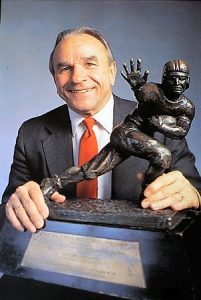 Undoubtedly the best-known athlete the city of Elyria has ever produced, Vic Janowicz won the 1950 Heisman Trophy – signifying the country’s best collegiate player while performing for the Ohio State Buckeyes. Janowicz played on Ohio State’s Rose Bowl champions in 1950 and was the MVP in the East-West Shrine Bowl game at San Francisco, the Hula Bowl game in Hawaii, and the College All-Star game in Chicago. Janowicz went on to play both professional baseball with the Pittsburgh Pirates and professional football with the Washington Redskins.  Janowicz was a 3-sport star at Elyria High – leading the Pioneers to a 9-0 finish in 1947 and earning a spot on both the 1946 and 47 All-Ohio football teams. EHS won the prestigious Lake Erie League crown in 1947 and finished 2nd to Barberton for the mythical state championship. In basketball, Janowicz held the season and career scoring marks at the time of graduation. His professional career was cut short by an automobile accident prior to the 1956 football season. Janowicz is also enshrined in the College Football Hall of Fame and the Polish American Hall of Fame. Janowicz graduated from Elyria High in 1948. He died February 27, 1996 – a day after his 66th birthday.

Born November 4, 1941 in Cleveland, Walt Rock became a household word for toughness at Elyria High in the late 1950s. A professional football All-pro lineman (1965 Pro Bowl) during his 11-year career with the San Francisco 49ers (1963-1967) and the Washington Redskins (1968-1973), where he was a member of George Allen’s fabled ‘over the hill’ gang. Rock was an outstanding end for Elyria High’s football team and center on the Hall-of-Fame 1958-59 basketball team where he was the leading scorer and rebounder. He was an all-conference lineman at the University of Maryland (right). He was nicknamed Walt “Hard” Rock by the Chronicle Telegram re 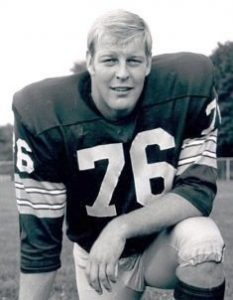 porters of his era. Rock currently resides in the Washington D.C. area where he owns a garage door company. Rock graduated from Elyria High in 1959. While at Elyria High, Rock scored 393 points (16.4 ave) had 326 rebounds (13.5) and had 35 assists for the once-beaten Pioneer basketball team of 1958-59. Rock’s personal best was 31 points against Findlay, an 80-53 Elyria win. As a junior, Rock scored 131 points with a high-game of 22 at Ashland, Elyria’s only regular season loss in his final two years of varsity competition. But it was on the football field that Rock really showed his greatness. He earned a scholarship to Maryland as an end on the Pioneers’ once-beaten football team. He caught a 55-yard TD pass from Richie Poad to help beat Fremont Ross. 24-20. In an era when Elyria rarely threw the ball, Rock led the team in receptions with 11 totaling 298 yards — an average per catch of over 27 yards. He teamed with Bill Mrukowski on both the basketball and football teams and his graduating class of 1959 is still considered the best athletically Elyria High has ever produced. After a distinguished career at Maryland, Rock was drafted by the AFL Kansas City Chiefs in the second round (16th overall) but decided to sign with the San Francisco 49ers of the NFL, who picked Rock in the 2nd round (21st overall) in the 1963 player draft. In five years with the 49ers, Rock started 56 of 63 games. In fact, Rock started his final 56 games as a member of the 49ers. He was named to the Sporting News All-Conference first team in 1966. He joined the Washington Redskins in 1968 and appeared in 74 games for Washington — starting 47. A series of ankle sprains brought an end to his career following the 1973 season. He started the 1972 Super Bowl for the Redskins vs. the Miami Dolphins.

For 34 years, Lorain County Athletes took aim at Joe Scott’s 6-foot-5 high-jump mark without success. It wasn’t until the ‘Fosbury Flop’ method was initiated that Scott’s mark fell. Scott was 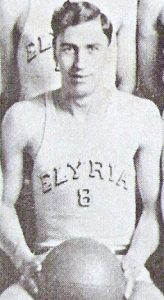 not just a high jumper. He excelled in track, basketball and football as well. As a sprinter, Scott ran the 100-yard dash in an incredible 9.6 seconds and the 120-yard high hurdles in 14.4 seconds – both records in the 1930s. He also managed to throw the shot put 44 feet and the discus 156 feet. Scott was the main cog on Elyria’s state qualifying basketball team of 1936 and was a halfback and punter for the football team. He went on to Western Reserve University where he participated in both basketball and track – compiling 669 points for the track team. Scott won the United States Decathlon Championship – a 10-event test to determine the best athlete in the country – in New York City in 1938 and successfully defended his title a year later in Cleveland. After serving his country during World War II, Scott came back and played a year of professional basketball. He died May 25, 1971. Scott graduated from Elyria High in 1936. 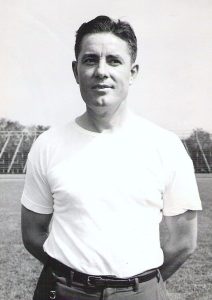 s. He was president of both the Ohio Football and Basketball Officials Association and the Northern Ohio Football and Basketball Associations. Smith was a former commissioner for the Ohio Athletic Conference and vice-president of the College Division Commissioner’s Association. He coached Elyria High football for three seasons (1929-1931). His 1929 team came from a 19-6 deficit to defeat Lorain, 20-19, before over 6,000 fans at Recreation Field in Lorain. His 1930 team won its first seven games before losing its final three. He served as the ESHOF’s first chairman. Smith passed away in 1981.