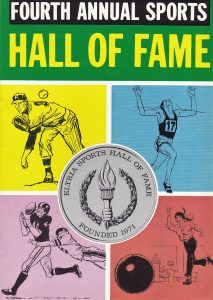 Whenever the history of Elyria High football is talked about, inevitably  Harold “Dinger” 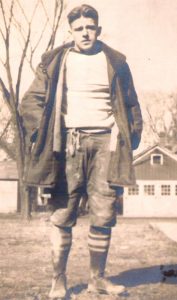 Dangerfield’s name is right at the top. Dangerfield did everything on the football field for Elyria in 1923 – a team that was undefeated on the field – although it forfeited seven games for use of an overage player (Phil Houserman). It did little to diminish the feats of Dangerfield however. He could run, pass, kick and play defense for coach Dwight Peabody, who called Dangerfield ‘the best I’ve ever coached’. It was Lorain that blew the whistle on Houserman just prior to its annual battle with Elyria but it was Dangerfield that scored the lone touchdown in Lorain in front of over 10,000 fans to give Elyria the 7-0 victory and bragging rights. That was a victory no one could take away from Elyria thanks to ‘Dinger’. Dangerfield scored 12 touchdowns that season, drop kicked 10 extra points and his field goal was the only score in a 3-0 Elyria victory over Shaw. Dangerfield also ran for Elyria’s track team. After graduation, Dangerfield went on to play at Penn State where he lettered three years for the Nittany Lions. He was a 60-minute player at Penn State – playing both offensive and defensive halfback. He was labled a fast, stocky, hard-nosed played who never shied from contact. He passed away in 1963.

Prior to Russ Doan’s emergence as Elyria High’s athletic director in 1955, there was little consistency in the athletic programs in any phase. Doan changed all that, directing Elyria’s athletic programs to one of the best and most envied in the state. Under Doan’s leadership, Elyria had undefeated football teams, state tournament basketball teams, conf

erence champion baseball teams, a state wrestling championship and state honors in track and tennis. Doan built a solid coaching staff that had an outstanding state-wide reputation. Under Doan’s leadership, Elyria was the only Buckeye Conference school to win championships in every sport. He retired in June, 1979 after 40 years in the education field – 25 at EHS. Prior to coming to Elyria, Doan spent 16 years at Wadsworth where he was athletic director, head wrestling and baseball coach, and assistant football coach. His 1942 Wadsworth wrestlers won the state championship. Doan was an outstanding athlete at Ravenna and Paris High Schools and captained the wrestling and baseball teams at Kent State. He earned four varsity wrestling letters (1936-39) and three baseball letters (1937-39). He lost only two matches in a four-year career and was undefeated as a junior. He was the Ohio Conference’s batting champion in 1938. He won Kent’s Award of Merit in 1964 and was inducted into the Kent State Hall of Fame in 1982. Doan also played semi-pro baseball around a stint in the Navy. Doan passed away in 2015. 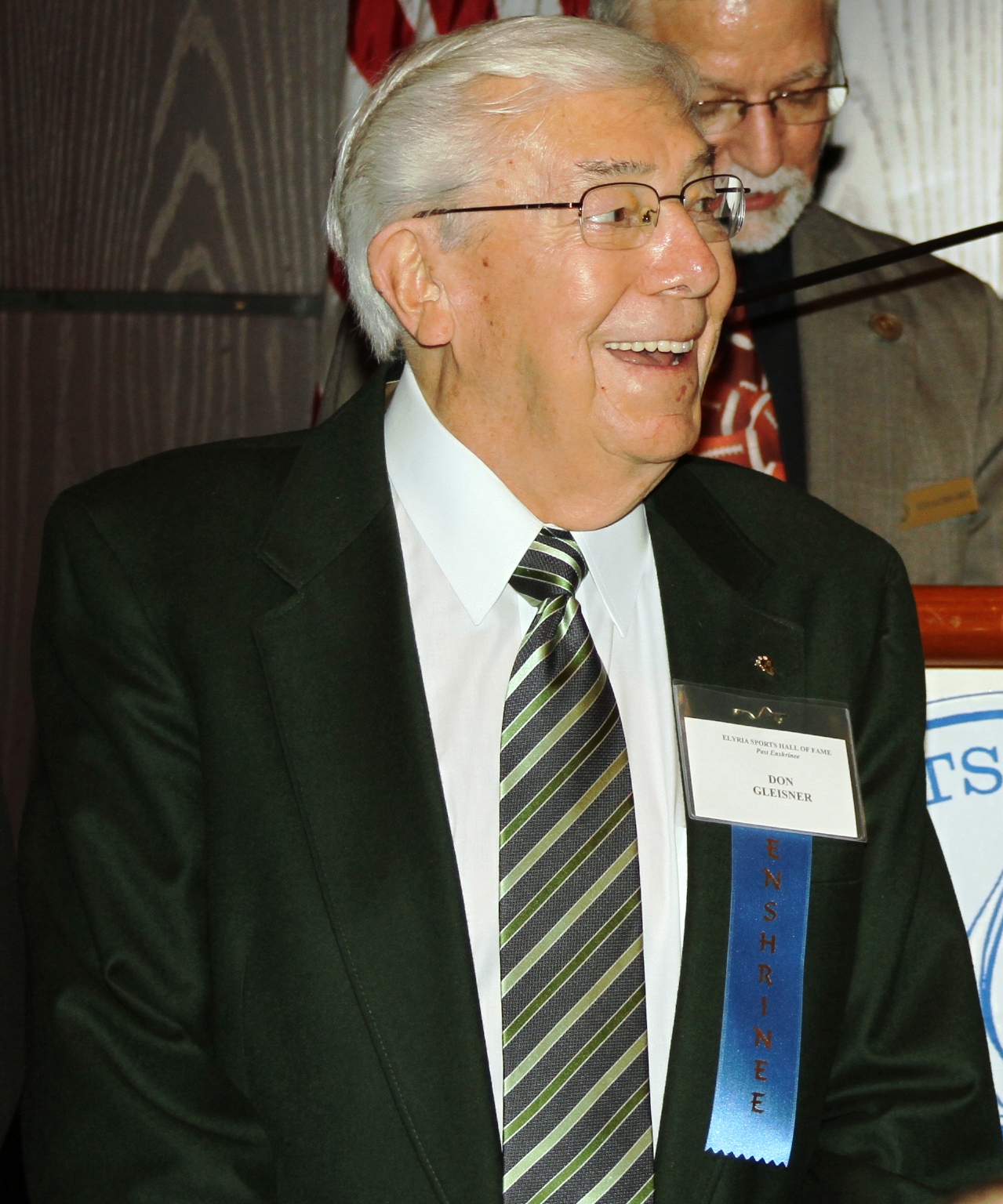 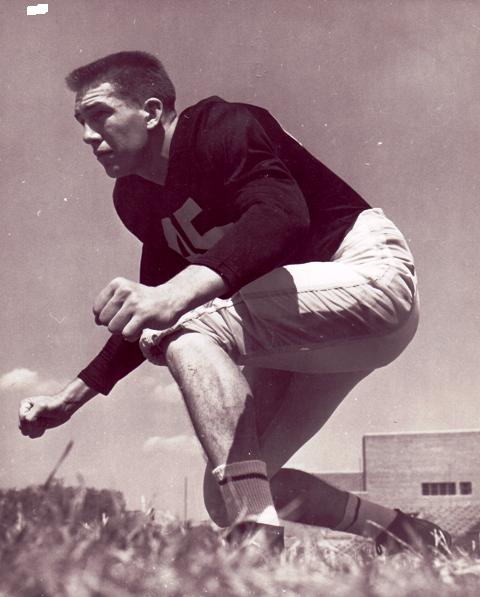 y not have drawn the attention of Vic Janowicz or Tony Curcillo on that team, but he was intrumental just the same in helping the Pioneers win the Lake Erie League championship and finish rated as the second best team in the state behind Barberton. Gleisner went on to Vanderbilt (right) of the Southeastern Conference where he played safety and was named to the All-SEC team. Gleisner set a school record with five interceptions his junior year and rewrote the record a year later with seven picks his senior season. He made game-saving interceptions against Mississippi and LSU and earned individual citations for performances vs. Chatanooga and Alabama. Gleisner switched to defensive back because Vandy had eventual pro quarterback Billy Wade calling the signals. Gleisner played in the North-South game at the Orange Bowl in Miami and had feelers from the Cleveland Browns, Green Bay Packers, Chicago Cardinals, Washington Redskins, and the Chicago Bears along with the Toronto Argonauts of the Canadian Football League. He signed and played with the Bears but an injury cut short his pro career. Gleisner was president of the All-American Company – now owned by Riddell – the nations leading athletic equipment supplier and reconditioner. He passed away in 2012.

One of the legendary names in Elyria sports history, Bill Mrukowski was a 3-sport star and contributor during

some of the brightest years – athletically – the Pioneers have ever enjoyed. Mrukowski played on an 8-1 football team ranked fifth in the state, two consecutive B 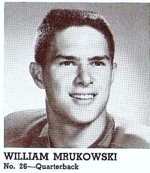 uckeye Conference champion basketball teams and a district champion baseball team. A fullback and defensive back, “Mruk”, as he was nicknamed by fans and sportswriters, was named to the All-Ohio football team alongside classmate and fellow Hall-of-Famer Walt Rock. In basketball, Mrukowski played a prominent role in three district champion teams, helping the Pioneers to an undef 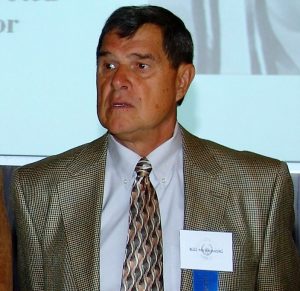 eated season in 1959. That team has since been enshrined in Elyria’s Hall of Fame. He set a school record with 40 points at Berea, a record that stood for 13 years and one of only three EHS players to score 40 or more points in a single game. He played in the North-South Basketball game at Troy following his senior year. Mrukowski went on to claim more honors at Ohio State where on Oct. 14, 1961, he completed 12 consecutive passes against Illinois to set a Big 10 record. He played basketball his freshman year at Ohio State but dropped the sport to concentrate on football. He helped the Buckeyes win the Big 10 championship in 1961 and played in the East-West Shrine game and the Hula Bowl following his senior season. He later became an assistant coach both at Ohio State for two years and Elyria High for one. He had stints as head football coach at Mohawk and Norwalk High Schools. Mrukowski passed away in 2012.

While Elyria has long had a great tradition in women’s sports, Jeri Pomeroy holds the distinction of being the first wom

an selected for the Elyria Sports Hall of Fame. Pomeroy, an outstanding bowler and softball player, was recognized

as one of Elyria’s outstanding bowlers for nearly 30 years. She won the Margaret Henke Trophy signifying her as having the highest average among women keglers. Her 179 average in 1964-65 was the highest recorded in that era. She won the state singles championship at the tender age of 19 and won the all-events championship in the city tournament six times. She rolled 600 series 24 times in 20 years. She was the Elyria Women’s Bowling Association’s first Hall of Fame inductee in the Superior Performance category. Pomeroy was twice a member of the winning team in the city tournament and won the doubles title in 1960-61 with Pat Sanicky. In 1956 she was on the championship team in the Inter-City Tournament at Fremont in 1955. She finished fourth in all-events in the state tournament in 1945, the year she won in singles. In softball, Pomeroy played three times in the World Series and twice in the National Tournament. She was an all-tournament third baseman in the 1950 National Tournament in Phoenix competing for the Chevrolet Queens out of Oklahoma City. Pomeroy graduated from Elyria High in 1943 (right) where she received the VFW award for outstanding performance in athletics as well as patriotism and Americanism. Pomeroy passed away in 2000.