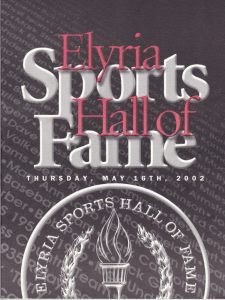 was the man. Campbell led Elyria High’s Buckeye Conference champions in rushing and scoring in the fall of ’64 with 958 yards on the ground in 138 carries – a 6.9 average – and scored 146 points. He led the area in scoring with his 22 touchdowns and 14 2-point conversions. His 146-point total bettered Vic Janowicz’s long-standing school record 101 points scored during the storied 1947 season and remains among the best totals in its history dating back to 1893. The 22 touchdowns Campbell scored is still one of the best all-time for the Pioneers. Undoubtedly, Campbell would have gained more yardage and perhaps scored even more points if it weren’t for such a talented Elyria backfield that included fellow ESHOF’s Houston Love and a scrappy undersized overachieving fullback named Bill Alley. Campbell was named to the UPI’s All-Ohio first team. He

was 2nd team on the Associated Press All-Ohio squad. Elyria finished ranked 3rd in the UPI’s season-ending poll and 4th in the AP. Only Massillon and Canton McKinley were rated better by both polls. Unbeaten Springfield South were rated 3rd in the AP. Unfortunately, the state play-off format was still eight years from being a reality. The Pioneers lost their opening game to Barberton, 6-0, before winning their final nine games including a 32-6 trouncing of then unbeaten and state ranked Sandusky. Elyria capped the season with a come-from-behind 23-14 victory over an inspired Lorain team that led 14-0 in the first quarter. At Sandusky, with a packed stadium that included several hundred fans ringing the track in the end zones, Campbell bulled his way to four touchdowns. His 24-yard run opened the scoring and he finished with 110 yards on the night. Hall of Fame coach Bill Barton called the victory ‘his greatest win.’ Five times Campbell gained over 100 yards during the season. Campbell was named to the All-Buckeye Conference team and led the league in scoring with 122 points – more than double the point total of the second place finisher. As a junior, Campbell rushed for nearly 400 yards and scored 40 points. He was also a member of Elyria’s state tournament qualifier in basketball and was a very good baseball player as well. Campbell went on to play collegiate football at Miami of Ohio.

odbolt – along with fellow ESHOF’s Mac Thomas and John Husband – led Elyria to unprecedented back-to-back 10-0 seasons. The 20-game win streak remains EHS’ longest in its glorious football history that began in 1893. On a team with four players accounting for at least 400 yards on the ground, Godbolt, a junior, led Elyria with 704 yards rushing and nine touchdowns. He scored 56 points to lead the team. A year later, Godbolt roulled up 1.144 yards on the ground – second best all-time for Elyria at the time and still among the best-ever in the history of the school. He led the team with 11 touchdowns and 76 points. In ’68, Elyria’s offense rolled up 2, 437 yards on the ground and 3,237 total yards. In ’69, Elyria amassed 2,795 yards rushing and 3,178 total. For the two years, Elyria outscored its opponents, 598-77. In one of the more memorable games in Elyria history, the Pioneers came-from-behind to nip Sandusky, 13-12, driving from their own 18-yard line with less than five minutes to play to clinch the winning score with just 52 seconds remaining. The ’69 schedule was described as one of the toughest Elyria would ever face. Sandusky (8-2), Marion Harding (8-2) and Lorain (7-3) were all rated very strong. Godbolt’s senior season included seven 100-yard rushing games. His best effort came against Admiral King (165 yards, 15 attempts, 3 TDs). Ten times Godbolt rushed for better than 100 yards in his career. The ’68 team was ranked 4th at the end of the season in both wire service polls (AP and UPI). The ’69 team was second to Upper Arlington in the AP, third behind Upper Arlington and Cincinnati Moeller in the UPI. His son, Tony Jr., joined his father as an inductee in 2019.

f the most prolific scorers in Elyria Catholic history was Bob Holliday. The 6-foot sharpshooter didn’t have the luxury of the 3-point arc in his playing days but he still managed to put hp some pretty fantastic numbers just the same. By the time he graduated from EC, Holliday held every Panther scoring mark – hitting 50 points in a single game against Midview, 557 points in a single season and 1,220 for his career. He averaged 27.9 points per game for the 18-2 Panthers as they christened their Coliseum under Hall of Fame coach Chuck Machock. Holliday sank nearly 50 percent of his field goal attempts his senior season (208 of 419) and nearly 70 percent of his free throws (141 of 208). He was second on the team in rebounds with 166 and led the defense with 34 steals. Elyria Catholic was a perfect 10-0 in the North Central Conference and Holliday was the league MVP. He earned Special Mention All-State in leading the area and his league in scoring. As a junior, Holliday hit 47.5 percent of his field goal attempts (112 of 236) and 60 percent of his free throws (66 of 112). He scored 290 points and was the co-leader on the team in rebounds with 124. He led the league in scoring and was named to the all-North Central team. Holliday went on to play basketball at Baldwin-Wallace but was unable to play due to injury.

Arguably one of the best football teams ever to play in the City of Elyria, the 1992 Elyria

West Wolverines advanced all the way to the Division II regional final and were winning 16-0 before a 75-yard trick play by eventual state champion Fostoria turned the complexion and the momentum of that game. Fostoria went on to win, 26-16 to end the Wolverine season at 11-1. The key performer on defense was Henry Slay, a 250-pound defensive end. Slay led the state’s 3rd ranked team in sacks (13), tackles for losses (25), and recovered fumbles (10). He had more than 100 tackles on the season as West shut out six opponents and outscored their foes, 399-66. Slay was named first team All-Ohio as well as first team All-County, Conference and District. As a junior, Slay made his presence felt as well. He had 81 tackles – 10 for losses in yardage – and led the team with eight quarterback sacks. He was first team All-Lorain County and was already projected as a D-1 College prospect. Slay didn’t disappoint. He was outstanding for the University of West Virginia, earning the Big East Conference award as Defensive Player of the Year. He was selected to play for the Atlanta Falcons and played briefly for both the Philadelphia Eagles and Tennessee Titans.

When it comes to women’s sports, Margaret (Cough) Wear did everyt

hing asked – including driving the bus – in bringing girls high school sports to the forefront. Wear began her association in service humbly enough. She was a school bus driver for the Avon Schools from 1965 to 1974 before becoming the Transportation Supervisor for the Elyria City Schools in 1974 and 75. All the while, she continued her education at Lorain County Community College, Oberlin College and the University of Akron. Wear became a physical education teacher at Elyria High and became Elyria West’s first girls basketball coach for the 1974-75 season. She eventually took over the Elyria High volleyball program (’75 and ’76) and basketball program – both junior varsity and varsity for the 1975-76 and 77-78 seasons. She continued as EHS basketball coach through the 1981 season, compiling an 81-37 record. Her ’78-’79 team advanced to the state tournament in Columbus – the first Lorain County Division I girls team to advance that far. That team was inducted into the ESHOF in 2001. Wear was Athletic Coordinator for both Elyria High and Elyria West programs from 1976 to 1994 and became Athletic Coordinator (Athletic Director) from ’94 to ’97. She was the AD when Elyria’s two high schools consolidated and was instrumental in getting Elyria accepted into the Lake Erie League in 1997 after the breakup of the Erie Shore Conference. Earlier in 2002, Wear was among the first class inducted into the Lorain County Girls Basketball Coaches Hall of Fame and she was named as Lorain County’s Athletic Director of the Year for the school year 1993-94. Wear served many years on the ESHOF board. Mrs. Wear passed away on February 10, 2011.

n with three straight shut-outs, little did anyone know the Panthers were on their way to 26 straight victories and two straight state championships under Hall of Fame coach Jim Rattay. In fact, EC allowed only 20 points all year in qualifying for the Division III playoffs as the top seed in Region 10. The Panthers, behind junior tailback Al McKinney, defeated Fostoria, 13-6, at George Daniel Field in Lorain to start their play-off run. They defeated Leavvittsburg LaBrae, 12-0, at Baldwin-Wallace’s Finnie Stadium in Berea before coming from behind to defeat Urbana, 14-9, at the horseshoe at Ohio State. McKinney raced 69 yards for the

winning score after EC had spotted Urbana a 9-0 lead. McKinney scored from two yards out in the second quarter. Jim Molnar converted after both touchdowns. Tim Coy had a 95-yard interception return in the Fostoria game – the longest interception return in school history. Chico Smith picked off three passes in the Chanel game and Ron Traut returned a blocked field goal 97 yards against Lorain Southview. Those are also EC records. EC rolled through the regular season, blanking Circleville, 13-0, Midview, 27-0, and Chanel, 47-0, to start the year. The Panthers then defeated Toledo Libbey, 34-6 before knocking off cross-town rival Elyria West, 56-7, to begin Erie Coast Conference play. Two more shut-outs followed – 31-0 over Holy Name and 42-0 over  long-time nemesis Lorain Catholic. EC beat Padua, 39-7 before coming up with two more shut-outs – 34-0 over Mansfield Malabar and 55-0 over Southview. The Panthers entered the post-season having outscored their opponents, 379-20. Elyria Caholic had three All-Ohio players – McKinney, Bob Leshnak and Geoff Poyle. 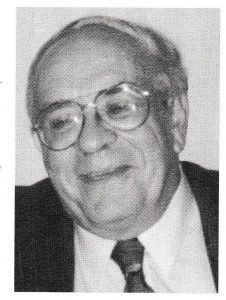 Volunteering has become a way of life for Gordon Cohagen. A former president of Little League East, Cohagen has distinguished himself as a volunteer assistant coach for Elyria HIgh’s highly successful softball team for over 25 years and three state championships. He’s been Ken Fenik’s right-hand man through many years.