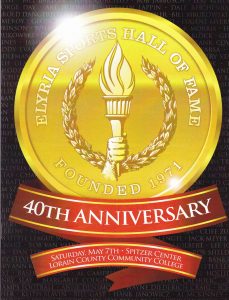 etball and football – leading the Panther basketball team to the “Sweet 16” and leading the football team in rushing and tackling. In basketball, Wilhelm scored 411 points as a senior, averaging nine rebounds a game. He scored nearly 1000 points for the Panther basketball varsity. On the football field, Wilhelm never left the field – setting a school and city record by rushing for 328 yards against Trinity and scoring four touchdowns. Wilhelm earned a scholarship to Ohio State where he was an All-American linebacker on the Buckeye’s National Championship team in 2002. This past season, Wilhelm played on the special teams for the Super Bowl champion Green Bay Packers.

n virtually set every Elyria West rushing mark. He was a letterman in four sports – football, baseball, track and wrestling where he qualified for the 1988 state tournament. He became a three-year lettermen fullback at Akron University. He was the Lorain County Golden Helmet winner in 1987. Nelson was All-Ohio in 1987 and set single game, season and career rushing records for the Wolverines. He piled up 293 yards against Oberlin, tied Cory Wilkerson for single season yards with 1633 and holds the career mark of 3973 yards. He rushed for over 1000 yards in all three years on the varsity.

Fenik, a 1953 Elyria grad, walked-on at Ohio University and proved to be an inspir

ation for overachievers. By the time he graduated, Fenik had not only worked himself to a starting position for the Bobcats but was twice selected on the All-Mid-American Conference team. He was captain for his senior season. After graduation, Fenik successfully coached at a number of high schools in Ohio and later was on the staffs at both Muskingum and Xavier Universities. He was previously inducted in the OU Hall of Fame.

to the regional tournament. Twice he had EC just one step from the state finals and in his final season as head coach, he led Elyria High to its first district championship in 31 years. Walsh, who won 643 games and two state championships during his 42 year career as a head coach, won 80 games at EC and 50 more at Elyria over the course of his final nine seasons. He was on the Panther bench for Elyria Catholic’s only victory over Elyria High during the 2001 Holiday Classic at the Pioneer gym.

Burnett is the only Elyria Catholic wrestler to win three state championships. After p

lacing at state as a freshman, Burnett won state titles at 112 pounds in 1996, 119 pounds in 1997 and 130 pounds as a senior in 1998. Burnett won his last 114 matches and finished with a career mark of 152-4. He was a perfect 36-0 his senior year. Burnett was credited with a staggering 267 takedowns in just one year (1998) and had 741 takedowns during his career. Currently, Burnett assists his brother Erik with Elyria’s summer wrestling program.

The Pioneers, coached by 1973 ESHOF inductee Bill Barton, rolled through the ‘71 season unscathed piling up 336 points and allowing just 44 – none in the fourth quarter and only six points total in the second half. Lorain’s veteran coach Doug Thompson called the ’71 Pioneers the best area football team he’d ever seen after Elyria had beaten his Steelmen, 41-0, to put the wraps on its third undefeated season in four years. Elyria was rated as the second best team in the state in an era prior to the present play-off format. Les Miles, currently the head coach at LSU, was a member and All-Ohio lineman for the Pioneers in 1971. Ike Maxwell was the offensive star – rushing for 1870 yards and 27 touchdowns. The team racked up more rushing yardage (3059) and gave up less (1234) than any other team in school history to that point. Remarkably, the team only lost eight fumbles and had only five passes intercepted. On defense, it picked off 20 passes and recovered nine fumbles. The team beat Toledo Scott, 35-7, to open the season and West Tech, 41-0, and East Tech, 31-0, in non-conference play. The Pioneers opened Buckeye Conference play by beating Marion Harding, 55-6, before routing Admiral King, 54-12. In its three toughest games of the year, Elyria defeated Fremont Ross, 15-7, Sandusky, 19-6, and Findlay, 6-0, back-to-back before finishing the perfect season with huge wins over Mansfield, 39-6, and Lorain 41-0. There were no post-season playoffs at that time so the Pioneers had to settle for the Wire Service Polls to determine the state champion. Elyria was rated second in both the Associated Press and United Press International polls behind Warren Harding. Fremont was rated 7th in both polls.

In addition to the inductees, the ESHOF is honoring long-time football official Ron Carr with its Distinguished Service Award. Carr was a well-respected football official for 27 years, serving as president of the Northern Ohio Officials Association for many years. He also was an assistant baseball coach at Elyria West (16 years), North Ridgeville (four years) and Elyria Catholic (one season) as well as an assistant for Elyria West’s football team from 1992-1995.