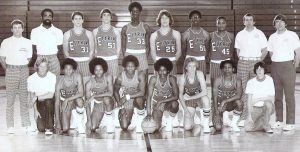 Elyria High set a school record with its 24 wins in 1976-77 – going undefeated in regular season play for only the second time in school history. Under Mike Riley, the Pioneers qualified for the state tournament with thrilling wins over John Adams (39-37) and Toledo Scott (52-48 in overtime) at the Kent State regional before being humbled at the state tournament by defending champion Barberton. In reality, the team probably reached its peak a bit too early in the year. On January 21, Elyria thrashed Buckeye Conference rival and second place Findlay, 88-39. It was worst defeat the Trojans ever absorbed on the basketball floor and the Pioneers followed that up with a 91-55 whipping of Sandusky. For the season, Elyria averaged 67 points a game and gave up only 49.3. Richard Montague, a 6-foot-9 senior All-Ohio center, finished as the all-time leading scorer in Elyria High history with 1,109 points (a mark since eclipsed by Brett Larrick and now held by Louis Tumblin). The starters were Montague, Hubert Oliver, Robert Trice, Steve Lindquist, and Eddie Byrd. Riley’s two top bench players were Mike Warden and 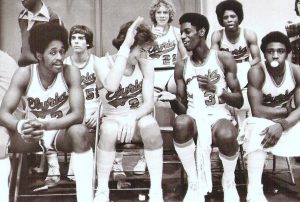