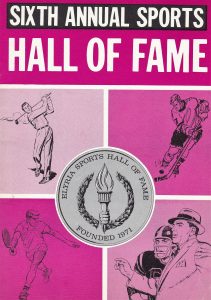 Labeled the “baby fullback” back in the 1930s at Carnegie Tech, Fred Lehmann was no infant when it came to football. Lehmann did it all for Carnegie Tech in an era when Tech played all the football giants of the day – Notre Dame, Pitt, Holy Cross, Michigan State, Duquesne, and Purdue. 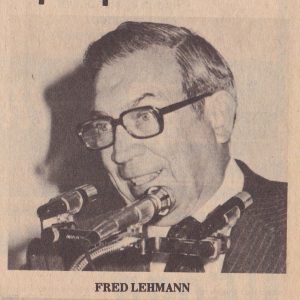 He competed in college at the tender age of 17, 18, and 19 – having three double promotions during his school days in Elyria. He ran, passed, received, returned kicks and was an outstanding defensive player at Carnegie. Lehmann impressed Notre Dame and Temple players and coaches. He was named to each of those school’s all-opponent team. Lehmann was a true scholar-athlete as he made the honor roll on the nationwide Beta Theta Pi team in 1935 and 1936. He was invited to play in both the East-West Shrine game in San Francisco and the Philadelphia Inquirer game – pitting a college all-star squad against the Philadelphia Eagles but he declined both invitations for personal reasons. At Elyria High, in spite of his young age, he was among the scoring leaders in the Lake Erie League. His touchdown against Sandusky helped Elyria pull a 14-13 upset victory over the Blue Streaks in 1932 breaking Sandusky’s 13-game win streak. Elyria’s long-time coach, Roy Clymer, called Lehmann ‘one of the best football players I’ve ever coached.’ Lehmann also captained the basketball team. After graduation at Carnegie Tech, he coached the freshman team in 1937. That group eventually played in the Sugar Bowl against Texas Christian. Later, Lehmann became an executive with the B.F. Goodrich Co. in Akron.

Whether on the tennis or basketball courts or the baseball diamond, Byron Morris became one of Elyria’s best multi-sport athletes. Morris earned nine letters at Elyria High – four in tennis, three in baseball and two more in basketball before going to excel at the College of Wooster where he earned seven more letters – three in baseball, and two each in tennis and basketball. 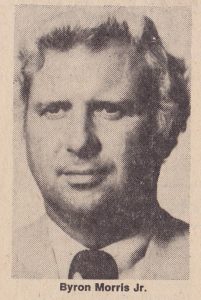 Morris’ 1.12 earned run average in 1954 is still the standard for the Scots. He was awarded “The Manges Prize” after his senior year – given to the outstanding athlete at Wooster. In Elyria, Morris won the city junior tennis championship three years in a row from 1949 to 1951 and he nearly won the men’s title in ’51 – losing in the finals to fellow Hall of Famer Leroy Johnson. In baseball, he hurled a pair of no-hit shut-outs for the Post 12 American Legion summer team. On the hardwood during the 1950-51 season, Morris scored 27 points in a victory over Fremont and scored 21 against favored Cleveland West at the Berea District to lead Elyria to a 69-56 victory. The Pioneers and Cowboys combined to set a tournament single game scoring record at the time and Elyria’s 224-point total for the four-game tournament set a single team mark at the time (56 points a game). He retired as head of the admissions department at his alma-mater in Wooster where he graduated in 1957. His brother Donald is also a member of the Elyria Sports Hall of Fame.

Joining his son Bill in the Hall of Fame to become the first father-son combination so honored, Frank Mrukowski certainly doesn’t need to take a back seat to anyone. The senior Mrukowski participated in five different sports at EHS in the 1930s, but his specialty was football. During the 1933 season, Mrukowski set a Lake Erie League record with 100 points that included a 94-yard touchdown run against Toledo Central Catholic and a 50-yard field goal against Lorain – a record kick that still stands today for Elyria High School. Mrukowski played in an era of single platoon 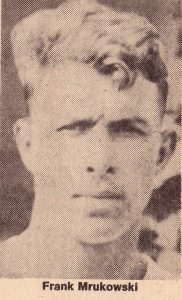 football – playing both ways. He was a linebacker on defense and a blocking halfback his junior year and fullback his senior year. Russ Davies – the Chronicle Telegram Sports Editor at the time – described him this way: “Mrukowski could do most anything with the football. He could run, pass and kick with almost equal ability. As a defenseman, he had no superior.” He was voted to the second team All-Ohio, missing a first team rating by just one vote in an era when only 11 players were named to the first team. Mrukowski was the center on the basketball team two years and once participated in a boxing tournament – reaching the finals when, suddenly, the tournament was cancelled with no champion. In the spring, Mrukowski played softball on weekdays, baseball on weekends while also participating for the high school track team. He once raced against the legendary Jesse Owens. Mrukowski retired from Republic Steel in 1976 after 40 years of service.

It may have been just one grand season that pushed Dwight “Ike” Truby to his place in Elyria’s Sports Hall of Fame – but it certainly was “the big one”.  It’s impossible to talk about Elyria 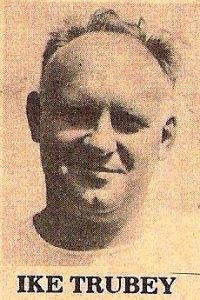 football without talking about the 1947 season when Truby coached the undefeated Pioneers. He joins a number of his players off that squad into the Hall. Truby was a great athlete himself – earning all-Ohio honors in basketball on Dover’s Class A state champions in 1927. He went on to be named all-state at Wittenberg in football. He was an assistant coach to John Brickels at New Philadelphia for two undefeated teams in 1934 and 1935. He took over the head coach position at Fostoria for seven years with three of his teams posting perfect seasons. In 1943, Trubey came to Elyria and was 27-16-2 in his five seasons. Four of his teams had winning years. He left Elyria after that famous ’47 season to become an assistant coach at Purdue and went on to assist his former college roommate Bill Edwards at Vanderbilt for two more years. He returned to Elyria and worked for the All-American Company before ‘retiring’ to become a clerk with the Municipal Court.

Seldom has one man been appreciated by so many. From the time he arrived in Elyria in 1950 until his untimely death at the age of 48 in May, 1970, Ray Wilson was a coach and friend to countless young men. For Wilson, the kids always came first whether it was baseball, football or hockey. He was a living definition of the word ‘discipline’ and believed there was no substitute for hard work. He led by example and demanded no less from the kids he worked with. They loved him for it. Charles Raymond Wilson (he never used his first name), assisted on the football team from 1954-64, and as head coach of the baseball team, he compiled a 60-26 mark from 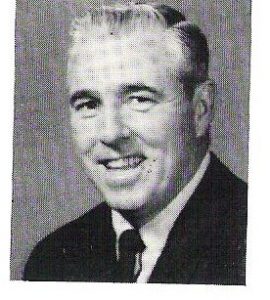 1954 to 1961. In ’64 he moved to Northwood Junior High to coach football and track and organized the city’s amateur ice hockey program. He was recognized as ‘Mr. Hockey” in Elyria and was instrumental in getting the ice rink opened at North Recreation. During the summer months, Wilson, who was born in New Philadelphia and grew up in Cleveland, worked in the recreation department in Shaker Heights where he was director of the Red Raider Summer Camp. He also was involved in local sandlots at the Hot Stove, American Legion, and Class A levels.