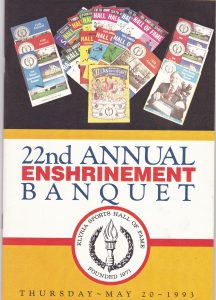 Known primarily as an outstanding bowler, Dot Boreski paved the way for women’s role in track, softball and basketball back in the 1930s. Northern Ohio was a hotbed f

or women’s softball in the late 1930s through the 1940s and Boreski made her mark playing with and against the best. She began honing her diamond skills as a student at North Ridgeville. Over the course of the next decade, her softball accomplishments earned her wide-spread recognition. Soon she was being recruited by teams all over the northern part of the state. In 1939 she was a member of the Akron Roverettes, who once played an indoor game at the famed Madison Square Garden in New York. She later played in the national women’s softball tournament as a member of the Dayton Morain Products team. As a pitcher Dot fired a perfect game against Lorain in 1939. At the same time her softball career was getting underway, Dot was also making her mark in track. She won the broad jump in the Lorain County track meet and was a member of the Rangers’ winning relay team. In the winter months, Boreski turned her attention to basketball. She was a teammate to the famous Cleveland athlete Stella Walsh on the squad that won the AAU championship. Dot beat out Walsh for MVP honors in that tournament. In the 1950s, Boreski shifted her efforts to the bowling lanes where she had much success for many, many years. A consistent high scorer, she earned the All-Events title in the 1971 Elyria Women’s Bowling Association City Tournament. She came back in 1986 to win the tourney’s championship teamed with Barbara Kaminski. In 1974 her 267 single game was the highest of the entire season for area women bowlers. Dot’s bowling achievements earned her selection to the 1975 EWBA Hall of Fame. She passed away in November, 2013.

Elyria High School has produced a number of outstanding football players, but 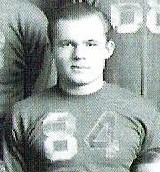 eteran mentor Roy Clymer. In Czak’s final game at Elyria High in 1936, he scored all the points in the contest as Elyria defeated its biggest rival – Lorain, 12-0. He earned two letters and all-league honors in high school. He also was the recipient for the Agenda Trophy for sportsmanship. Czak went on to the University of Michigan (left), earning two letters and playing three years. He played on the same Wolverine team with the legendary Tom Harmon and Forrest Evashevski. Michigan, a perennial national power, had so much talent in those days that to just make the team and earn two letters is a feat as great as starring on a smaller college team. Had Czak gone to a smaller school, he may have been an All-American. Czak scored two touchdowns for the Wolverines, one of them captured on the front sports pages of one of the Detroit daily newspapers. Michigan never lost to Ohio State while Czak was there and he was on the field with Harmon when the Wolverines routed the University of Chicago, 85-0. Czak passed away in June, 2008.

s no coincidence that you found a winning team wherever Tom Szabo played football and baseball. Szabo was a key performer on the two straight undefeated Elyria football teams in 1968 and 69. On the baseball diamond, Szabo was a key pitcher for a pair of Pioneer teams that combined for a 39-9 record. He went on to Ohio State and played briefly on the football team during the Woody Hayes glory years before a knee injury curtailed his playing time but he contributed to the baseball team that played for the Big 10 championship. Szabo was a 6-foot-1, 220-pound tackle and defensive linebacker for the Pioneers. He earned honorable mention in the all-conference voting his junior year. A year later, Szabo was named All-Buckeye conference and earned mention on the All-Ohio team. On the baseball field as a junior, he combined with two other pitchers in hurling a no-hitter and helping Elyria to an impressive 17-3 record. As a senior, he pitched the only perfect game in Elyria High history, a victory over Midview. Elyria finished with a 22-6 mark, setting a school record for victories in a season at the time. He pitched on the first Elyria High squad to play in the regional finals. In two years, Szabo was 14-2 with an ERA of 0.58 as a junior and 1.20 as a senior. At Ohio State, he lettered in baseball, earning a spot in the starting rotation. He played two years before the football injury flared up.

. He was a member of the swim team at Lakewood High and Muskingum College. After graduation in 1966, he joined the Peace Corps and spent three years in Botswana teaching math and science to village children and how to play baseball. In 1971, Wessely began teaching math at Elyria High and organized a swim team at the Elyria YMCA. Over the next 22 years, his teams captured 10 first place trophies and 11 second place finishes in the Northeast Ohio NEO YMCA Swim League. In 1977 he was honored as the Outstanding Young Educator by the Elyria Jaycees. His coaching philosophy was simple – no one gets cut and everyone performs to the best of their abilities. That work ethic earned him and his teams a 146-13 record. It has been calculated that Wessely spent over 10,000 hours of his time in community service. Wessely figured when he first arrived in Elyria, he spend about five years and move on to better things. After 22 years, he remained a guiding force in an outstanding program. It is his dedication to youth and swimming that earned him a berth in the Elyria Sports Hall of Fame.

a in Columbus. At stake was the state championship, a prize no other Elyria team in any sport had captured to that time. Pierson was confident. He had watched Ricky Lewis, Kenny Redd, Larry Beal and Mike Sittinger mature under his tutelage and he knew his own version of the “Big Red Machine” was capable of greatness. The championship came down to Elyria, Akron Garfield and Mentor and the lead changed hands three times on that March night but Lewis put away his opponent, the muscular John Steele of Oak Hills, in a convincing 3-1 win to grab first place in the 126-pound class to put the state crown within reach. In the end, Elyria edged Garfield by two points, 36-34. Beal finished third in the 155-pound class, Redd fourth at 98, and Sittinger sixth at 145 pounds. 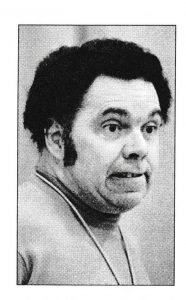 Doug Donaldson
For 32 years Doug Donaldson and Eastern Heights Junior High were synonymous. You couldn’t have one without the other. Donaldson graduated from Kent State in 1955 and that fall begin his career as a teacher and coach at Eastern Heights. The number of lives he touched during those 32 years is obviously countless. Donaldson was the consummate team player — always getting his teams ready to compete and participate at Elyria High once they left Heights. He never took himself too seriously. He always had a touch of sarcasm and interjected humor when the need was there and he always understood his teaching position took precedence to his coaching. Donaldson passed away in May, 2020.