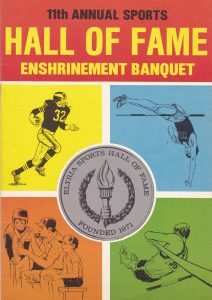 e field – look no further than Ted Carpenter. Carpenter, all of 135 pounds in high school, starred on Elyria High’s football team in the late 1920s both as a back and end. In track, he competed in the pole vault, the high jump and the long jump (then known as the broad jump). After graduation in 1927, Carpenter attended Ohio State and upon graduation in 1930, played sandlot baseball in the area but he probably will be mostly remembered for his bowling accomplishments. He is a member of Elyria’s Bowling Hall of Fame partly because he averaged a score of 189 over a 30-year period. Talk about consistently being at the top of his game! He served the Elyria Bowling Association in a number of capacities including president and also served on the board of trustees for the Elyria Sports Hall of Fame. After retirement, Carpenter helped found a senior golf league and was in charge of that for two years. He also served as an industrial landscaper to the Lorain County Metro Parks board of commissioners. Carpenter was in the nursery and industrial landscaping business for over 40 years.  Carpenter passed away in 1990.

s “Chuck” Decker has the distinction of being the first. Decker, a versatile athlete, won the 1937 state pole vault championship with a vault

of 12 feet, 11 inches. Decker made the leap using a bamboo stick and his record leap stayed on the books until 1956. Decker also excelled in the low and high hurdles and played on the basketball and football teams as well. As a halfback, Decker helped Elyria to a co-championship with Lorain in the Lake Erie League in 1937. He scored 48 points that year – tops in league play. Former Chronicle-Telegram Sports Editor Russ Davies once described him as ‘the fastest runner ever to wear the Crimson uniform.’ He also competed in the Golden Gloves competition – finishing runner-up in 1938 at the middleweight division. Decker went on to a great three-year career at Michigan as a pole vaulter, where he schooled with such standouts as Tom Harman and Don Canham. He competed at the prestigious Millrose Games at Madison Square Garden in New York. He cleared 13 feet, 10 ¾ inches to set the school record at a dual meet in Pittsburgh. After a stint as a pilot in World War II, Decker returned to Elyria in 1946. He worked and owned a variety of businesses before arthritis forced him to retire in 1975. He helped form and coach the Elyria Long Blades Skating Club.

Talk about service to a community and the name Charles Hoagland immediately jumps out at you. Ironically, Hoagland couldn’t even pronounce the name ‘Elyria’ when he first moved

here from Lexington, Kentucky but now his mark is stamped all over it. As director of Elyria’s Recreation Department for 24 years, he led the growth of Elyria’s program to one of the finest in the state. In 1956, when Hoagland first moved here, the Recreation Department had 43 acres of land at West Park, including four tennis courts and four ball diamonds under its authority. Cascade Park was under the control of the Park Board. Hoaglund had no staff and a budget of $18,000. By the time he vacated the post to become Safety-Service Director in 1980, the department had built parks on the North, East and South sides of town, taken control of Cascade Park, built the Recreation Center on Prospect St., put in the facility at Hilltop Park, added four swimming pools, an ice rink and took over the Finley Estate on Abbe Road. At one point, Hoagland had 26 full-time employees and his budget was right around a million dollars. Many of the improvements were due to combining the Parks and Recreation Department in 1965 and to the bond issues passed by the citizens of Elyria, but the concept of the neighborhood parks was Hoagland’s vision. His department established many after-school and summer programs. He directed the state softball tournament at West Park. Despite his busy schedule, Hoagland found time to coach St. Mary’s CYO football team – racking up eight undefeated seasons and 11 championships. He also managed an Elyria East Senior baseball team to three championships.

Whatever role he was asked to play, D. Richie Poad, an honor student, gladly accepted the challenge whether it be on Elyria High’s or Rutgers University football teams. Poad, who d

ied in an automobile accident in 1973, was a star performer for Elyria in football, basketball and tennis and took his talents to Rutgers. In 1959, Poad led the Pioneers to a Buckeye Conference football championship – switching from quarterback to halfback. He was instrumental in wins over Sandusky and Lorain. The Steelmen were ranked as the third best team in the state but 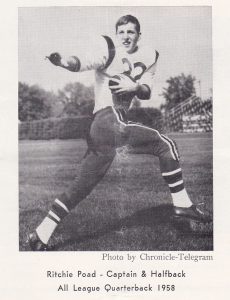 Poad and Co. managed to beat Lorain, 14-6, to claim a three-way share of the Buckeye Conference crown. He gave Coach Bill Barton a threat to run or pass from his halfback spot. He also played an important role in Elyria’s ‘Bird Dog’ defense. Poad was a key performer on the 1958 squad as well – a team that finished 8-1. He was first team all-Buckeye Conference as a quarterback and drew honorable mention in the All-Ohio voting. The highlight of the ’58 season came when Elyria defeated Lorain, 12-8, marking the first time Elyria had beaten its bitter rivals from the north two years in a row since 1936 and 1937. Poad engineered the winning drive with four of four passing as the Pioneers drove 87 yards late in the third quarter. And, it was Elyria’s first victory at Lorain since 1944. Earlier in the season, Poad hooked up with fellow ESHOF’s Walter Rock for a 55-yard TD toss that helped beat Fremont Ross. Poad actually dressed and played on the varsity as a freshman at EHS – unprecedented even today.  At Rutgers, Poad again was asked to switch from quarterback to linebacker for the Scarlet Knights. Poad’s legacy continues at Elyria High, where a trophy and scholarship is awarded each year in his name.

Any talk of Elyria High football begins with the legendary undefeated 1947 team. Led by the incomparable Vic Janowicz, Elyria swept through its nine game schedule unscathed – finishing with a 7-6 victory over its archrival Lorain. Elyria finished the season ranked second in the state behind Barberton.  Janowicz, later the Heisman T

rophy recipient at Ohio State, rushed for 1,032 yards in 138 carries – an amazing 7.5 yards per carry average. He led the Lake Erie League with 101 points, scoring 14 touchdowns and kicking 17 extra points. Janowicz and teammates Howard Schuster, Ralph Moyer, Jim Lear, Ollie Glass, and Tony Curcillo were all named to the All-LEL team. Janowicz was named All-Ohio for the second straight season. Elyria’s most one-sided victory was a 39-7 pounding of then state-ranked Fremont. The team was coached by Hall-of-Famer Dwight ‘Ike’ Truby. Elyria opened the season with a 19-12 victory over Toledo DeVilbiss and followed that up with a pair of shut-outs – 40-0 against Sandusky and 27-0 against Shaker. It then defeated Lakewood (18-7) and Youngstown South (27-19) before getting past LEL rivals Cleveland Heights, 20-12, and Shaw, 13-6, to set up the Fremont and Lorain games to close out the year. Elyria outscored its opponents 210-69.