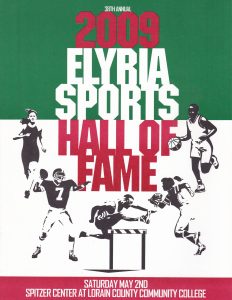 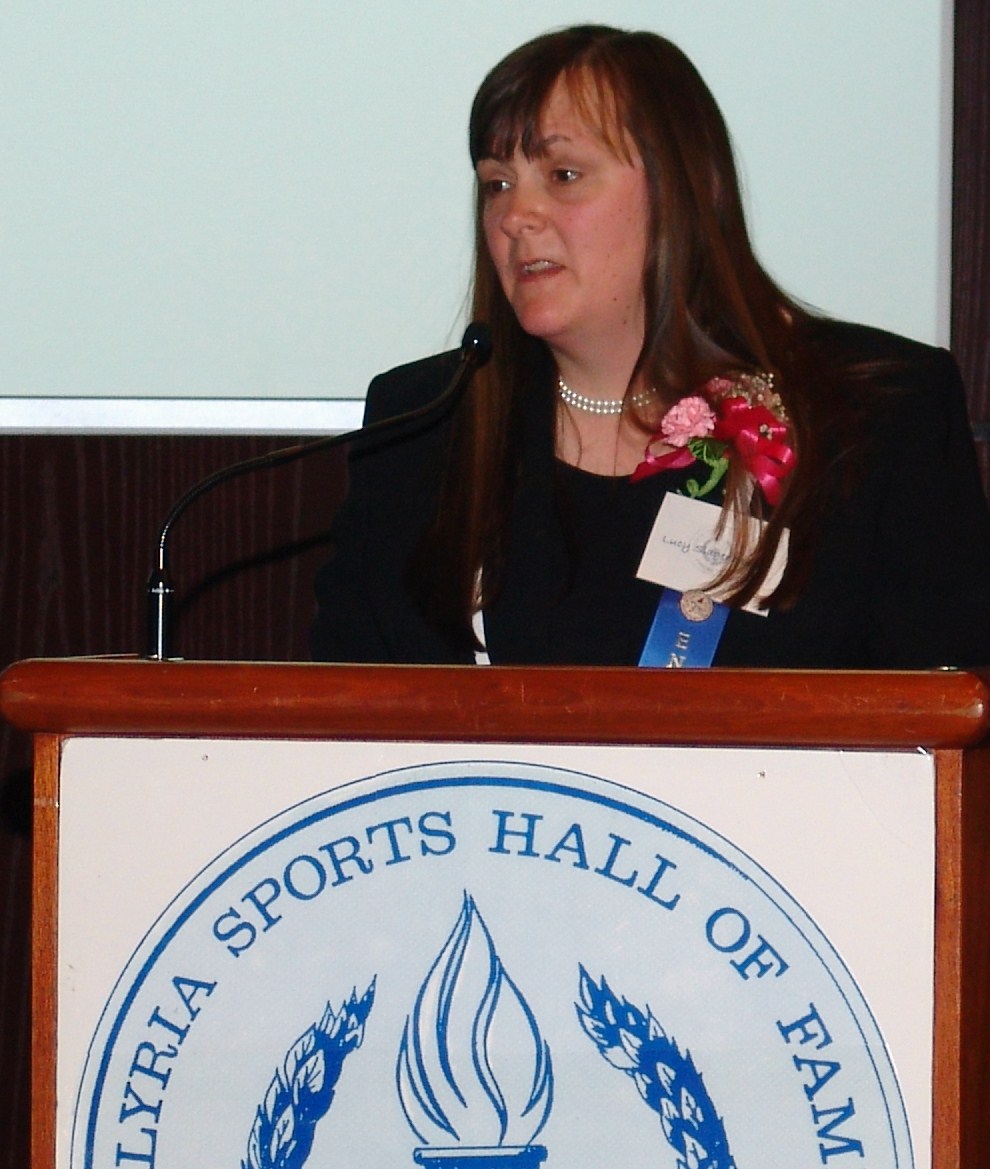 of Elyria High, Lucy Slager Mraz was the first Lorain County volleyball All-Ohio selection as a senior in the fall of 1984. Mraz also lettered in track and basketball at Elyria High and is the daughter of Hall-of-Famer Bob Slager, the long-time track coach at EHS and Coleen, both of Elyria. As a senior, Mraz led the team in hitting and was named the MVP. She was first team All-Buckeye Conference and won the Jaycee’s Women’s Sportsmanship award. She played for Carol Russo, another member of the ESHOF. Mraz held the women’s discus record at Elyria 15 years. She married Dean Mraz in 1991. They reside in Elyria. 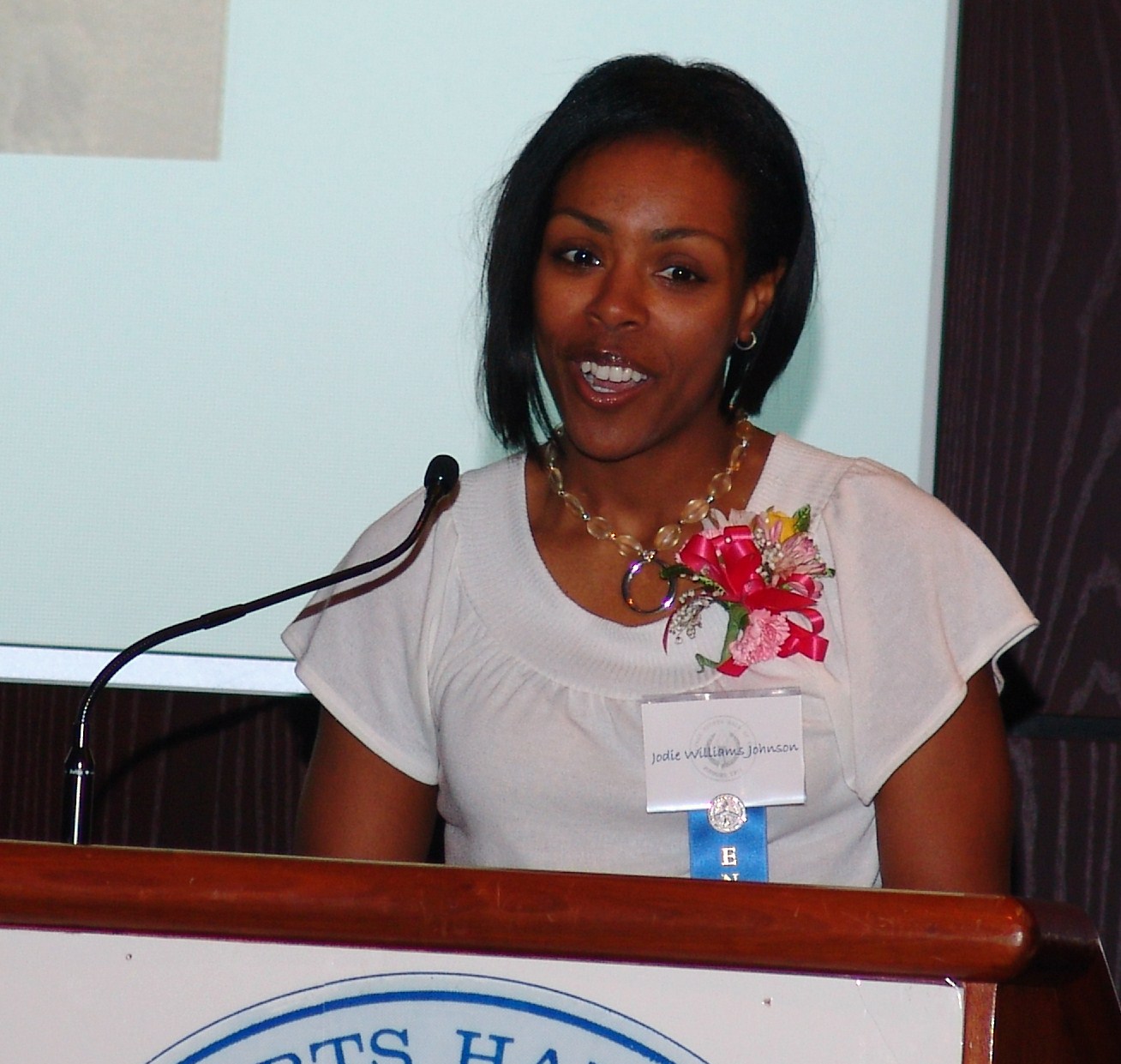 ams Johnson, an Elyria High grad in 1995, was a key player on Elyria’s state tournament volleyball team in 1994. Johnson, the current Elyria High varsity volleyball coach, was named Miss Volleyball in Lorain County in 1994 and was 3rd team All-Ohio as a junior and 2nd team All-Ohio as a senior and was District III player-of-the-year. She was the Erie Shore Conference player of the year both as a junior and senior. She also lettered three years in basketball. She was a four-year varsity starter at Edinboro College and was the captain her senior season. She is a member of Edinboro’s 1000 kills club. She is married to Isaac Johnson, a former basketball and football star at Elyria and are the proud parents of Isaiah. Jodie is the daughter of J.D. and Linda Williams. 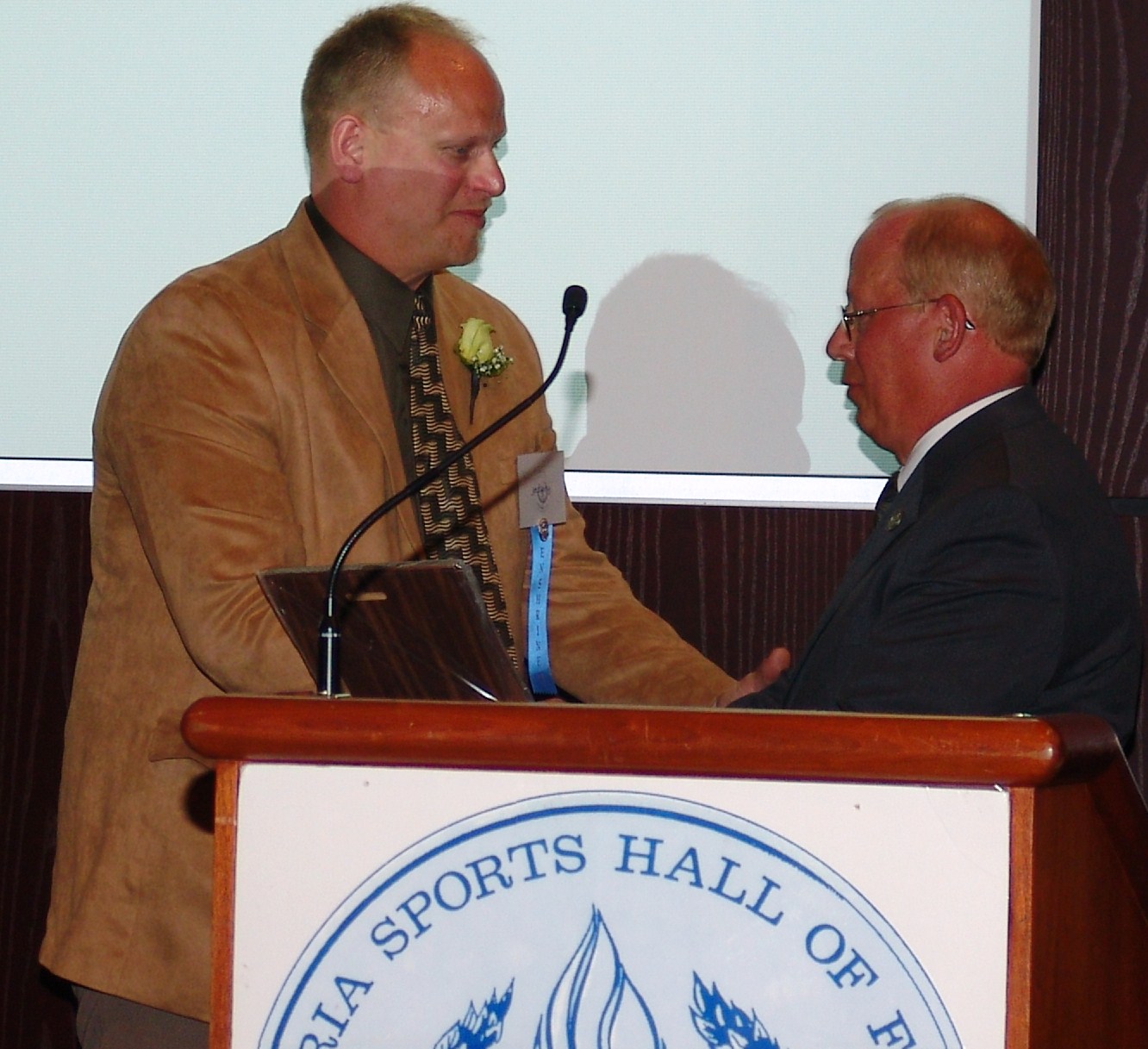 o-way tackle Joe Savoy was certainly a key to both titles. Savoy, an All-Ohio selection in 1984 dominated both sides of the ball for the Panthers. Savoy was the lineman of the year in both conference and district selections and earned a scholarship to Rutgers. At 6-foot-4, 225 pounds, Savoy and fellow Hall-of-Famer Geoff Poyle, led the blocking for Al McKinney, Lorain County’s Golden Helmet winner and another member of the ESHOF. Savoy’s graduating class at EC finished with an unprecedented three-year varsity record of 37-1. Both of EC’s state champion teams have already been inducted into the Hall. Joe is an insurance agent in Elyria.

eichenbach, Elyria High’s legendary basketball coach, said all you need to know when it comes to Sam Davis. “Sam Davis was the best basketball player I ever coached,” Reichenbach said back in 1999 when the 1958-59 Elyria High team was inducted into the ESHOF. “We had some glorious years in those days, and I had many, many great players but Sam was the best. He could do anything on the court and was quick as a cat.” As a sophomore in 1958, Davis scored 18 points in helping Elyria defeat John Marshall for the District title at BW. On the undefeated Buckeye Conference champion a year later, Davis scored 344 points for the Pioneers – second only to Walt Rock and one point more than Bill Mrukowski – both Elyria Hall-of-Famers. As a senior, Davis led Elyria to its first appearance in the regional finals with 399 points, 108 assists and 277 rebounds. In his three years with the varsity, Elyria High won 64 games and lost just seven times. Davis played college basketball at Texas Southern and was invited to try out for the Detroit Pistons. Davis also ran track and played football at Elyria. He passed away in 2003. 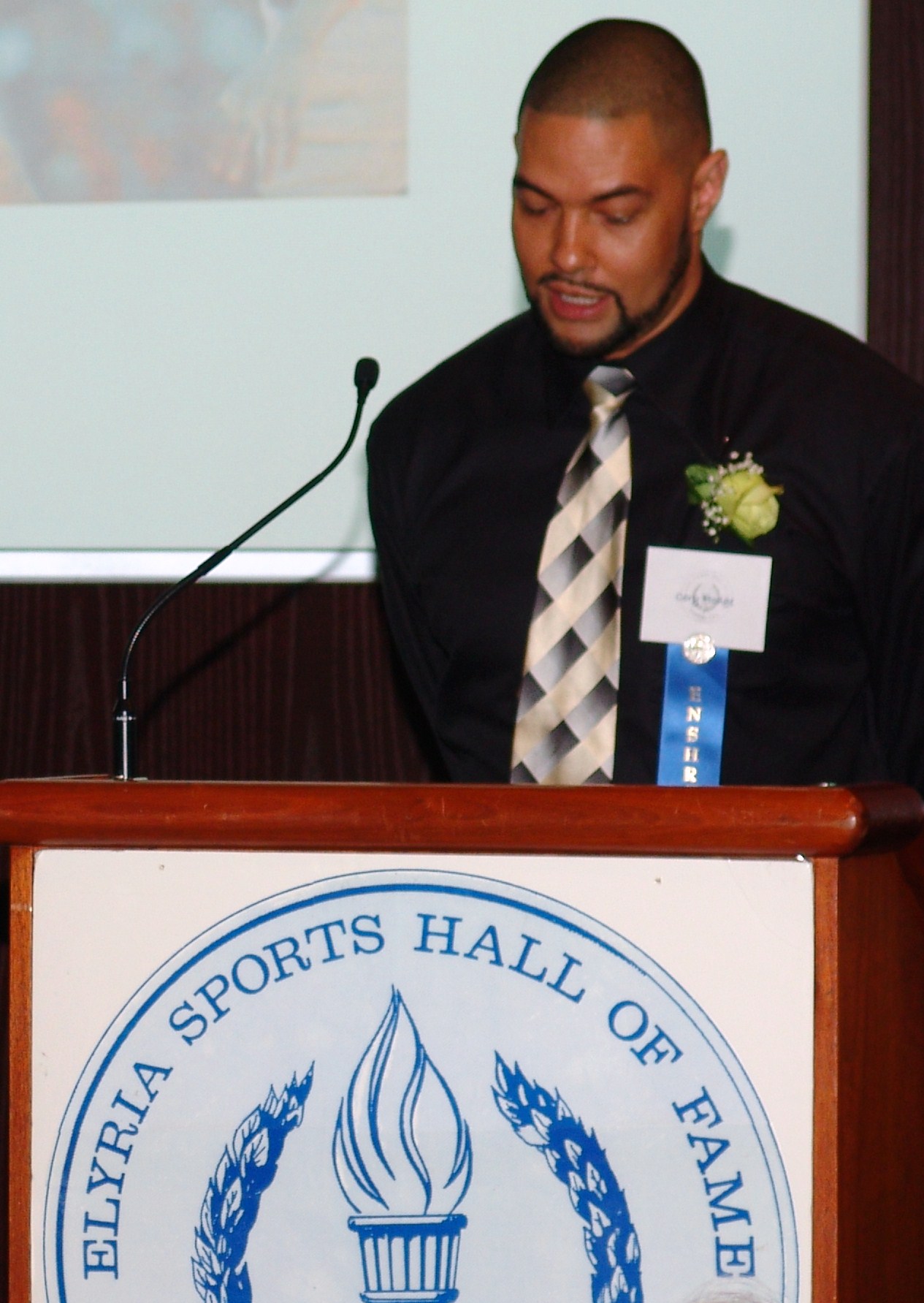 Elyria Catholic, Bob Guinta turned out a lot of great teams and had a number of outstanding players, but one of his personal favorites was Cory Hodge. As a sophomore, Hodge scored 147 points as EC finished 15-8, but a year later, Hodge was EC’s leading scorer (334 points) as the Panthers won 19 games and lost just 4 including a heartbreaking 48-47 loss to Olmsted Falls in the District semi-final. In Hodge’s senior year – and Guinta’s finale as head coach of the Panthers — Elyria Catholic nearly qualified for the state tournament – losing in overtime, 72-70, to Mansfield Malabar with Hodge leading the effort with 22 points. That year, Hodge led EC in scoring and rebounding with 482 points (18.5 average) and 240 rebounds. In the regional semi-final against Elida, Hodge scored 24 points – hitting 11 of 15 from the field and both his free throws in a 66-52 victory. Elyria Catholic was 22-4 and Hodge was named to the second team All-Ohio. A 1988 EC grad, Hodge went on to Oberlin College and now resides in the Detroit area.

Joining its predecessors from the year before, Elyria turned in an undefeated season and wound up ranked as the second best team in the state. Now this team joins the 1947 and 1968 EHS football teams in the Elyria Sports Hall of Fame. The Pioneers rolled through their first six games with no problem but then found themselves trailing Sandusky, 12-7, with just 4:47 left and 82 yards away from the end zone. In front of an estimated 9,000 fans at venerable Ely Stadium, Elyria marched the distance behind its Golden Helmet winning fullback John Husband. Husband carried six straight times to give Elyria a first down at the S-26. On a fourth down play at the S-17, Elyria drew the Blue Streaks off-side to keep the drive alive and then surprised Sandusky with a Brad Barton to Mac Thomas pass for the winning score with just 52 seconds left. The Pioneers defeated a fired up Marion Harding team a week later, 24-19, at Marion and finished up with big wins over Fremont Ross and Lorain. Elyria was ranked 2nd in the Associated Press poll and 3rd in the UPI. There were no play-offs in football at that time. Husband, Thomas, Tony Godbolt, Tom Szabo, Dick Armstrong and LaRond Corn were named first team All-Buckeye Conference. Godbolt rushed for 1144 yards, Husband right behind at 814. Elyria outscored its opponents 297-53 for the year.

Since 1998, the Chronicle-Telegram’s Ed Betzel has designed and organized

the program for the Elyria Sports Hall of Fame banquet. The program has been a keepsake to everyone who has attended the banquet – whether an inductee, a family member or just a casual fan. The ESHOF committee honored Ed with this year’s Distinguished Service Award for his outstanding contributions to the organization.