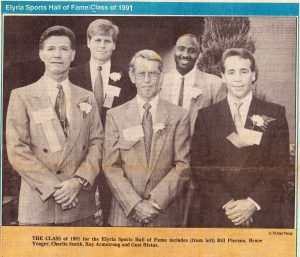 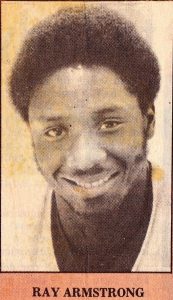 te sprinted his way into Lorain County history as a senior in 1979, winning three state Class AA track championships. His strong legs carried him to wins in the 100-, 220-, and 440-yard dashes, victories that led the Wolverines to a second place team finish in Columbus. The 220-yard victory was his second straight state title. Only one other Lorain County athlete was able to achieve the triple feat to that point – Ralph “Bunny” Fields in 1932. Armstrong’s impressive accomplishment capped an outstanding high school athletic career. In addition to the dozens of track victories, the three-year letterwinner set and reset county sprint records, becoming the first Lorain County high school performer to run the 440-yard dash in under 49 seconds. Armstrong didn’t limit his exploits to track. He excelled on the gridiron, lifting the Wolverines to a share of the Erie Shore Conference championship in 1978. Tabbed as “unquestionably the fastest football player ever at West High School, Armstrong rushed for 1,204 yards as a senior to become only the second gridder in West history to rush for better than 1, 000 yards in a season. That football prowess earned him a scholarship to West Virginia University where injuries cut his career short. However, he did start some games for the Mountaineers his freshman year, showing the promise he had shown as a Wolverine. Armstrong pursued a military career after his West Virginia days and was a part of Operation Desert Storm. His unit was deployed in Iraq where it supplied jet fuel to helicopters on the front lines.

Elyria High has known no better wrestling coach in its long history than Bill Pierson. A science teacher who retired in June, 1995, his accomplishments as head wrestling coach from the mid-1960s to 1980 rank him among the best Lorain County coaches ever. His record 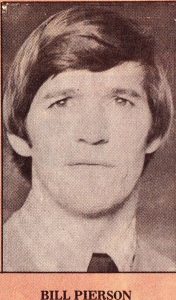 speaks for itself. In 1973, Pierson guided the Pioneers to the school’s first state championship in a team sport and his 1967 team finished third. He captured nine Buckeye Conference titles. He coached 55 wrestlers to Buckeye Conference Tournament championships. He saw 19 of his wrestlers qualify for state tournaments and he coached four individual state champions. One year after leading Elyria to the state title, Pierson was forced to retire from coaching the Pioneers due to a back problem that prevented him from being able to teach through participation. His retirement was short-lived. A year after resigning his head coaching position at Elyria, Pierson accepted the job to coach Lorain County Community College wrestlers. He returned to Elyria to assist three more years and was the head coach in 1979-80 before finally hanging up the whistle for keeps with a final record of 91-15-3 under his belt. His four individual state champions were Lanny Bush and Wilbur Lewis in 1967, Tim Swiegard in 1972 and Ricky Lewis in 1973, He also mentored 19 individual state qualifiers and 55 Buckeye Conference champions.

Gust Ristas was one of the greatest wrestlers the city of Elyria ever produced. Ristas began his grappling career at Elyria Catholic and went on to wrestle at both Lorain County Community College and the University of Toledo. Ristas’ career at EC was phenomenal. His career mark was 72-10. As a junior and senior, he was just about unbeatable – going 22-1 as a junior and 29-3 in 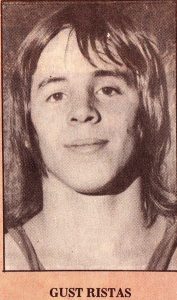 those seasons. Ristas also was a three-time North Central Conference champion and the league’s Most Valuable Wrestler. In his senior year, Ristas led EC to the sectional title as he won the 126-pound individual class crown. He finished fifth in that year’s state meet, losing two bouts in overtime and one on a referee’s decision. Ristas spent one year at LCCC. He won championships at the LCCC-Cuyahoga West tournament and the Michigan Invitational. He went on to wrestle three years for Toledo, finishing 26-4 in dual meets and third place in the MAC his junior year in the 134-pound weight class. As a senior co-captain of the Rockets, he was undefeated in dual meets and won tournament titles at Wright State, Indiana State and the Toledo Open. His biggest achievements at Toledo came in 1980 when he won the MAC tournament at 142 pounds. He also competed in the NCAA championships. 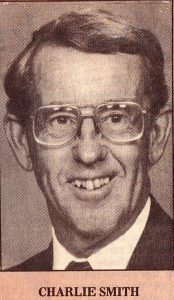 n to golf as a player, teacher, program organizer and course builder. Even at the age of 62, Smith continued to be a player of note as a senior in the Northern Ohio PGA and a teacher at Silver Tee in Westlake. Most of his achievements came as the head pro at Spring Valley Country Club and as a pro/owner at Forest Hills – both in Elyria. Smith was a native of Olean, N.Y., and through high school his major sport was basketball. He was a three-year letterman in high school and captain for two years. He became a pro shop worker at a country club in Olean that launched his golfing career. After becoming a pro, he took the assistant pro’s post at The Inverness Club in Toledo. He spent two years in the service, managing the Officer’s Club at Fort Hood in Texas, then returned to Inverness in 1952, staying until 1959. He came to Spring Valley after that, stayed for six years before buying into Forest Hills in 1965. An excellent teacher, Smith organized many programs for junior golfers. In 1968, he expanded Forest Hills to 18 holes and sold his interest in the club in 1975. Smith has long been recognized as one of the top players ever in this area. He holds numerous senior titles and is a former Northern Ohio PGA Seniors Champion. Twice he qualified for the U.S. Open and participated in the PGA and Cleveland Open as well. He has been a top 10 qualifier in the Ohio Open.

When you mention outstanding athletes from Elyria Catholic, one name immediately come 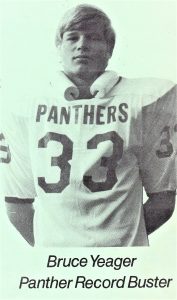 s to mind – Bruce Yeager. A 1973 graduate of EC and a letterwinner in football, basketball and track, his awards were numerous and prestigious. His football ability placed him on the High School All-America team. He was selected to play in the Ohio North-South game and he was selected to participate in the Pennsylvania “Big 33” All-Star game. He was awarded the Lorain County Golden Helmet award that goes annually to the outstanding senior player in Lorain County. Yeager was the first EC back to rush for more than 1,000 yards in a season and he accomplished that feat twice. At one time, Yeager held the Lorain County all-time career rushing record. He was outstanding on both sides of the ball in 1972, rushing for 1,546 yards in leading the Panthers to a 7-3 mark. He averaged 7.0 yards per carry and rushed 222 times. As a junior, he gained 1,093 yards on 155 attempts (7.1 average). He was named second team All-Ohio. During his three-year career, Yeager topped the 100-yard mark 15 times and finished with 3,128 yards on the ground. In addition, Yeager averaged 38.7 yards per punt and scored 224 points – both school records at the time. He was named the Most Valuable Player on the track team in 1973 – tossing the discus a record 150-feet, eight inches. Upon graduation, Yeager went on to Georgia Tech where he played fullback and halfback until late in his junior season when he was switched to tight end. His blocking was his forte in Tech’s wishbone attack. He was a true ‘Student-Athlete” as he made the dean’s list as an industrial management major. 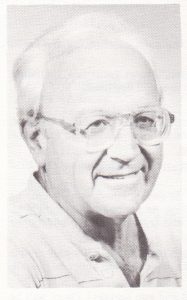 very challenging one for area high schools. In 1977, he started the Elyria Distance Classic — later called the Applethon — as a joint venture with the city of Elyria and the Elyria Sports Hall of Fame.

Wilhelm received the first of what is now an annual award by the Elyria Sports Hall of Fame. Wilhelm graduated from Amherst in 1940 and served three years in the Army during World War II before taking up coaching, first at Amherst and then South Amherst. In 1965, Wilhelm took over as track coach at the newly-opened Lorain County Community College. While at LCCC, he trained ESHOF’s Jackie Below when she won two National sprint championships. He remained active locally in the Distance Classic, the Decathlon and the Hall of Fame r