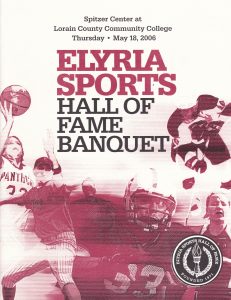 A 1970 graduate of Elyria Catholic, Tony D’Orazio’s biggest claim to fame came after he finished his career as quarterback and defensive back for the Panthers and a three-year letterman and captain at Ohio Northern. Tony played for the Cleveland Falcons – a minor league professional football team – for 10 years and was enshrined in the Minor Professional Hall of Fame in 1992. D’Orazio led the Falcons to 10 division titles, six league crowns, and five state championships as quarterback. He was a nine-time all-star winning 102 games during his career that included three undefeated seasons and the league MVP in 1983.

Jim Guest, a 1959 Elyria High graduate, teamed with Larry Stark to bring home the Pioneers first state championship – a tennis doubles crown under the direction of Hall of Fame coach Jim Rakestraw. Guest had teamed with Paul Walker to finish runner-up in doubles in 1958 after a spectacular singles career for the Pioneers. As a senior, Guest lost just one match – finishing 13-1 and helped Elyria win the Buckeye Conference tennis title two times. At Fisk University in Memphis, Tennessee, Guest not only won two conference singles crowns but two doubles championships as well. He has retired as a lawyer and was chairman of the American Sickle Cell Anemia Association of Cleveland. Guest passed away in June, 2020.

Bob Leshnak, a 1984 graduate of Elyria Catholic, was All-Ohio for the state champion Panthers of 1983. Leshnak, the Lombardi Trophy winner signifying the counties outstanding lineman, played on both sides of the ball and was the Erie Coast Conference Defensive MVP. He also participated in wrestling and baseball for the Panthers – winning a conference championship on the mats and was named the MVP of the league in baseball. Leshnak went on to become a four-year starter for the University of Cincinnati and was the Bearcats captain his senior year.

Wilbur Lewis, a 1967 Elyria High grad, was just about perfect as a wrestler for the

Pioneers. He was undefeated and state champion at 138 pounds as a senior and finished third in the state as a junior, losing his only match to the eventual state champion at 133 pounds. In his junior and senior years, Lewis compiled an amazing 56-1 record under Coach Bill Pierson. Elyria, with Lewis and teammate Lanny Bush winning state titles, finished third in the state in 1967. Lewis was a two-time Buckeye Conference champion and placed third at the National Junior College Championships for Lorain County Community College in 1968. Lewis enlisted in the Air Force where he won a number of wrestling championships and is a retired Master Sergeant after a distinquished military career. He attended and started the wrestling program at McKendree College in Bellville, Illinois.

Kevin Ziegman, an Elyria Catholic grad in 1980, not only was named All-Ohio his senior year when he rushed for 1,508 yards and scored 12 touchdowns for the Panthers, but was also All-Ohio as a junior – rushing for 1,242 yards and scoring 17 TDs. He was named to the Catholic High School All-American team his senior year. While at EC, Ziegman also participated in basketball and track all four years. He earned a scholarship to Miami of Ohio where he played football all four years for the Redskins – as they were known in those days. Ziegman, now a professional photographer, graciously volunteers to take pictures each year at the Elyria Sports Hall of Fame Banquet. 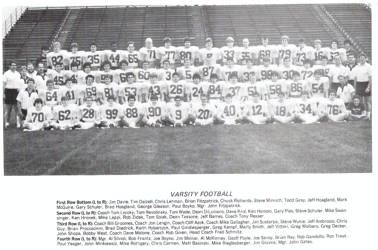 Fred Schmitz took over as head coach from Jim Rattay for the 1984 season after Elyria Catholic had swept through the 1983 season as state champions. Once again the Panthers roared through the regular season undefeated and managed to get past both Lima Bath, 7-6, and Orrville, 14-13, in the playoffs before crushing Cincinnati McNicholas, 45-20, for the Division III state title. EC completed the season a perfect 13-0 to extend the school’s unbeaten string to 26 games. The Panthers outscored their opponents, 553-84 for the year with five shutouts. Four EC players were named to the All-Ohio team with Al McKinney named as the Back of the Year and Geoff Poyle the Lineman of the Year – unprecedented for Lorain County schools. In addition, Ron Traut made first team as a defensive back and Joe Savoy as a defensive tackle. Placekicker Jim Molnar was named to the second team and Paul Yeager was special mention. McKinney was Lorain County’s Golden Helmet winner while Poyle won the Lombardi Award. 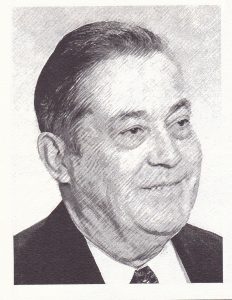 Hal Minnich, a 1953 Elyria Catholic grad, has served on the EC Dad’s booster club as treasurer for over 40 years, raising over a million dollars for the school athletic programs through a monthly raffle that he helped organize before the school even opened. Minnich, a well-known barber in the city, received the EC “Distinguished Alumni Award” in 1993 and as been a fixture for promoting Elyria Catholic his entire adult life.