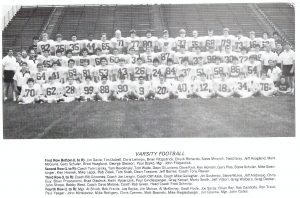 When Jim Rattay resigned as Elyria Catholic’s football coach in the spring of 1984 to take a similar position at Euclid High School, many thought the possibility of a second Class AA state championship went with him.

However, Rattay’s right-hand man, Fred Schmitz, took over as head coach and kept the Panthers on course. Once again Elyria Catholic roared through the regular season undefeated and managed to get past both Lima Bath, 7-6, and Orrville, 14-13, in the playoffs before crushing Cincinnati McNicholas, 45-20, for the Division III state title.

EC completed the season a perfect 13-0 to extend the school’s unbeaten string to 26 games. The Panthers outscored their opponents, 553-84 for the year with five shutouts.
Four EC players were named to the All-Ohio team with Al McKinney named as Ohio’s Back-of-the-Year and Geoff Poyle the Lineman of the Year – unprecedented for Lorain County schools.  In addition, Ron Traut made first team as a defensive back and Joe Savoy as a defensive tackle. Placekicker Jim Molnar was named to the second team and Paul Yeager was spe 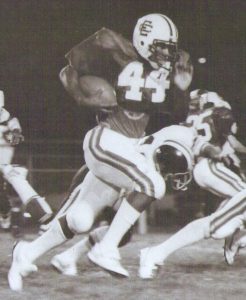