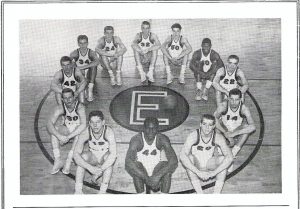 Legendary coach Dale Reichenbach built Elyria High into a basketball hotbed in the late 1950s and 1960s. Over the course of 10 years from 1957 through 1966, Elyria won the big school district championship nine times – including an unprecedented eight straight but it was the 1961 team that came closest to taking all the marbles. The Pioneers hadn’t even won their own league as they finished second behind Sandusky.

However, led by Elyria’s first All-Ohio basketball player – Lee Johnson – the Pioneers (20-6) caught fire late in the year – beating Clearview, 84-31, Elyria Catholic, 54-20, and Lorain, 65-35, in sectional tournament play. The Pioneers then avenged one of their regular season losses by 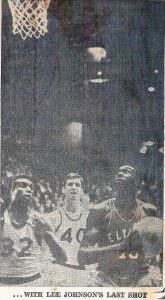 defeating Lakewood, 52-49, in the District semi-finals at Baldwin-Wallace before eliminating highly-favored West Tech, 56-47, to qualify for the Toledo Regional.

In the semi-final at Toledo against Lima Senior, Johnson (shown at right against Portsmouth)  hit one of his patented turn-around jump shots to win the game, 44-42, in sudden death overtime – the final sudden death game ever played in the state of Ohio. The Pioneers drilled Toledo Libbey, 68-51, the next night to qualify EHS for it’s first-ever appearance in the state tournament.

Elyria lost the semi-final game, 54-52, to eventual state champion Portsmouth. Johnson (409 points), Rick Coven (330) and Ken Dick (276) were the high scorers on the team. Jim Garbash (236 points), Steve Hays, Bill Jackson and Dick Roberts were other major contributors to the success of the team. Johnson was said to be Reichenbach’s pet project from his freshman year on – turning him into a great scorer and rebounder. Garbash, ironically, hadn’t played varsity basketball all through high school until he was invited to try out for the team for his senior season. The year 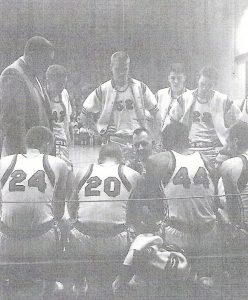 before, Reichenbach suggested he play in the local YMCA league to hone his skills to become the point guard on the state-bound team. That’s Coach Reichenbach instructing the 1961 team during the tournament at B-W.

In 1961, Elyria made its first state tournament appearance since 1936 when it was a 16-team tournament. Also of note, Lee Johnson’s basket in sudden death to beat Lima at the Toledo Regional, was the last time the sudden death rule came into play. The following year, the overtime sessions were not decided by sudden death.