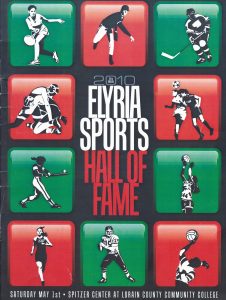 Catholic’s defense was as good as anyone’s in 1981 – allowing just 33 points during the regular season with four shutouts. At the middle of that defense – literally – was middle guard Barry Diedrick, an All-Ohio selection and Northeast Ohio District lineman of the year.  Diedrick, at 5-foot-11, 188 pounds, led the Panthers to their fourth straight Erie Coast Conference title and an unbeaten but twice tied regular season. EC qualified for the playoffs and defeated Bellevue, 7-6, in the first round before losing to in the state semi-finals to Akron St. Vincent-St. Mary. Diedrick was selected as Lorain County’s AA-A defensive Player-of-the-Year.

County’s only three-time Pentathlon champion, Amy Filiaggi was no doubt one of the finest all-around women athletes ever to represent Elyria High. Filiaggi was outstanding in both volleyball and track for the Pioneers. She earned a scholarship to Kent State where she earned four letters in volleyball. As a senior, she was the only player to be ranked in the top 10 in seven different categories. At Elyria, Filiaggi earned seven letters – four in track – where she set the school record in the high jump at 5-foot-8.  During her three years on the volleyball team at EHS, the Pioneers won 74 games and lost only six. The 1990 team finished the regular season unbeaten and ranked as the top team in the state by the Ohio High School Volleyball Coaches Association.

a High’s wrestling program marked its 50th season recently – the first program established in the county.  It didn’t take long for the first of many state champions to be crowned when Walter Keith, a chiseled 154-pounder, rolled through the state tournament in 1963 as a junior.  A year later, Keith was denied a second title only by referee’s decision. Keith went on to wrestle at Lorain County Community College. He passed away in 2019.

ers. Among those was its quarterback – Keith Rybarczyk. Rybarczyk was a rare four-sport athlete for the Panthers – football, basketball, baseball and track. In fact, Rybarczyk performed at the state track meet and state baseball tournament on the same day – running a leg of the 4 X 100 relay and playing third base for EC the same day. It was Rybarczyk’s two-run home run that propelled the Panthers to the regional title against unbeaten Poland at Barberton. Rybarczyk threw for over 1,000 yards as a junior and completed 55 percent of his passes as a senior. At Mount Union, Rybarczyk earned Division III All-American honors as a quarterback for the Purple Raiders.

be a National Champion is pretty special. Elyria West’s Rob Woolbright experienced that special feeling four times in two events while running track at Lincoln University, located in the southeast corner of Pennsylvania. In 1997, Woolbright anchored the Lion’s 4 X 400 meter relay team to an indoor national championship with a time of 3:16.58 and he duplicated that feat in both the 1997 and 1998 outdoor national championships with a time of 3:13.74 in ‘97 and 3:11.59 in ‘98. Individually, Woolbright won the 1998 national indoor 440 meter dash with a time of 49.03. While at West, Woolbright was a part of a couple of school records in the 4 X 200 relay (1:33.1) and 4 X 100 relay (43.1). He also was a starter on West’s last basketball team that advanced to the district semifinal and finished with a record of 18-4. The Wolverines won the Lorain County Conference title in both basketball and track. 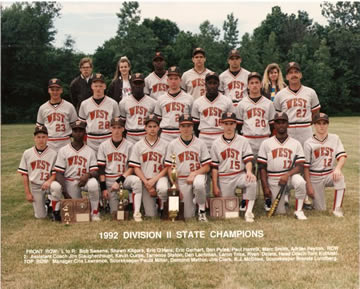 The city of Elyria was well represented at the 1992 state baseball tournament. Both Elyria West and Elyria High won regional championships in Division II and Division I respectively but it was the Wolverines that brought home the title from Thurman Munson Stadium in Canton behind the outstanding pitching of senior right-hander Damon Mathis (5-0) and junior lefthander Tarrance Staton (4-2). It was the first state baseball championship for a Lorain Co

tanding head and assistant coach at both Elyria High and North Ridgeville, Jack Schumacher was also instrumental in the organization of a number of recreational sport activities in the city of Elyria – softball, touch football, baseball, and volleyball along with youth programs. In 16 years at Elyria High, Schumacher was a part of a number of championship coaching staffs at Elyria including football, basketball, baseball and golf and his summer Merchants baseball team won back-to-back Cuyahoga County League titles in 1979 and 1980.