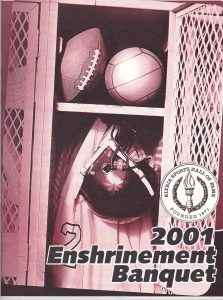 At 18 months of age, Kevin Higgins was involved in an accident that cost him sight in his left eye

. So much for a sports career – right? Wrong! Higgins not only played but excelled in varsity football and wrestling at the high school level and went on to become one of the finest collegiate wrestlers ever to come out of Lorain County. He later coached a state champion wrestling tea 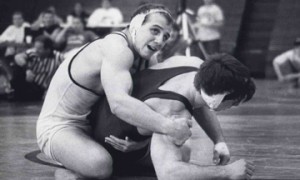 m in the state of Georgia. From humble beginnings as a freshman wrestler at Elyria High, finishing with a 9-7-2 record, Higgins went on to a 19-1 record as a sophomore, 10-6 as a junior and 29-6 as a senior. Higgins handed 145-pound state champion Mark Buddie of St. Ignatius his only loss. On the Pioneer football team, Higgins was an All-Buckeye Conference center in 1984. Higgins went on to Baldwin-Wallace (pictured at right) where he was 1989 National Division III champion and was named the Yellow Jackets outstanding wrestler all four years – the first and only wrestler to do so. At B-W, Higgins won 100 matches, eight tournaments and placed in nine others. At one point he won 20 straight matches. His college winning percentage was .785 with 23 pins. At Sequoyah High School in Canton, Georgia, Higgins became the head coach in 1994 (co-coaching with Bob Eddy from 1994-98). His teams were county champions in 1995, 96, 97 and 99 when he was also named County Coach of the Year. His teams were regional champions in 1996, 98, 99, and 2001 and were state AAAA champions in 1996 and 99. In 1999, Higgins was selected NWCA Georgia Coach of the Year. He has coached eight individual state champions and 26 state placers.

Brett Larrick wasn’t born with a basketball in his hands, it just seemed that way. Larrick rewrote

Elyria High’s record book during his career and went on to make quite a name for himself at Charleston Southern University as well. At Elyria High, Larrick holds nearly all the school’s scoring marks – 43 points in a single game, 551 in a season, 1,351 for his career. He also holds the best two free throw shooting percentage figures – hitting a lofty 90.1 percent of his foul shots his junior year (110 of 122) and 89.5 percent as a senior (94 of 105).

His 27 straight free throws ranks second behind fellow ESHOF’s Mike Fischer (32 in a row). Larrick was named All-Ohio and Lorain County’s Mr. Basketball his senior year as well as being named a nominee to the prestigious McDonald’s All-American  team. On top of all that, Larrick also was an ace student with a 4.2 GPA. At Charleston Southern, Larrick led the Big South Conference in scoring and was named to both the All-Big South first team and All-Academic team. He was named the top male athlete at the university. In his final game in the NCAA tournament against UCLA, Larrick had 32 points, six rebounds, six assists, and threw in 6 3-pointers. He made the Dean’s list all four years. Larrick was inducted into Charleston Southern’s Hall of Fame in October, 2004. As of 2013, Larrick’s 1,738 points ranked third in school history as does his 604 total field goals. He ranks 2nd all-time in 3-pointers with 234 and his free throw percentage of .789 ranks among the best in school history. After a professional stint in Europe, Larrick returned to his home town. He was an assistant to Mike Walsh for the EHS girls teams for several years and after assisting Bob Walsh with the boys varsity for three years, became Elyria High’s head coach for the 2008-09 season.

sn’t a challenge too big for Mark “Torry” McGuire. Small in physical presence but huge in stature, McGuire began his high school athletic career as a 98-pound wrestler at 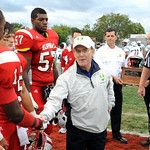 Elyria Catholic. He finished with a 55-11-1 record. By the time he graduated, McGuire became the first EC wrestler to place at the state tournament and went on to earn three letters at the University of Toledo. McGuire returned to his hometown and became the head wrestling coach at EC from 1977 to 1986, compiling a 72-32-2 dual mark for the Panthers, winning 10 team tournament championships along the way. In 1984 his Panthers won the district title and were 2nd at the 1986 regionals. He was North Central Conference coach of the year in 1978 and Lorain County Coach of the Year in 1981, 84 and 86. McGuire was on a committee that founded the Lorain County Wrestling Coaches and Officials Association (LCWCOA) and served in various capacities including President, Vice-President, Secretary and Treasurer. He was inducted into the LCWCOA Hall of Fame in 1995. McGuire was instrumental in EC’s football success as well. He was head freshman coach for 14 years, compiling a 79-20-1 record with four undefeated seasons. He also assisted at the varsity level for many years. In 1986, McGuire became the Athletic Director at Elyria Catholic and brought the district wrestling tournament to the Coliseum. In the fall of 1997, McGuire became the Elyria Schools Athletic Director – becoming the first person to be AD at both schools. He has helped keep the Division I and IV baseball tournaments at George Day Field and helped organize the successful Lorain County Holiday Classic basketball tournament as well as the Elyria Softball Classic. He was named Lorain County’s Athletic Director of the year in 1997. He has since moved on to become the Athletic Director at Solon and has retired as of the end of the 2019 school year.

Little did anyone know when John Mihalik won the local punt, pass and kick competition at th

e tender age of 9, what it could lead to. Mihalik went on to an outstanding high school career at Elyria Catholic and was a 3-year letterman at Boston College. At EC, Mihalik excelled in football, basketball and baseball. He led the area in scoring for the 1981 season with 132 points on 22 touchdowns. He rushed for 1,115 yards to keep the great tradition of wearing number 44 at Elyria Catholic. He had six games where he gained at least 100 yards. Mihalik was all-conference, all-county, all-district and a nominee for the Golden Helmet. The Panthers finished the regular season 8-0-2 and qualified for the state play-offs. EC won the regional title by beating Bellevue, 7-6, but lost to Akron St. Vincent-St. Mary in the state semifinals. In basketball, Mihalik was EC’s MVP and was named all-conference and all-county. He led the Panthers with a 14.8-point average. In baseball, he was a three-year letterman. At BC, Mihalik participated in the 1982 Tangerine Bowl, the 1983 Liberty Bowl, and the 1985 Cotton Bowl. He was the team’s punter as a freshman, averaging 38.9 yards per kick.

Name the sport and Becky Paukst probably excelled but she made her biggest mark as a softball and volleyball player at Elyria West High School before winning three letters at Ohio University in softball. Paukst was an all-star in baseball, softball and

volleyball, a champion tennis player, a record-setting track star, and placed third in a state-wide basketball shooting competition. At both 11- and 12-years of age, Paukst made baseball little league all-stars, leading off and playing centerfield on both squads – the only female to be voted a member of the all-star team. At Elyria West, Paukst was a 4-year letterman in volleyball and softball and was named the Ms. Volleyball winner in 1993. She was honorable mention All-Ohio, first team all-conference and all-county, all-district three years and conference player-of-the-year twice. She holds the distinction of being the first freshman in the 20-year history of Elyria West to play and start on the varsity team. She holds game (18), season (156) and career (419) records for digs at EWHS as well as holding the record for saves in a career (117). In softball, Paukst was first team all-county four times, first team all-conference three, and first team all-district once. She was All-Ohio honorable mention in 1994 as she led the team in batting with a .594 mark. She participated on numerous champion summer softball teams. In 1994, Paukst was a member of the Ashland Blaze – the National Softball Association World Series Champions. She was voted first team All-Nation at the NSA National Softball Tournament in Chattanooga, Tennessee. While at West, Paukst was the George Day Award winner – given to the outstanding senior athlete at West. At OU, Paukst was a member of the 1995 Mid-American Champions – one of just three starting freshmen for the Bobcats. In 1997, Paukst was named Ohio U’s defensive player of the year and was a first team selection to the All-MAC team. In 1998, Paukst was selected to play with other top collegians against the European National Team. 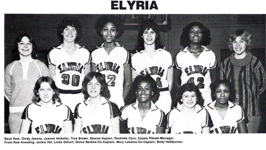 al four by defeating Ashland, 50-46, at the Sandusky Regional. They truly were ‘Pioneers’ by becoming the first Lorain County girls team to compete at the state finals. The Pioneers won 23 games, lost only twice in earning the Buckeye Conference championship as well as Sectional, District and Regional titles. The team helped set a record for consecutive regular season wins when they defeated Admiral King, 51-43. They also set the mark for most points in a single game when the

y rolled over Vermilion, 88-17. They lost to eventual state champion Akron St. Vincent-St. Mary in the state semi-finals. Gloria Barbee was named the MVP for the team – averaging 13.6 points a game and five rebounds. She had 61 steals, 35 assists and led the team in scoring with 288 points. Mary Lakotas was the team’s best defensive player. Lakota led the team in steals with 115 and contributed 61 assists. Barbee and Lakotas were the team captains. Tina Brown led the rebounding (10.1 rebounds per game) and averaged 6.1 points. Rochelle Corn pulled down five rebounds and scored 9.3 points a contest. Sharon Kaplan led the way at the foul line – sinking 69 per cent of her free throws. Other squad members included Betty Halliburton, the Jaycee Sportsmanship winner, Lisa Harris, Joanne Hinkofer, Linda Dehart, Cindy Janasy and Jackie Hill. Cassie Pileski was the team manager.