Any talk of Elyria High’s football legacy begins with the legendary undefeated 1947 team led by the incomparable Vic Janowicz. Elyria swept through its nine game schedule unscathed – finishing with a 7-6 victory over its bitter archrival Lorain and won the Lake Erie League Championship. Elyria finished the season ranked second in the state behind Barberton for the mythical state title. There was no playoff format in that era.
Janowicz, later the Heisman Trophy recipient at Ohio State, rushed for 1,032 yards in 138 carries – an amazing 7.5 yards per carry average. He led the Lake Erie League with 101 points. He scored 14 touchdowns and kicked 17 extra points. Janowicz and teammates Howard Schuster, Ralph Moyer, Jim Lear, Ollie Glass, and Tony Curcillo were all named to the All-LEL team. Janowicz was named All-Ohio for the second straight season.
Elyria’s most one-sided victory was a 39-7 pounding of then state-ranked Fremont. The team was coached by Hall-of-Famer Dwight ‘Ike’ Truby. Elyria opened the season with a 19-12 victory over Toledo DeVilbiss and followed that up with a pair of shut-outs – 40-0 against Sandusky and 27-0 against Shaker. It then defeated Lakewood, 18-7, (See the program from that game below) and Youngstown South, 27-19 before getting past LEL rivals Cleveland Heights, 20-12, and Shaw, 13-6, to set up the Fremont and Lorain games to close out the year. Elyria outscored its opponents 210-69 and arbitrarily lost out on winning the mythical state championship to Barberton in a vote of state-wide sportswriters. 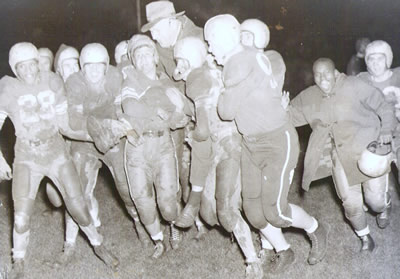 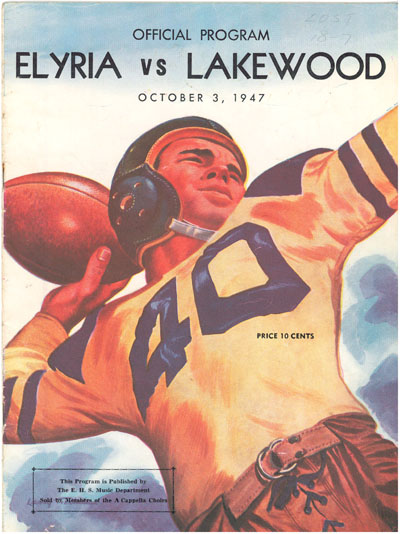 Click on the Cover to see the entire program