The Pioneers, coached by 1973 ESHOF inductee Bill Barton (shown being carried off after the final game), rolled through the ‘71 season unscathed piling up 336 points and allowing just 44 – none in the fourth quarter and only six points total in the second half. Lorain’s veteran coach Doug Thompson called the ’71 Pioneers the best area football team he’d ever seen after Elyria had beaten his Steelmen, 41-0, to put the wraps on its third undefeated season in four years. Elyria was rated as the second best team in the state in an era prior to the present play-off format. Les Miles, currently the head coach at LSU, was a member and All-Ohio lineman for the Pioneers in 1971. Ike Maxwell was the offensive star – rushing for 1870 yards and 27 touchdowns. The team racked up more rushing yardage (3059) and gave up less (1234) than any other team in school history to that point. Remarkably, the team only lost eight fumbles and had only five passes intercepted. On defense, 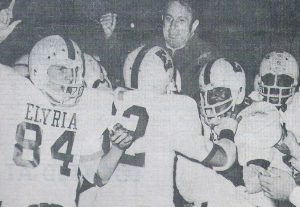 it picked off 20 passes and recovered nine fumbles. The team beat Toledo Scott, 35-7, to open the season and West Tech, 41-0, and East Tech, 31-0, in non-conference play. The Pioneers opened Buckeye Conference play by beating Marion Harding, 55-6, before routing Admiral King, 54-12. In its three toughest games of the year, Elyria defeated Fremont Ross, 15-7, Sandusky, 19-6, and Findlay, 6-0, back-to-back before finishing the perfect season with huge wins over Mansfield, 39-6, and Lorain 41-0. There were no post-season playoffs at that time so the Pioneers had to settle for the Wire Service Polls to determine the state champion. Elyria was rated second in both the Associated 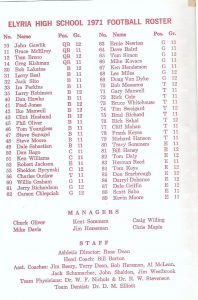