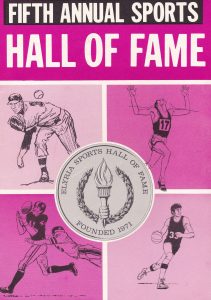 It seemed most appropriate that Elyria’s lone Olympic performer would be selected to enter Elyria’s Hall of Fame in 1976 – the Bicentennial celebration for the United States.

“Phin”, as he was known in his day, was a hurdler extraordinaire at both Elyria High and Ohio State. He died of a heart attack in 1972 leaving behind a legacy that included a performance in the 1924 Olympics. Guthrie was a 20-year old collegian when he competed at the Paris Olympics. He won his preliminary heat to qualify for the 110-meter high hurdles. In the finals he finished third behind USA teammate Dan Kinsey (from Oberlin)and Sidney Atkinson of South Africa but was placed sixth for knocking over three hurdles — still good for an Olympic diploma. Guthrie was one of the top hurdlers in the country during the mid-1920s. In 1925, he tied the then world record of 14.4 in the high hurdles and also set an indoor 40-yard hurdle mark of 5.4. He captained the Buckeyes track team that year and won the Big Ten hurdles championship. He would have liked to have tried out again in 1928 but financial responsibilities forced him to seek work and prevented him from training properly. Guthrie won one NCAA outdoor high hurdles, and finished second in another. He won a national AAU indoor hurdle race and another outdoors, and scored in three other national hurdle races. He won four Big Ten titles and set eight Ohio college outdoor and two indoor records. He was inducted into the Ohio Track and Field Hall of Fame in 1981.

It was the 1940 Blue-Gray Classic game in Montgomery, Alabama where the North recorded 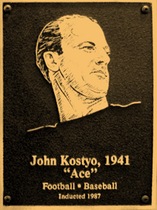 a 14-12 victory. The difference? Two extra points by a small, 165-pound kid from Elyria named John Kostyo. Kostyo, known as the ace, competed from Wittenberg University. “I held my 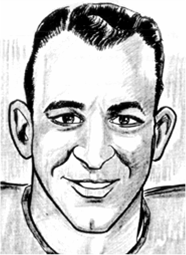 own,” Kostyo said. “I played halfback on defense and intercepted a pass.” There were players from Notre Dame, Michigan and Illinois on that team but Kostyo was right there with them. At Elyria, Kostyo played two seasons of varsity football and finished 8-1-1 his senior year. He earned All-Lake Erie League honors. He accepted a scholarship to Wittenberg and started his junior and senior years. He was the high scorer for small schools in the state of Ohio. He was the team’s MVP and was named to the UPI All-Ohio and All-Ohio Conference teams. Kostyo passed away in 2001.

Like any other kid in his era, Eugene Myers was up by 9 a.m. and down to the ballpark. Back home fo 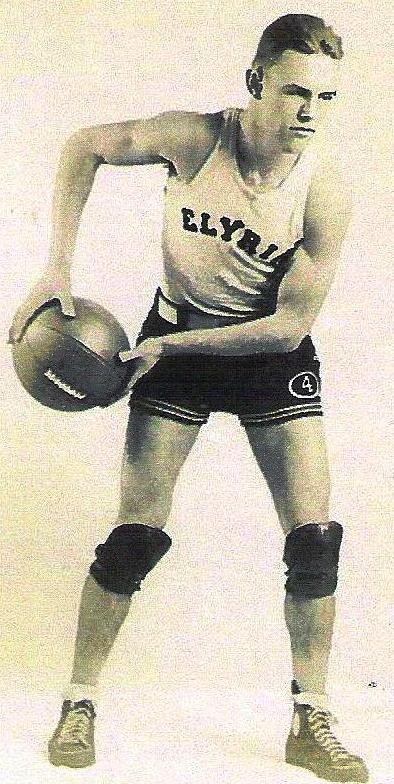 r a quick lunch and then back to the ballpark. Home for supper and back down to the ballpark until dark. Myers was no different from any other kid except for his ability. Myers’ best sport was baseball even though Elyria High did not field a team for three of the four years Myers attended. He played football and basketball as well for EHS and fondly remembered the 1932 Lorain game played on Thanksgiving morning. Fred Lehman, Elyria’s star player, was injured and couldn’t play quarterback so Myers got the call to start – his first heavyweight start in his high school days. (It was an era when many schools fielded two football teams – one lightweight, one heavyweight.) Elyria won the game, 26-0. “We had Frank Mrukowski, Bill Jones, and Fred Carlton in the backfield,” Myers said. “We really took it to them.” When it came to choosing a college, his neighborhood buddy – Alex Clowson – paved the way. Myers played football and basketball at Ohio State as a freshman but concentrated on baseball after that. He played second base for the Buckeyes and is only one of 13 players to be named captain for two consecutive years (1937 and 38). He signed a contract with the White Sox in the spring of 1940. He competed in many very good leagues in the area and later competed in softball. One area sports writer rated him ‘the best defensive infielder’ in the Tri-County League. Myers passed away on January 26, 2011, at age 95. This picture from his basketball days at Elyria High was provided by his family. 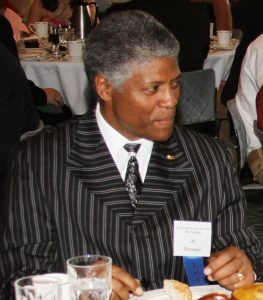 that he’d regret his decision to attend Northwestern rather than OSU. Four years later in 1971, Robinson (below, left) led his Wildcat teammates to a 14-10 victory at the Horseshoe – the last time Northwestern would beat Ohio State at Ohio State. At the time of his induction into the E

lyria Sports Hall of Fame, Robinson was the youngest so honored. Robinson was a standout in both football and track at Elyria High. One of Robinson’s cherished moments came while he and coach Bill Barton were looking at film of the 1967 game against Marion Harding. Robinson had gained 140 yards that night but Barton kept rolling one play over and over. “As we were watching the films of the game, I remember running over two defensive players and ran for a 40-yard touchdown. I knew he had coached athletes like Jack Beidleman and Houston Love but he said ‘that’s one of the best plays I’ve ever seen.’ For him to say that was better than the event.” Robinson once raced 95 yards for a score against Fremont and it remains one of the longest in school history. He was a great long jumper and hurdler for the track team – setting marks for both the school and district. He competed in the state meet his senior year – finishing fourth in the long jump with a leap of 22 feet, 8 ¾ inches. He won the 1968 Lorain County Decathlon. As a freshman, he remembers Love, a senior, showing him the proper long jump technique. At Northwestern, he participated in both football and track his freshman year but concentrated on football after that. At the time he graduated, Robinson was 4th all-time on the Northwestern rushing charts – gaining 1,526 yards. Dr. Robinson has since moved back to Elyria and has opened his practice as a doctor.

a teacher and coach at EHS. His coaching career spanned 29 years and four sports. He taught math full time until his retirement in 1957. He remained a substitute teacher until 1970. He first came to Elyria in 1918 as a math teacher and athletic director. He coached football for six years, basketball for three, eight years as swimming coach and 25 as the track coach. His fondest memory was the 9-0 victory over Lorain in 1918 in his first year. He gradually paired his coaching duties and stepped down as athletic director in 1923. He had the privilege of coaching such Hall of Famers as George Phineas Guthrie, Vic Janowicz and Joe Scott during his career. Vaughn passed away in 1981.