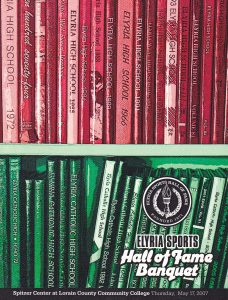 yria High is recognized as one of the premier softball programs in the state of Ohio thanks in part to the foundation built during the early 1990s. Certainly, Ashley Anderson-Petit was one of the key players that built that solid foundation of Softball excellence. Anderson, a 1993 EHS grad, was the Pioneers first Miss Softball of Lorain County in leading the Elyria to two straight district championships in 1992 and 1993 under Coach Sue Cohagen. Anderson was the premier pitcher in the area in leading Elyria to a back-to-back 20 win seasons in 1992 and 1993. Anderson fashioned an 18-3 record her senior season. At Elyria High, Anderson not only excelled as a softball pitcher, but made her presence felt in both volleyball and basketball. In volleyball, Anderson was named second team All-Ohio in 1992 and was second team all-county in basketball. Before competing as a senior at Wright State, she was named to the American Softball Association All-Ameican first-team in the summer of 1996. She earned a full scholarship to Wright State where she was a four-year starter, an all-conference selection, the Raider Award winner and a two-year captain. More recently, she participated in the Columbus Marathon, the Outer Limits Triathlon and finished second at the 26th annual Twin Sizzler 28-mile bicycle race in 2001.

A 1981 graduate of Elyria Catholic, Donna Donath-Garriques dominated the local tennis scene in

Lorain County from the late 1970s through the decade of the 1980s – winning her first Women’s Singles Championship at the age of 14. Twenty-two times, Donath was crowned champion in various categories in Elyria city play – winning the women’s singles title a record six years in a row (1977-1982). She also won four consecutive mixed doubles crowns from 1979 through 1982. In county play, Donath won four women’s singles titles and eight girls’ singles titles – both county records. She was undefeated in dual match play at Elyria Catholic and placed fourth in state doubles with partner Eleni Segos in 1978 and third in doubles in 1979. She was awarded a full scholarship to Kent State in 1981 but when Kent dropped women’s tennis a year later, Donath transferred to Stetson on a full scholarship where she was ranked 6th nationally in D-II doubles with partner Sharon Swanberry. In Northeastern Ohio, she was ranked 2nd in 1977 for singles and was a member of the Northeastern Ohio Wightman Cup Team in 1981 and 1982. In addition to her city and county championships, Donath won 17 other crowns in various tournaments.

the Majors Division state championship in 1958 – the first state title in any sport for the city at that time. He was the winning pitcher for the state title game. Lengel enjoyed a four-year career at Elyria High and earned a baseball scholarship to Miami of Ohio where he lettered for the Redskins – as they were known at that time. Locally, Lengel participated in the Pony League and played under Bob Rieth on the American Legion Post 12 baseball team four years. As a sophomore for the Pioneers, Lengel tossed a no-hitter and struck out nine batters against Marion to clinch the Buckeye Conference championship. In Pony League play, Lengel threw a perfect game in July of 1960. He also had a number of one-hitters and numerous shutouts, striking out 10 or more hitters on a number of occasions. In addition to baseball, Lengel was a key player on Elyria’s Cinderella basketball team in 1964 that surprised unbeaten and state-ranked Cleveland Rhodes for the district championship on their way to a final-four appearance in Columbus. Lengel is a retired school teacher from the Midview district. This year, he joins his older brother Steve, a 1994 inductee, as members of the Elyria Sports Hall of Fame.

Catholic has built a well-respected wrestling program and Jim Reighley certainly helped build that tradition by bringing home EC’s first-ever individual state championship of any kind at 167 pounds in 1976. Reighley, a ‘76 EC grad, won 76 matches for the Panthers and was 58-2 combined over his junior and senior years and finished with a four-year career mark of 76-21-1. As a sophomore, Reighley finished fourth at the state tournament at 155 pounds. For his EC career, he recorded 32 pins and won two North Central Conference championships. He was Elyria Catholic’s Most Valuable Wrestler in 1976 under Coach Dan Hornbeek. On the football field, Reighley was a three-year letterman for the Panthers and was an all-conference lineman in 1975. As a senior, he won the Jaycees Sportsmanship award. He attended Ball State on a wrestling scholarship and competed as a freshman but transferred to Ohio State a year later where he graduated in 1981.

A 1982 Elyria High graduate, Andy Volney excelled on both the baseball and football fields for the

Pioneers. As a second baseman under Coach Chuck Ziemke, Volney batted .453 and was selected All-Ohio in 1982, earning him a scholarship to Kent State. He was a 3-year starter on the Pioneer baseball team and led Elyria (21-4) to the Buckeye Conference championship and district finals in 1982. During veteran American Legion coach and fellow ESHOF’s Bob Reith’s final season, the versatile Volney was pressed into playing every position on the field but catcher and pitcher and led the team in hitting (.406), runs scored, hits, doubles, home runs and RBIs. He was selected to play in the annual American Legion All-Star game at Ashland College. In football, Volney was named to the second team All-Ohio as a punter and defensive back his senior year. He averaged 35 yards a punt and intercepted nine passes during his senior season including three in a 31-7 romp over North Ridgeville and two more in a 7-0 victory over Toledo Macomber. He also returned a fumble for a score against Fremont Ross. Volney won three letters under Coach Terry Doan. He was named to the first team in the Buckeye Conference for both sports and won Elyria’s prestigious George Day Award in 1982 as well as being a National Honor Society member.

Legendary coach Dale Reichenbach built Elyria High into a basketball hotbed in the late 1950s and 1960s. Over the course of 10 years from 1957 throug 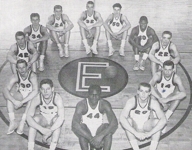 h 1966, Elyria won the big school district championship nine times – including an unprecedented eight straight but it was the 1961 team that came closest to taking all the marbles. Led by Elyria’s first All-Ohio basketball player – Lee Johnson – the Pioneers (20-6) caught fire late in the year – beating Clearview, 84-31, Elyria Catholic, 54-20, and Lorain, 65-35, in sectional tourna 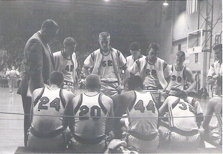 ment play. The Pioneers then avenged one of their regular season losses by defeating Lakewood, 52-49, in the District semi-finals at Baldwin-Wallace before eliminating highly-favored West Tech, 56-47, to qualify for the Toledo Regional (see picture at right). In the semi-final at Toledo against Lima Senior, Johnson hit one of his patented turn-around jump shots to win the game, 44-42, in sudden death overtime – the final sudden death game ever played in the state of Ohio. The Pioneers drilled Toledo Libbey, 68-51, the next night to qualify EHS for it’s first-ever appearance in the state tournament. Elyria lost the semi-final game, 54-52, to eventual state champion Portsmouth. Johnson (409 points), Rick Coven (330) and Ken Dick (276) were the high scorers on the team. Jim Garbash (236 points), Steve Hays, Bill Jackson and Dick Roberts were other major contributors to the success of the team. Johnson was said to be Reichenbach’s pet project from his freshman year on – turning him into a great scorer and rebounder. Garbash, ironically, hadn’t played varsity basketball all through high school until he was invited to try out for the team for his senior season after Reichenbach had told him to play in the local YMCA league to hone his skills and become the point guard on the state-bound team. 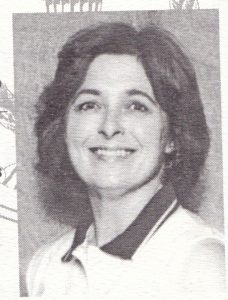