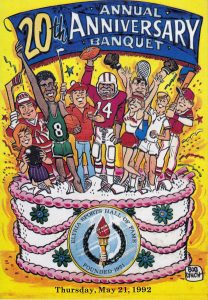 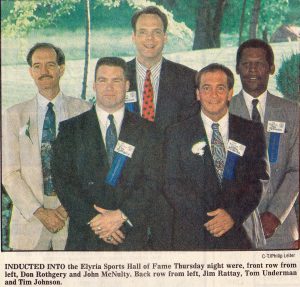 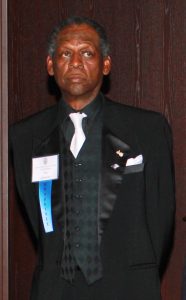 performed very well. At Elyria High, Johnson was a two-sport star – excelling both in track and in football. Johnson won the Lorain County Decathlon in 1966 – one of only two sophomores in the 27-year history of the event to take the top prize. The following year, he was runner-up. In football, Johnson was a wingback on an outstanding 1966 Pioneer team that finished 8-1-1 and finished second in the Buckeye Conference to Sandusky. As wingback, Johnson was mainly a blocker for fellow hall-of-famers Jack Beidleman and Al Robinson but he still finished with a 5.4 yards per carry average – accumulating 323 yards rushing on 59 attempts. He was second to Beidleman in scoring with 28 points and was named to the honorable mention team for the Buckeye Conference. Thanks to his blocking, Beidleman ran for over 1,100 yards and Robinson nearly 700. Johnson’s best night came in a 35-8 pasting of Findlay when he carried 12 times for 86 yards – a 7.1 average. Elyria received the second half kick and marched 87 yards in 10 plays with Johnson getting the call seven times for gains of 13, 14, 14, 4, 5, 4 and the final seven for the touchdown. In track, Johnson set records in the low and high hurdles to lead Elyria to the District championship. Some observers called the ’67 Pioneers the best track squad ever assembled in Lorain County. Also on the squad – in addition to Johnson, Beidleman and Robinson – was record setting pole vaulter Jerry Klyop – also an ESHOF. Johnson “paid forward” by returning to Elyria to assist in track and football. He’s also been an assistant at several other area schools.

John McNulty has done it all when i 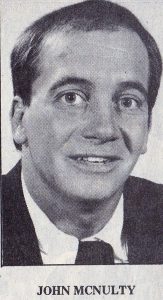 t comes to wrestling. As a senior at Elyria High, McNulty capped a 30-0 season with a state championship in 1978. He went on to become an international champion, winning the World Games freestyle championship for wrestlers under 21 years of age at 136 pounds. In 1979 he was bronze medal winner for the United States in the Pan Am Games in Greco-Roman competition. He also wrestled for the United States against Mexico, Canada, Korea, and West Germany. In 1975 – prior to his sophomore year, McNulty won seven matches at the world team tryouts in Omaha to earn a berth on the U.S. World junior team which went on to compete with teams from 27 countries in Santa Domingo. He captured a gold medal at Santo Domingo, winning five matches in the 132-pound class. He pinned competitors from Argentina and Panama, while his other victories came over wrestlers from Switzerland, England and Peru. The U.S. team won the tournament with six firsts, two seconds, and one third. During his senior season at Elyria, the Pioneers compiled a 10-1 dual record and won the Buckeye Conference championship. The Pioneers placed eighth in the District and 11th at State. He enrolled at the University of Arizona where he wrestled at 142 pounds for two years, transferring to Louisiana State after Arizona dropped the sport of wrestling. At Arizona, his record was 18-3 before transferring. A motorcycle accident ended his mat career but his love for the sport did not end. He became involved in coaching – first as an assistant to Dan Ternes at Southview before completing successful stints as head coach at both Elyria and Elyria Catholic.

It was by pure luck that Elyria Catholic hired Jim Rattay to take over as head coach for the 1976 season. Rattay became one of the most successful high 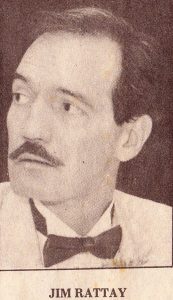 school coaches not only in Lorain County but wherever he went. Rattay was hired very late prior to the 1976 season after the sudden resignation Mike Noonan. Rattay went on to take that team to the state championship and finished his outstanding EC run by winning the 1983 state title. In his eight years as head coach of the Panthers, Rattay was 79-7-3. Five of his teams qualified for the state playoffs including a runner-up finish in 1977. Two other times, his teams were eliminated by the eventual state champion in the semi-finals. While at Elyria Catholic, Rattay never lost more than one regular season game, never lost an Erie Coast Conference game, and never lost at Knights of Columbus field—EC’s home turf. EC lost only one game to a county rival under Rattay’s tutelage. EC had compiled a 38-game regular season winning streak when he left following the ’83 championship season. Fifty of his players made either first or second team All-Ohio and he was named the Coach of the Year by both wire services in 1983.  The Panthers continued their success the next season with another undefeated, state champion that Rattay certainly laid the groundwork for. Rattay went on to a successful year at Euclid in 1984 before heading west where at Mesa High in Arizona he won a couple more state championships.

In a sport generally dominated by Canadians, Elyria’s Don Rothgery found a way to attain a great deal of success. A graduated of Elyria High in 1981, he became the first Elyrian to 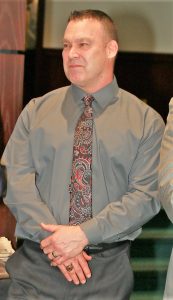 earn a hockey scholarship and play at Ohio State. Rothgery played youth hockey in the Elyria program up through his sophomore year when he switched his emphasis to Juniors. He competed with the Cleveland Americans as a 16-year old, then went on to play with the Cleveland Junior Barons, the Austin (Minnesota) Mavericks and the Waterloo (Iowa) Blackhawks. At age 17, he was a member of the select group representing Ohio at the Olympic Training Center Camp in Colorado Springs. Rothgery fine-tuned his prowess at Ohio State where he earned four letters and played a major role in the Buckeye’s program. He was Ohio State’s Defensive Player of the Year as a senior – a rare feat for a forward position. Professionally he saw minor league action with the Miami Valley Sabres, Knoxville Cherokees and the Virginia Lancers. In addition to his hockey, Rothgery was an accomplished runner – earning two track letters and three letters in cross country letters for Elyria High. He was a member of the 1980 Buckeye Conference champions. After his hockey career concluded in 1989, Rothgery turned to weightlifting where he won the 1990 Ohio Regional Qualifier, lifting over 1,537 pounds.

It was quite a year for Tom Underman in 1992. He became part of the second class of enshrinees at Robert Morris College’s Hall of Fame and then joined his late brother Jay in the Elyria 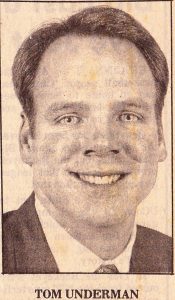 Sports Hall of Fame a few months later. Tom was the last of the four Underman brothers to play for Elyria High and upheld the tradition established by Jay, Rick and Mike. Tom played three years on the Elyria varsity – leading the team in scoring and rebounding as a junior and a senior. He was first team All-Buckeye Conference, All-District, All-Lorain County and third team All-Ohio as a senior. He led the Buckeye Conference with a 23.0 point average. He was fourth in free throw percentage and fifth in field goal percentage. Tom was named as a co-winner of the Lorain County Mr. Basketball Award as he turned Elyria around from a 6-15 season as a junior to a 13-8 winner in 1981. His career at Robert Morris was also honor-filled. He scored 1,210 points, grabbed 576 rebounds and was the school’s all-time free throw leader with 388. His name is listed prominently among the leaders in several categories at Robert Morris. His high game came in a victory over Buckness in 1984 when he poured in 35 points. He was named to the league’s all-rookie team in 1982 and its all-league team as a senior. He was an honorable mention on the AP All-American team in 1985. Tom played on two NCAA tournament teams while at Robert Morris and became the school’s first player to exceed 1,000 points and 500 rebounds in his career.

The chance to honor Karoly Molnar was one the Elyria Sports Hall of Fame couldn’t pass up. When the Distinguished Service Award was created in 1991, it was agreed the honor would not necessarily be awarded annually but Molnar’s commitment to the city’s youth and his tireless effort to organize Elyria’s first youth soccer program made the decision an easy one. Molnar not only organized the youth league but he followed it up by coaching and officiating.

Molnar, an ex-Hungarian freedom fighter who fled Budapest in 1956 after the Soviets had 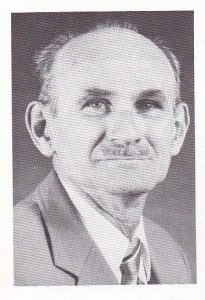 crushed the gallant Hungarian rebellion with tanks, is very deserving of the second such Distinguished Service Award. The first was awarded to Jack Wilhelm.

Soccer has always been Molnar’s game. He played it and gave it his support as a youth. He brought its roots here and, even though he has embraced the more traditional American sports, his first love is soccer.

He played on the Serbian team here in the early 1960s and as an official in 1968. He later was the junior varsity coach at Westlake High School. In addition, he coached CYO basketball and track at St. Jude and has been a long-time booster for Elyria Catholic. Molnar even covered the professional team in Cleveland — the Force — as a sportswriter for the Chronicle-Telegram

In the 1970s, Molnar began the Greater Elyria Soccer Association that still flourishes today. The group not only provides a soccer outlet for area girls and boys, but paved the way for soccer to be included in the athletic programs at both Elyria High and Elyria Catholic. He passed away in June, 2020.