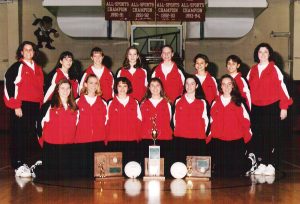 Carol Russo created a dynasty in volleyball at Elyria High during her 26 year Hall-of-Fame coaching career but perhaps the pinnacle was her 1996 team that advanced all the way to the state finals before losing to unbeaten Cincinnati Seton at Dayton. The Pioneers finished the year 28-1 led by seniors Erinn Kingman, Brooke Bader, Amber Nagy, Courtney Shaffstall and Sarah Verhoff. Other members of the team were juniors Alison Mattey, Heather Brady, Stacy Fenwick and Rachel Cragun along with sophomores Kristi Branam, Jenn Snyder and freshman Jessy Verhoff. Kingman and Bader were named to the All-Ohio team. During the regular season, the Pioneers were forced to go three games only five times in winning all 22 of their matches. In the tournament run, Elyria defeated North Ridgeville in the sectional; Brunswick and Amherst in the district and Toledo Central Catholic and Magnificat in the regional. Magnificat, a long-time nemesis of the Pioneers, gave Elyria all it wanted in the regional final, winning the first game 15-13 and grabbing a 12-7 lead in game two before the Pioneers came back to win the 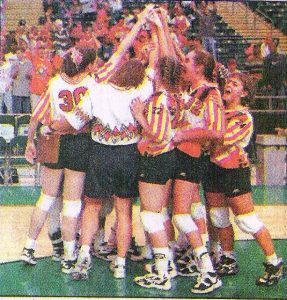 championship by identical 15-13 scores. In the state semi-final against Cincinnati McAuley, Elyria again had to bounce back after dropping the first game, 11-15. After winning game two, 15-4, the Pioneers fell behind in game three, 9-13, before rallying to win, 15-13. At that time, volleyball was played with side-out scoring as opposed to the rally scoring method used since the 2004 season. The team still holds the record for most wins in a season (28) and several team marks in side-out scoring including most kills (806), most sets (2031), most assists (681), and most serve-receptions (900). Kingman holds the single-season record for assists in side-out scoring with 646. Bader had 246 serve receptions and 205 digs while Nagy had 208 digs – all near the top all-time in single-season side-out scoring for Elyria.