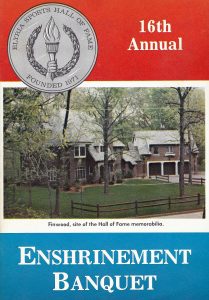 Maintaining enthusiasm for sports for decades and decades is hard to do but John Fritz was able to do just that. Born in a small coal-mining town in 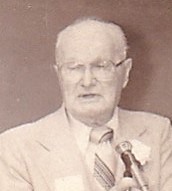 Pennsylvania, Fritz moved to this area as a youngster and immediately began to etch his name in the Elyria sports history books. Fifty years later, his name was still widely known around the baseball diamonds, football fields and bowling alleys of the city. Forced into the workforce as a young teenager in order to help support his family, Fritz never benefited from the instruction, which help propel today’s athletes. Instead, the talented youngster keyed on his extraordinary talent and drives to become good at everything he attempted – earning him the label of self-made athlete. Second only to his family, sports were Fritz’s life. He was inducted into the Elyria Sports Hall of Fame at the age of 82. He excelled in football and baseball in his early years. On the gridiron, he played well enough to reach the semi-pro level but it was in baseball, which captured his heart. He played the hot-corner (third base) on numerous city and league championship teams in the 1930s and 40s, before moving on to managing spots in baseball and softball when his playing days were over. He was one of the initiators of the traditional “Mud Bowl” softball game still played annually on New Year’s Day between the Bittner’s and the ‘38’ Club. Fritz didn’t slow down as middle age approached. Rather he shifted gears, mastering the sports of golf and bowling in his later years. He carried a 185-190 average for 20 years on area lanes, earning him countless tournament honors. The bowling prowess finally led him to the ultimate honor – an appointment to the Elyria Bowling Hall of Fame. Fritz was also a great supporter of Elyria Catholic athletics.

They say that dynamite comes in small packages and is very dangerous. Joe Gentile was pretty small but when it came to boxing, he was very explosive and it didn’t take him long to become recognized as one of the finest amateur boxers ever to come out of Elyria. Gentil

e began his boxing career in 1959 and just a year later was runner-up to Jimmy Moon in the Lorain Golden Gloves. Moon 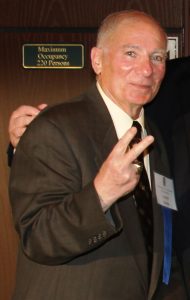 later went on to win the national tournament and was the only Lorain County fighter to beat Gentile, who compiled a 52-5 record during his short but illustrious career. Gentile boxed at 112 pounds and gained one of his most rewarding victories in 1960 when he defeated Tommy Fix, the Colorado AAU and Colorado state champion. Fix went on to the pro ranks and ended up winning the Ohio state championship. In 1961, Gentile won the Lorain Golden Gloves Open title and advanced to the Cleveland District, where he lost in the semifinals to the eventual champion. Gentile did not box from 1962-67 but returned to claim the open division featherweight crown in Lorain the following year. Following his retirement from boxing, Gentile quickly became recognized as an outstanding trainer, helping William Stafford and Jim Ralston win district titles in 1969. He also worked with Sean Mueller of Sandusky who won the Toledo Golden Gloves title that year. In 1970, Gentile joined forces with Lorain’s Pete DeSantis and the two shared the novice trainer’s award for Lorain Golden Gloves. The following year, he formed the Gentile Athletic Club and won the novice trainer’s award again, producing four Golden Gloves champions and four runners-up. He took the four champions to Cleveland and they helped him win the Northern Ohio Novice Trainer’s Award. In 1972, Gentile won the open and novice division trainer’s awards, producing eight champions and two runners-up. 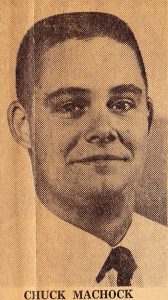 for points in a season at that time (377). He went on to the University of Cincinnati during the Bearcats’ basketball glory years and played two seasons. After graduation, he got into coaching at St. Henry High School in Erlanger, Kentucky, winning 14 games in 26 outings. He then returned home to coach Elyria Catholic for six seasons. He never had a losing season at EC – winning 73 games, losing 42. Twice he was named conference Coach of the Year. His 1966 Panthers were 18-2, winning 17 games in a row – a school record at that time. Machock then got into college coaching, starting the program at Lorain County Community College. He

stayed two years, posting records of 12-9 and 22-4 before moving on as an assistant at Akron. A year later, he became head coach at Steubenville College, inheriting a team that was 3-19 the year before. In three years, Machock was 31-44 but left in a dispute over the general direction of the program. He became an assistant coach at West Virginia, staying two years before taking a similar assignment at Ball State. When Eldon Miller became head coach at Ohio State, Machock became his righthand man and chief recruiter. He landed such stars as Clark Kellog and Jim Smith for the Buckeyes. Machock stayed at Ohio State for seven years before getting the head coach job at Central Florida. He started slowly, losing nine of his first 10 games, but turned it around to finish 16-13 as a Division II school. In 1985, as a Division I school, Central Florida was 10-18 after losing 10 of its first 11 games to such baskeball powers as Ohio State, Dayton, Arkansas, Florida and South Carolina. Machock later joined Bobby Huggins at Cincinnati and became the voice of the Bearcats on the radio for many years.

Injuries and adversity put George Machovina’s football career at both Elyria Catholic and the Air Force Academy in jeopardy, but in each case, Machovina overcame the odds. Machovina

was one of Elyria Catholic’s brightest football prospects as a sophomore on a senior dominated team and helped EC’s defense in one of the school’s greatest performances against the Panther’s fiercest rival – undefeated Lorain St. Mary. Pressed into service when starter (and later head coach) Bill Groomes was injured, Machovina held up his defensive tackle position. Although St. Mary won, 8-6, in a battle of unbeatens, the 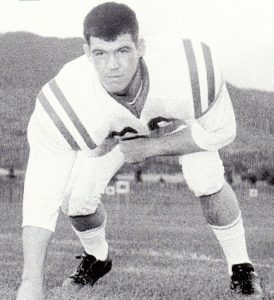 defense held the Irish to five total yards on offense and zero first downs.  In July of 1967, Machovina was in a serious automobile accident that broke his leg and pelvis and a knee that was stationary for six months. He missed the entire football season and faced the possibility of never playing again. But he did play and play well enough to attract the Air Force Academy, but once he got there, he became the forgotten man. He didn’t play in a single freshman or intra-squad game and was convinced he was about to be cut from the team. But he took advantage of a chance to play middle guard in an intra-squad practice session and it proved to be the break he needed. He played defensive end as a sophomore and played in every game as the Falcons compiled a 9-2 record and a berth in the 37th annual Sugar Bowl Classic against Tennessee. One of Air Force’s regular season wins came at the expense of Stanford, quarterbacked by the great Jim Plunkett, who later led Stanford to a Rose Bowl victory. Machovina was the first EC grad to play in a major bowl game and was credited with the first tackle made against the Volunteers. Machovina passed away on December 2, 2012.

Very few young men playing the game of football in high school get the chance to move on to the college ranks in Division I. Even fewer get drafted to play professionally. Jack Matia experienc 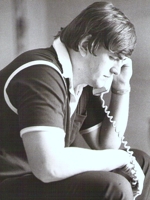 ed both. Matia’s football prowess began at Elyria Catholic where he earned several honors before graduating in 1975. After attending Iowa Lakes Junior College his freshman year, Matia transferred to Division I Drake University where his football career really took off.  Matia made the switch from defensive tackle to offensive tackle and impressed his coaches, his opponents and professional scouts. Following his senior year, Matia was named Drake’s Most Valuable Lineman and made the All-Missouri Conference team in both the AP and UPI polls. He was honored with an honorable mention All-American by the Associated Press. Matia’s feats did not go unnoticed. He was named to play in two important post-season All-Star games – the Blue-Gray Classic and the Senior Bowl. Matia started for the North squad in the senior bowl and played well enough in both contests to open the eyes of pro scouts and coaches. He was selected in the 7th round by the  Oakland Raiders in 1979 (receiving phone call left). His chances of making the team were hampered by a injury to his left knee, which he had suffered at the Senior Bowl. Ten day into training camp, he underwent surgery and was placed on the injured reserve list. The injury eventually proved too much for Matia to overcome and the Raiders released him. Today, Matia is the owner of Matia Honda right here in Elyria.