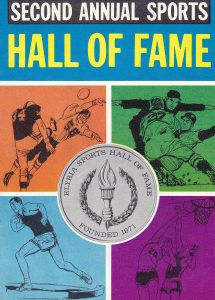 Elyria High’s football program was floundering when Bill Barton arrived on the scene in 1955. The Pioneers had only two winning seasons since the glorious undefeated 1947 squad led by Vic Janowicz. Twenty-three seasons later, Barton had amassed 152 wins, lost 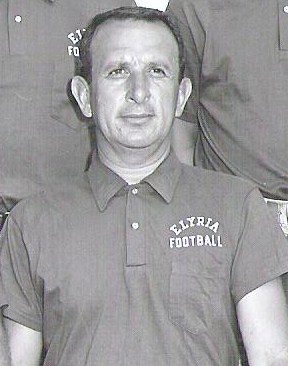 only 64 with nine ties. To put that in prospective, the next best coaching record at Elyria was Roy Clymer’s 64-37-6 over 11 seasons in the 1930s and 40s. Barton led Elyria to three undefeated campaigns (1968, 69 and 71) in an era prior to the football playoffs. The Pioneers were ranked as the 2nd best team in the state two times (1969 and 1971) and were 3rd in 1964, 4th in 1968, 5th in 1972, 8th in 1958, and 10th in 1959. Playing in what was arguably the best football conference in the state at that time, Elyria won or tied for five Buckeye Conference championships.  During a five-year span (1968-1972) Barton’s teams won 46 games and lost only four. Against Elyria’s biggest rival – Lorain – Barton was 15-6-1, winning 14 times in 16 years at one point. Three of his biggest successes came against state power Sandusky. In 1962, Barton sent his winless (0-7-1) team against the undefeated and highly ranked, Earl Bruce coached Streaks and trailed 20-0 after three quarters before Elyria rallied to tie the powerful Blue Streaks, 20-20.  In 1964 Elyria pounded the undefeated Blue Streaks, 32-6, at Sandusky in a game Barton later called ‘my sweetest victory’. In 1969, Elyria drove for the winning touchdown in the final minutes to preserve its unbeaten season with a 13-12 victory over Sandusky at Ely Stadium. Barton had previously coached at both Tallmadge and Wadsworth (his alma mater) and wound up with a career mark of 187-82-9. Barton was the starting quarterback at Kent State and led the nation in punting in 1948. Barton passed away in 1999. 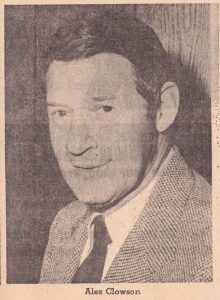 e Buckeye Baseball team in 1934 and finished his Ohio State career with a .301 average as a senior. He also competed on the Buckeye freshman basketball team and later was an assistant baseball coach at Ohio State for 10 years. At Elyria High, Clowson was a multi-sport talent – playing well on the diamond, the basketball and tennis courts, and the football field. As Captain of the 1930-31 basketball squad that finished the season 14-7, he became Elyria’s first All-Lake Erie League selection in 1931. He played for fellow Hall-of-Famer Jack Ambrose’s American Legion teams. A knee injury prevented Clowson from further competing professionally in baseball in 1939 after he had signed with the Cleveland Indians. Clowson’s last stop in the minor leagues was Mansfield, where he was player-manager. Clowson served in the Army Air Corps during World War II. He had been captain of the baseball team at Ohio State, and had led the Big Ten in hitting in 1932 and 1933. The people who knew him back then thought he would have a shining career in the majors. In fact, the Indians signed him to a contract but he injured his knee, and in the big leagues being just half a step slow means you’re probably not going to make it. So from 1935 to 1941, he played in the low minor leagues, for Class C and Class D teams like the Zanesville, Ohio, Greys, and the Oswego, New York, Netherlands, and the Monessen, Pennsylvania, Indians. He was good friends with George Steinbrenner, legendary owner of the New York Yankees. Clowson passed away in 1999.

wicz – the eventual Heisman Trophy winner at Ohio State in 1950 because Elyria High had an incomparable one-two punch in their football backfield. At fullback was Tony Curcillo who went on to make quite a name for himself. Curcillo, a junior on the unbeaten ’47 team, averaged five yards a carry and scored six touchdowns in earning All-LEL honors along with Janowicz. In ’48, Curcillo again averaged five yards an attempt and doubled at linebacker for the Pioneers. He followed in Janowicz’s footsteps to Ohio State where he played quarterback, fullback and linebacker for the Buckeyes. He was the first starting quarterback to play for Woody Hayes at Ohio State. In 1951 against Iowa, Curcillo threw four touchdown passes and rolled up 292 yards in the air as Ohio State won easily, 47-21. He was an All Big-10 selection twice and gained honorable mention status in the All-American voting. At the 1952 East-West Shrine game, it was Curcillo’s block of an extra point that was the difference in East’s 14-13 victory. He played a year in the NFL for the Chicago Cardinals and later was an All-Canada choice for the Hamilton Tigercats in the Canadian Football league and played on the Grey Cup champions in 1957. He retired after the 1958 campaign. Tony passed away in 2020.

nnually at each of its member schools to the senior who demonstrated the greatest proficiency in scholarship and athletics. For the 1947-48 school year, Elyria’s Robert Jabbusch won the award at Ohio State as a guard on the football team and an engineering student. Jabbusch’s Ohio State career was split due to World War II. Jabbusch was a starting for Paul Brown’s 1942 National Champions and he played in the 1944 College All-Star game against the Chicago Bears before entering the military. He came back to Ohio State and was captain of the 1947 Buckeyes and was called the best lineman in the country by Brown. Jabbusch was drafted by the NFL’s New York Giants and the All-American Football Conference’s San Francisco 49ers but opted instead for an engineering career. Jabbusch was captain of Elyria High’s 1940 football team and was an All-Lake Erie League selection. Jabbusch passed away in 2008.

If you grew up in Elyria during the 1940s, 50s, and 60s, the name Lou Kolopus is a familiar one. Kolopus was Supervisor of Health and Physical Education for the Elyria City Schools. He organized the football, basketball and track programs in the elementary schools, retiring in 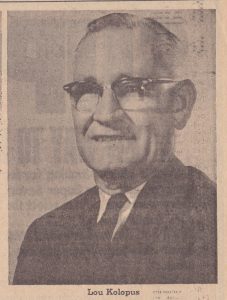 1972. Kolopus distinguished himself in virtually every field of athletics. As an athlete, he was the only underclassman on the legendary 1923 Elyria High football team. He threw the shot put and the discus for the track team. At West Virginia Wesleyan, he played football, basketball and tennis as well as being a member or the boxing team. As a coach, Kolopus tutored the football team at Wellsburg, West Virginia and organized the six-man football squad at Avon in 1939. He was an assistant coach at Oberlin College and assisted Elyria head coaches Roy Clymer and Ike Trubey. He coached basketball and track at Avon – never experiencing a losing season. He started the boxing program at Oberlin College where he coached the sport for two years. As an official, Kolopus worked high school and college football games for 37 years beginning in 1934.  He also officiated high school basketball. He was secretary-treasurer for the Northern Ohio Officials Association, serving one year as president. For many years Kolopus directed the district tennis tournament. He passed away in 1997 at the age of 90.