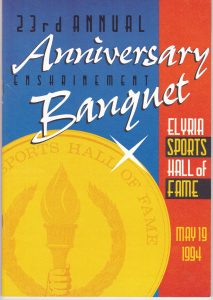 rs lead as outstanding athletes and Bob Kaminski certainly fills the bill. Bob followed his brother Dale as one of the greatest athletes in Elyria Catholic history. Big Bob – 6-foot-5, 265 pounds, played football and basketball for the Panthers and went on to play offensive guard at West Virginia University. As a senior at EC, Bob was named the Most Valuable Lineman for the 1971 8-2 Panthers – a team that wound up second in the North Central Conference. He was a key member of the 1970-71 basketball team that became the first in school history to win a District championship and qualify as a member of the “Sweet Sixteen”. Bob’s heavy recruiting schedule kept him from participating in basketball as a senior when he selected the Mountaineers and lettered twice under the legendary Bobby Bowden. His last year at West Virginia, the Mountaineers finished 9-3 and defeated North Carolina State – then coached by Lou Holtz – in the Peach Bowl. Bob had aspirations of playing in the NFL but a neck injury prevented him from taking his fifth year (he was redshirted as a freshman) with the Mountaineers and kept him from entering the professional draft. Bob remained active in the West Virginia football program as a recruiter while selling heavy industrial equipment in Beckley, W.V.

coach for the Pioneer program earned Steve Lengel recognition as a member of the Elyria Sports Hall of Fame. Lengel was a member of some of the most memorable teams in EHS lore. He played on the 1959 football team that tied Lorain and Marion for the Buckeye Conference championship – finishing with a 7-1-1 record. He played on the Hall-of-Fame 1958-59 basketball team that was the first to go through the regular season undefeated. The Pioneers weren’t defeated until losing to eventual state champion East Tech in the Regional semi-finals. A year later, he played an integral role on the 21-4 Regional finalists and that spring wound up his high school career as a member of the Buckeye Conference co-champion baseball team. Upon graduation, Lengel accepted a football scholarship from Ashland College and played three years for the Eagles. After receiving his B.A. from Ashland, Lengel went on to get his Master’s Degree at Kent State. As a youngster, Lengel played Little League, Pony League and American Legion Baseball. He was a member of LLW’s district champions and participated on several junior high track, wrestling and basketball teams at Franklin Junior High.

One of the most versatile athletes of the 1930s in Elyria High history was Jack Meyer. Meyer was a standout in football, basketball and track – earning three letters each on the gridiron and basketball court and one in track. He wa 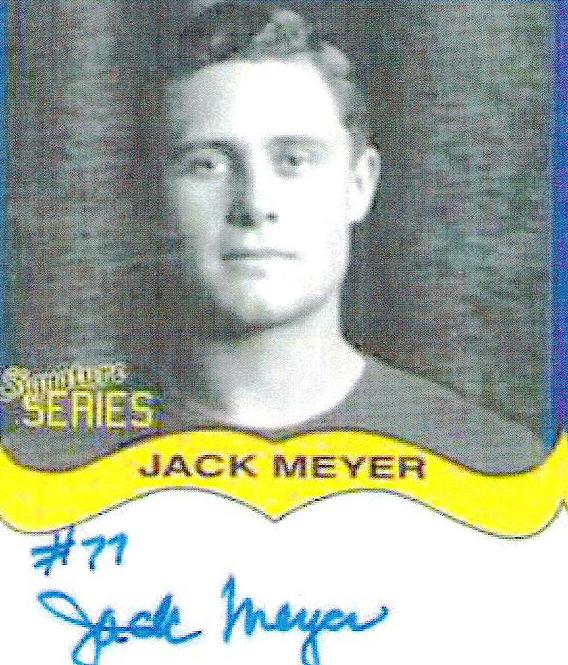 s an All-Lake Erie guard on the school’s championship basketball team and won similar honors for the football team. He attended Kiski Prep in Pennsylvania for one year – earning letters in football, basketball and baseball and continued his football career at Michigan where he played quarterback for the Wolverines during the Tom Harmon era. In fact, Meyer was Harmon’s roommate and received the prestigious Sphinx and Druids awards for his participation in sports. His career came to a premature finish in 1938 when he suffered a severe knee injury in the middle of the season. Although he tried to play again, his playing days ended three games later in the season finale against Ohio State when he re-injured his knee. Meyer, knicknamed ‘Keg’ in college because of his build, played under Roy Clymer, who also coached ESHOF members Ed Czak, Fred Lehmann, and Tony Wolodzko.

Though very active in Lorain County politics, community matters and owner of a successful insurance business, Vic Stewart still found time for his kids – not only

his own 10 – but the hundreds of others he coached in his two decades of coaching Elyria’s Little League baseball and youth basketball leagues. Stewart’s love of baseball began in the 1940s as a player at Elyria High. He went on to John Carroll University where he had ideas of coaching high school athletes but passed them up in favor of the insurance business. Instrumental in organizing Little League North, Steward began coaching youth baseball in 1954 and found immediate success with a 20-0 season. That team, co-coached by Ted Tracy, is believed to be the only one in Elyria Little League history to finish a season undefeated. Stewart had several 19-1 seasons as well. A strict disciplinarian on the diamond, Stewart compiled a record of 274 wins and 165 losses in his tenure at North and East. Stewart was an All-Star manager five times – winning the East championship once and the North title nine times. His teams finished runnerup in the city tournament three times and once he won the Elyria City Championship in 1972. Stewart coached basketball for 22 years – winning 25 games with the YMCA Class D team in 1943-44. A few years later, he took St. Jude to several CYO championships. Now retired, Stewart looks back on a long, illustrious career in local politics. He served on the Lorain County Board of Elections for 30 years, was a member of Elyria City Council and served the city as Mayor in 1959. Stewart served on the Lorain County Democratic Central Committee from 1964 to 1984 and was chairman of the Elyria Democratic Central Committee from 1956-1986. He was a delegate to the National Democratic conventions in 1964 and 1968. He retired as the Lorain County Democratic party chairman in 1990. He also served as the county’s chairman for Gov. Richard Celeste’s campaign in 1978. Stewart and his wife – the former Helen R. Murray – have 21 grandchildren. Vic passed away on October 30, 2011.

he greatest football rally to avoid defeat in Elyria High School history. A quarterback for the 1962 Pioneers, Van Valkenburg started the fourth quarter of the Sandusky game trailing 20-0. The Blue Streaks were undefeated and ranked as the second best team in the entire state. Elyria hadn’t won a game all year. When the final gun sounded, Elyria had miraculously tied the powerful Streaks, 20-20, sending shock waves around the state. Van Valkenburg had two touchdown passes and connected on a 2-point conversion pass that knotted the score. Coach Bill Barton – ill with the flu – directed the game from the warmth of the press box. He called the game one of his greatest coaching thrills. Van Valkenburg was the starting quarterback for the Pioneers for three seasons and was named All-Buckeye Conference as well as honorable mention to the All-state team. In baseball, Van Valkenburg was named to play in the Ohio All-Star game in 1963. He was also a prominent member of the basketball team for three seasons. After graduation from EHS, Van Valkenburg went on to play football at Kent State. Later, his younger brother Al directed Elyria to its undefeated 1968 season. 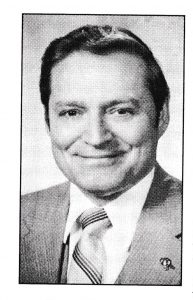 Bob Lynch
For many years, The Elyria Chronicle-Telegram was blessed to have 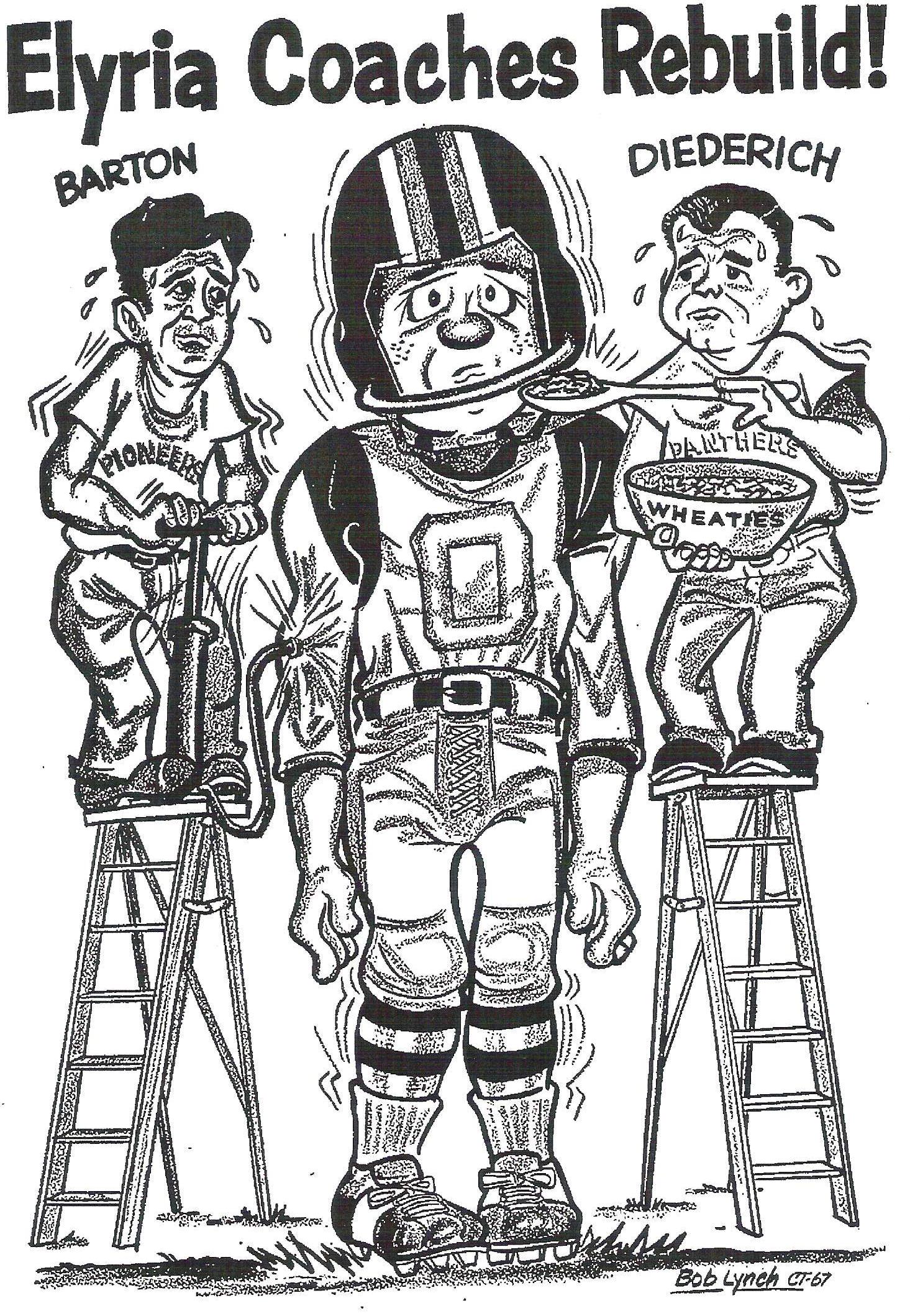 artist Bob Lynch on-board to draw cartoons and caricatures of special sporting events as they came along. At the right is an example of his talent. It’s a drawing that appeared in the Chronicle-Telegram just prior to the opening of the football season showing Elyria High’s Bill Barton and Elyria Catholic’s Wayne Diederich. both Elyria Sports Hall of Famers. For the Elyria Sports Hall of Fame, Lynch drew the caricatures for our ESHOF program through the first twenty-plus years. His editorial cartoons are still one of the more popular features found in the Chronicle. Lynch was a great athlete in his own right and is enshrined in the Midview Athletic Hall of Fame.