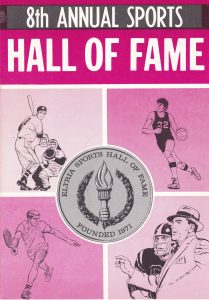 dered one of the greatest track and basketball stars ever produced by the city of Elyria is Wilbur ‘Lank’ Coven. Coven qualified for state high school track meet in four events and scored in three – including a second place finish in the high hurdles. Coven competed against future Olympian Harrison Dillard in the high hurdles and never lost. He scored eight of Elyria’s 10 points in 1939 and all of his team’s points (3½) in 1938 including a 2nd place finish in the high jump. In basketball, Coven was just as impressive. As a senior, he scored 277 points, the most in a single season at Elyria at the time. He was named to the All-Lake Erie League team three years and was selected to the second team All-Ohio in 1939 before accepting an athletic scholarship to North Carolina. The Associated Press limited its selection to just five players putting Coven in a select group state-wide. He later transferred to Toledo University before entering the service and starring on the Army team in Mississippi. After his military service, Coven played briefly at Baldwin-Wallace before turning pro with the Rochester Royals of the National Basketball League. The Royals won the NBA title in 1946-47, beating the Chicago Bears – led by George Mikan – in the finals. Coven left the Royals for the new World Basketball Association but the league folded before it started. Coven, who by that time was married and had a family, called it a career. His two sons — Rick and Greg — both played key roles on successful Elyria basketball teams. Coven passed away in 1998.

It was only appropriate that the nickname “Daddy” was given to Hayden Evans. He was the father of bowling in Elyria. Evans was a driving force behind the recreationa 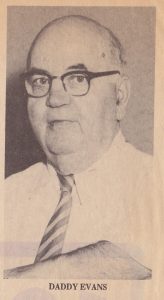 l sport that was at one time THE sport in the city of Elyria. When Evans arrived in Elyria from Toledo in 1916, he worked for the Overland Co. and was sent to organize the company’s sports programs. That included bowling and Evans managed the lanes on Clark Street. He was one of the original organizers of the Elyria Bowling Association which was chartered in 1936. He served as the organization president in 1940-41 and took over the secretary duties in 1943. He held that post until 1964. Evans was instrumental in setting up the by-laws of the EBA and helped organize the annual banquet – one of the best of its kind anywhere. He put together the annual bowling yearbook and was one of the individuals responsible for building an official organization for the city’s junior bowlers. On the lanes, ‘Daddy’ wasn’t bad. He averaged around 175 and was a member of the ITS Rubber Plant team which set a team record in 1945 of 3,183 that stood until 1963. Evans was the first member inducted into Elyria’s Bowling Hall of Fame in a surprise ceremony at the 1965 Banquet of Champions. Evans has a scholarship in his name given to the most deserving junior bowler. Evans passed away in 1967.

On the tennis court, Leroy Johnson was king. Johnson accomplished a record of excellence unequaled before or since. On the tennis courts of Elyria, Johnson was unparalleled. Johnson’s feats included a string of nine straight city singles titles stretching from 1948 to 1956 and 12 consecutive doubles crowns from 1946 to 1958. In all, he won 11 city singles titles, 12 doubles and one mixed doubles. He also won the Duluth, Minnesota city title when he was stationed there during his military service. Johnson also promoted the sport of tennis as a member of the 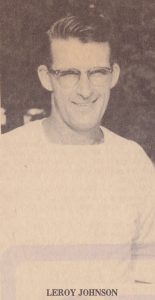 city tennis commission by arranging tournaments, promoting free tennis lessons and clinics and working to install the all-weather clay courts at West Recreation. His prowess wasn’t confined to the tennis courts. Johnson played football, basketball and baseball as a youngster growing up in West Palm Beach, Florida. He played semi-pro baseball in West Palm Beach and had a brief fling in the minor leagues before an arm injury sidelined him. Later, he became a standout fastpitch softball player in the area. At the YMCA, Johnson won every handball and table tennis tournament held there from 1946 to 1958. As with tennis, Johnson helped organize tournaments and exhibitions. Johnson was also a novice golfer – winning Class A and B golf titles in the General Industries shop league. He teamed with his wife, Gerry, to win a mixed doubles bowling tournament at the Slovak Club in Lorain. Johnson was only 62 when he passed away in 1984.

Who could fill the shoes of Wayne Embry after the legendary star center graduated from Miami of Ohio after the 1957-58 season? The answer is Elyria’s own Eddie Wingard. Wingard may not have matched Embry’s scoring total, but the 6-foot-6 senior averaged 12.1 points a game, led the Redskins in rebounding, field goal and free throw shooting and made the Mid-American All- 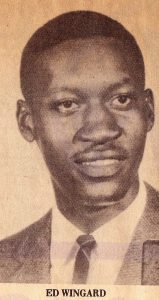 League team. Miami finished with a 14-11 record overall and tied for the MAC title with Wingard its MVP. Wingard was Dale Reichenbach’s first big man for the Pioneers in building the foundation for Reichenbach’s outstanding career. At Elyria, Wingard set records for career and single season scoring and his 32 points against Bedford early in his senior season set the single game mark as Elyria won, 87-39. Wingard was also an outstanding high jumper for the track team and played end and quarterback for the football team. Wingard coached high school basketball at Yellow Springs where he had four winning seasons in his six years at the helm. He was also the head baseball coach and the athletic director. Later, after earning his master’s degree from Miami and a Ph.D. from Ohio State, Wingard became Dean and Professor in the College of Education at Central State University.

Longevity certainly defines the softball career of Jack Yarsa. Still pitching in the city leagues well into his 70s, Ya

rsa won over 2000 games as a softball pitcher with at least 20 no hitters and 50 one-hitters among his accomplishments. He once hurled 34 straight shutout innings and in the 1940s, pitched in eight games in a week’s time – winning seven of them. Jack participated in every state ASA tournament from 1933 to 1976. In 1975, he pitched Rosie’s Pizza to the Lorain County Blue Ribbon Softball Championship by winning two games on Sept. 8, 1975 – 4-2 over First Federal and 3-2 over Adam’s Café. He was called the ‘Satchel Paige’ of area softball diamonds. Born in Joliet, Illinois, Yarsa moved to Lorain in 1917 and has been a Lorain County resident since. Before competing solely in softball, Yarsa was a standout tight end in football and a good ballhandler in basketball. Yarsa passed away in 1996 at the age of 84.