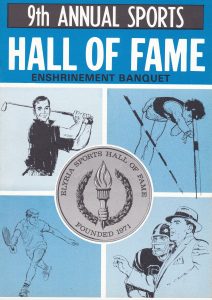 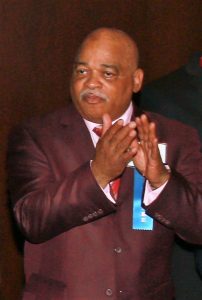 played his last football game. No longer would they have to try to stop the speedy, elusive Beidleman, who seemed to have the balance of a tight-rope wal

ker. “It was Beidleman against the Harding defense and the Harding defense came in a poor second,” wrote a Marion Star reporter after Beidleman had shredded the Prexies with five touchdowns and 220 yards rushing in just 16 carries as Elyria romped 32-3. In fact, twice Beidleman nearly single-handedly defeated Marion. As a junior, Beidleman returned two punts for touchdowns (55 and 80 yards) and scored two other touchdowns on runs of 3- and 20-yards as Elyria demolished Marion, 45-7. All told, Beidleman scored nine touchdowns, rushed for 339 yards in 30 carries, caught a pass for 30 yards, and returned two punts for scores against one school. Beidleman did a lot of that in his two years on the EHS varsity. He rushed for 1,160 yards his senior year to lead the team in scoring with 130 points. Seven of his touchdowns came on plays of 40 yards or longer. He led Elyria to a 8-1-1 finish. He remains among the top in career scoring, touchdowns and rushing. In the spring, Beidleman starred on the track team as a hurdler and sprinter. He also was an outstanding long-jumper. He went on to Akron University and was just as devastating as a runner for the Zips. He is also a member of Akron’s Hall of Fame.

and the University of Dayton. A three-time Lorain County Juniors winner, he copped three North Central Conference crowns for EC and competed in the state meet his senior year after winning the district championship. He was Dayton’s No. 1 player for three years – averaging low strokes per round three times. 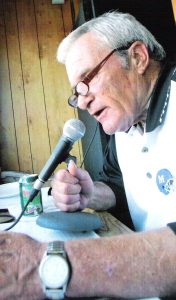 Couch teamed with fellow ESHOF’s Jim Ross to win the Cleveland District Best Ball, the Ashland Invitational Best Ball and the Galion Invitational Best Ball tournaments – three of the top events in the state – in a three week span in 1973. Couch was Oberlin Golf Club’s champion many times and has been ranked in the top ten amateurs in the Cleveland area numerous times. He has served as president and vice president of the Lorain County Golf Association. While Couch’s notoriety came mainly on the links, some of his most cherished memories came on the baseball diamond. Couch was an exceptional Little League and Hot Stove player – recording four no-hitters and twice being invited to tryout camps by the Pittsburgh Pirates. He also competed in football and basketball at EC. Couch, who passed away in June, 2012, was a well-respected attorney in the area and was the public address announcer for Midview basketball and the Division I basketball tournament at Midview for many years. Couch served the ESHOF as chairman in 1983.

still owns the distinction of being Elyria’s top pole vaulter of all time and his vault of 15-foot, 3 inches remains one of the top marks in the county. Klyop was a three-time Buckeye Conference champion and record holder. He held vault titles and records at the Sandusky Relays, the West Tech Relays and the Berea Relays. He won the regional with a then record vault of nearly 15 feet. At the state meet, Klyop won the 1968 state pole vault event with a then-record 15 feet, 1 and ¾ inch vault. It was his third trip to the state meet. Klyop competed in the Golden West Classic – the nation’s elite track meet for high school athletes – and finished eighth. He continued his career at Villanova University and won several important meets. He finished his career consistently vaulting over 17 feet. Klyop is now a practicing physician in the Cincinnati area.

You’ve heard players referred to as a ‘pitcher’s pitcher’ or a ‘hitter’s hitter’. It is a supreme compli 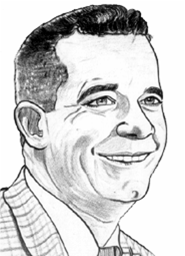 ment reserved for the most respected at their craft.  Stan Machock would come under the category ‘an official’s official’. Machock was recognized as one of the top football and basketball officials in the country. Machock started his athletic career competing in football, basketball and golf while a student at Elyria High. He led Elyria’s basketball team and the Lake Erie League in scoring in 1932-33. He was an All-LEL selection and earned a scholarship to Ohio State. He played freshman basketball for the Buckeyes but dropped out of school due to financial reasons. He played two years of AAU ball with the Humble Oil & Refining Co. in Texas. Machock worked 32 years as a football official and 34 in basketball. In football, he spent 20 seasons officiating in the Ohio Conference. He also worked the Big Ten in 1956. His officiating was ranked either first or second every year. He received the ultimate honor in 1966 when he worked the Rose Bowl game between Michigan State and UCLA. Machock’s basketball officiating days also started in the Ohio Conference and moved on to the Mid-American Conference before he was hired by the Big Ten in 1954. During his 14 Big Ten years, he worked seven NCA and NCAA tournaments. He worked the Ohio Conference finals and nine consecutive AAU tournaments. He officiated at the Olympic trials in 1960 and 1964. Only five officials in Ohio and a dozen men total have worked both football and basketball – Machock is one of them. When he retired, he was rated as the No. 2 whistle-tooter in the league.

crown in 1963. He continued his excellence on the local courts by winning the city doubles championship 12 times and the singles crown 10 times. He has also won six Lorain County championships. Stark had success in other sports as well. He made his little league team as an 8-year old – an exceptional feat in that day – playing against kids as old as 12. He also excelled in table tennis, once winning a tri-state junior boys tournament championship. He was the first member of the Elyria YMCA Gym Leaders when they were formed. That experience greatly influenced his later success as a basketball and tennis coach at Southview High School in Lorain. Stark also played basketball at Elyria High – leading the freshman team in scoring. At Southview, Stark was an intense competitor as a coach. His basketball teams won two district championships and his tennis teams were always very good. In his first year as basketball coach, the Saints pulled a 73-67 upset on then top-ranked and unbeaten Barberton. In 1976, his Saints defeated his alma mater, 59-53, for the district title. In tennis, Stark was the first and only coach at Southview until his retirement. Stark is also a member of the Lorain Sports Hall of Fame. Stark passed away on June 30, 2015. His wife Val, the daughter of long-time Lorain High and Admiral King coach Al McConihe, resides in Lorain.