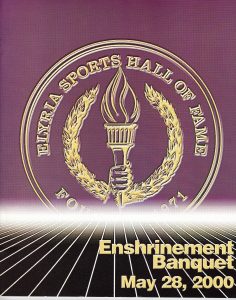 he late ‘50s and early 60s, Elyria High’s athletic prowess was at its peak with many of that era honored by induction to the Elyria Sports Hall of Fame. Among them was Bill Gast. Gast was a star on the basketball court for some of the school’s best teams. As a junior in 1959, Gast helped the Pioneers to an undefeated season and a district championship. The ’59 team is already enshrined in the Hall of Fame. A year later, Gast helped the Pioneers advance to their first regional championship. The Pioneers were district champions during each of Gast’s three years competing with the varsity. Gast’s baseball exploits may have even been better. A shortstop, Gast led the Pioneers to a district title in 1959, the first district championship in school history. A year later, Gast was named All-Ohio with his selection to play in the All-State star series in Columbus. In all, Gast earned eight letters at Elyria – four in baseball, three in basketball and one in cross country. At Bowling Green, he earned five letters – three in baseball and two in basketball. He had a career .300 batting average for the Falcons and on the basketball team played with one of the greatest BGSU squads in the history of the school — teams that featured Nate Thurmond and Howard Komives. BG won the MAC championship in 1962 and ’63. Gast came back to the area and became Lorain Southview’s first baseball coach.

Immediately after graduating from Elyria Catholic in 1953 and earning 10 varsity letters, Hank Ja 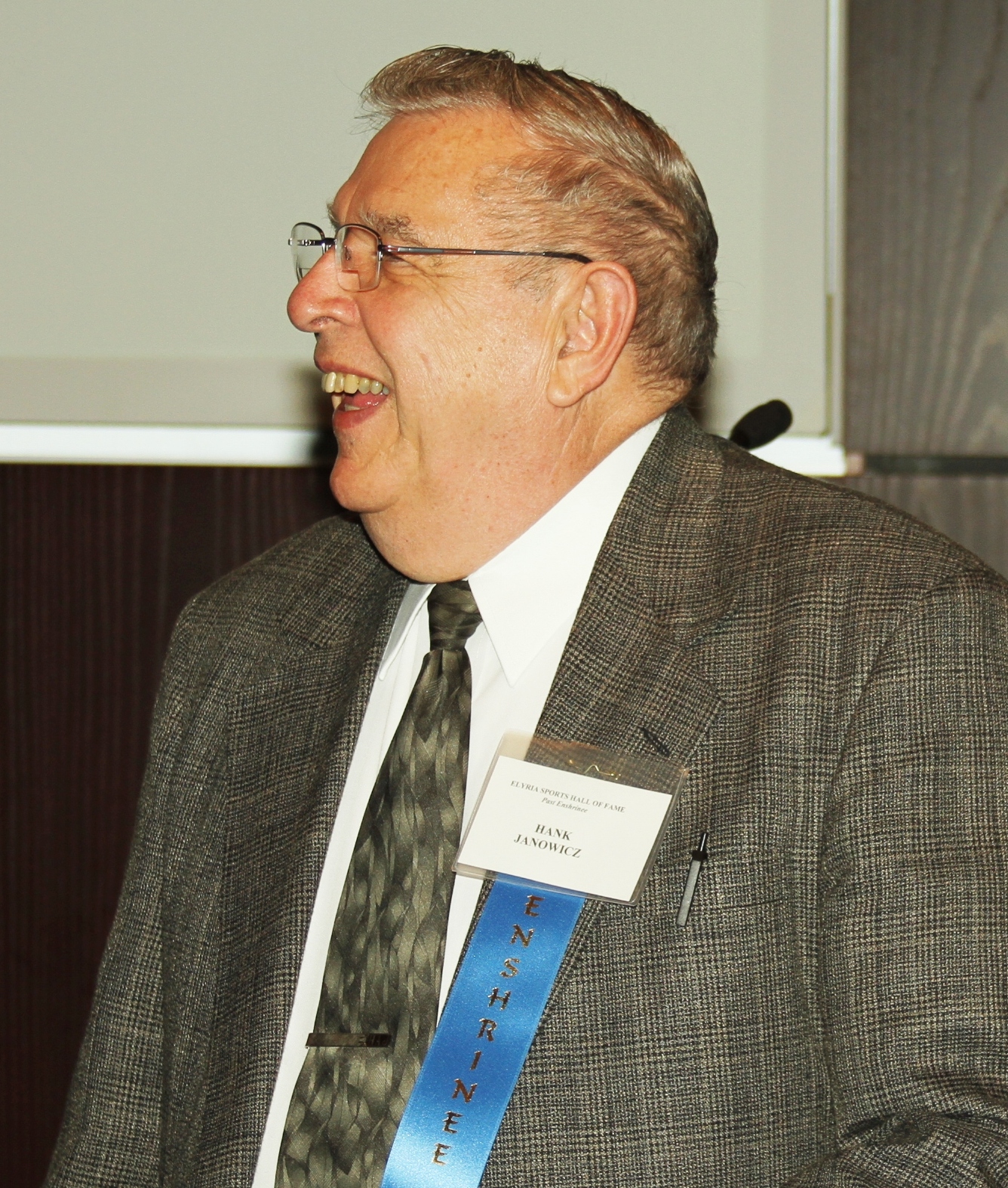 tay involved in sports. He became an official – first as a youth umpire in baseball and later switching to basketball and football. Janowicz refereed over 1,000 basketball games and over 400 football. In his first year of basketball, he officiated 56 games – mostly junior varsity, freshman or junior high games. He built such a reputation for being an outstanding official he was immediately promoted to the varsity level. By 1962, his fame spread and the Ohio Conference along with many colleges around the state, recruited Janowicz to do its basketball and football games. He worked on the collegiate level for 16 years. While officiating, Janowicz served time as president of the Northeast Ohio Officials Association in both basketball and football and was a rules interpreter for other referees at pre-season meetings studying changes since the previous years. After his retirement from active officiating, Janowicz stayed involved by acting as a referee evaluator, hired by college and high school conferences to grade officials’ performances. Hank’s brother, of course, is the famous Heisman Trophy winner and Elyria Sports Hall of Famer – Vic Janowicz. Hank passed away in April, 2019 at age 84.

an Thomas was to Elyria Catholic’s great 1976 and ’77 football teams, Al McKinney was to the Panthers in 1983 and ’84. He was the star tailback, the man who with a burst of speed and a nose for the end zone that brought two state championships to

EC. On a team full of standouts, McKinney was the brightest star. In fact, he played for three years – helping the Panthers to a state semi-final berth as a sophomore and then leading them to back-to-back 13-0 seasons. The 26-game winning streak remained a Lorain County record until Avon Lake eclipsed the mark with its own state championship and runner-up finish in 2003 and ’04. As a senior, McKinney ran for 2,398 yards and scored a nation-high 49 touchdowns – both county records. He is the school and city career rushing and scoring record-holder. He was first team All-Ohio for two years by the United Press International and AP All-Ohio his senior year. He was named Ohio’s Back-Of-The-Year by both wire services as a senior. Twice he was Back-Of-The-Year in the district, Lorain County, and Erie Coast Conference. He was nearly as outstanding in track, winning conference championships in the sprints and the long jump. He was the state’s long jump champion in Class AA with a leap of 22 feet, 9 inches. McKinney was the recepient of the coveted Lou Rotunda Award for athletics, academics and extracurriculars at Elyria Catholic. He went to the University of Cincinnati, playing four years and remains one of the all-time rushers for the Bearcats with 2, 223 career yards rushing. In 1987, he led Cincy with 950 yards on the ground and in ’88 rushed for 829 yards.

onica Taylor graduated from Elyria High and went on to Ohio State, she passed the volleyball leadership torch 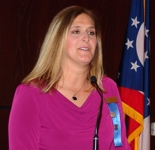 to Amy Schloss and the Pioneers never missed a beat. Schloss was a sophomore and Taylor a senior when Elyria qualified for the state tournament for the first time in Volleyball. Taylor was the state’s player of the year. When she left, Schloss picked up the slack. Schloss was named to the second team All-State a year later and was Ohio’s Division I Player of the Year, MVP for the Erie Shore Conference, Player of the Year in the District, MVP on the Lorain County All Star team and was a representative to the state’s all-star game. She was Lorain County’s Miss Volleyball award winner. In her three years on the EHS varsity, the Pioneers were 74-6 including 25-1 in 1990. The Pioneers won four Erie Shore titles and two districts in her four years in the program. She was outstanding in every area: hitting (89 percent), blocking (53 percent), serving (95 percent) and serve receiving (96 percent). The 5-foot-10 Schloss played collegiately at Michigan State, lettering four years. She was named to the All-Tournament Team in the DePaul Tournament and twice was an All-Big Ten academic selection (1993-1994). She was captain of the Spartans in 1994. Schloss was also an excellent swimmer – competing for the Elyria YMCA swim team and for Spring Valley Country Club. She was part of the Cadet Medley Relay record-setting team at the Y in 1982 and was a record holder and MVP at Spring Valley. Schloss-Yates is a trustee with the ESHOF and chairs the awards committee.

In the late 1980s, you couldn’t tell the change of seasons by watching the stars at Elyria High. The brightest may have been Monica Taylor – no matter what the sport. In the fall it was volle

yball; winter was basketball, but in both cases Taylor was the star, the highlight player who lifted the Pioneers past their rivals. Taylor won both the Lorain County Miss Volleyball and Miss Basketball awards. She was voted first team All-Ohio in volleyball both her junior and senior years and led the Pioneers to their first state tournament appearance as a senior in 1988.  She was also All-Ohio in basketball, leading Elyria to the district finals and a 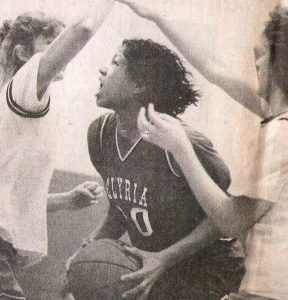 conference championship. She shared the Division I player of the Year award and was named to the Parade Magazine All-America team. She averaged 19.5 points, 11 rebounds and four blocked shots in leading the Pioneers to a 22-2 record and a No. 4 ranking in the state polls. Taylor won four letters in basketball and was all-conference and all county. She helped a team of Ohio All-Stars to a victory over a team of stars from Michigan, scoring 12 points. Taylor could have played both sports at the college level but she chose basketball. She played two years at Ohio State before leaving because of a dispute with then coach Nancy Darsch. Taylor’s legacy at Elyria High helped build the solid female programs the Lady Pioneers have in volleyball and basketball.

On a May day in 1935, it’s doubtful that the four Elyria High runners would realize their performance would bring them lasting prominence. But they did know they had accomplished something pretty special – in fact no Elyria High mile relay team had ever gone the distance in less than three minutes, 40 seconds. At the state track meet, the team of Bob Vanek, Chuck Streicher, Don Hull and

Bob Roe did just that. They didn’t win the state meet – Toledo Scott’s relay team did that. They didn’t even place but their time of 3:33.7 was best in school history and the best ever run by a Lake Erie League quintet to that time. The previous school record was 3:42.2 set in 1931 and the mark Vanek, Streicher, Hull and Roe set lasted 26 years – a remarkable feat. Elyria’s Sports Hall of Fame has honored football, baseball, basketball and wrestling teams but the 1935 Mile Relay team was the first Track team to be so honored. The relay team is pictured (Left to Right): Don Hull, Bob Vanek, Bob Roe and Chuck Streicher.

Back in 1970 when Elliott was executive director of the Elyria Chamber of Commerce, the Lorain Chamber of Commerce launched a sports hall of fame for that city. In December of 1970, Elliott called together a group of city residents involved in sports to organize a Hall of Fame for Elyria. 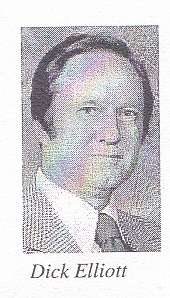 He asked A.N. Chick Smith, then commissioner of the Ohio Athletic Conference, to chair the first banquet. Elliott served as the secretary, a post he held for nine years. The first banquet was held at the old Weathervane in 1972 and has been a signature event in the City of Elyria ever since.