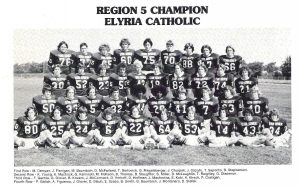 There is nothing like being first – especially when it comes to winning a state football championship. Elyria Catholic’s Panthers turned in the impossible in 1976 in winning the state championship under a first year coach – Jim Rattay. The fact Rattay even had the job is a story in itself as Mike Noonan left the Panthers with almost no notice after a 7-2 record in 1975.  That came on the heels of a 0-10 season in 1974. Imagine a new coach taking over a program at the last minute that just suffered through a winless campaign only two seasons before. However, Rattay, an assistant at Lake Catholic in 1975, saw his team lose its only game in 1976 to the very Cougars he had helped the year before but from that point on, EC was unbeatable – winning its final seven games and trouncing undefeated Brookville, 34-10, at the Rubber Bowl in Akron. The Panthers had knocked off previously unbeaten Huron, 14-0, at B-W in the State semi-finals. In the championship game, Bryan Thomas (right) had an incredible 287 yard rushing night – a City 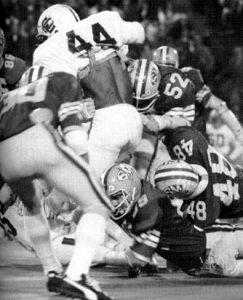 of Elyria record at the time – scored three touchdowns – one a 78-yard TD run and another coming on a kick return of 95 yards – both all state tournament records at the time. The 1976 Panthers paved the way for two other state championships in 1983 and 84. Until Avon Lake turned the trick in 2003 – EC was the only Lorain County school to claim a state football title and remains the only county school with multiple championships.