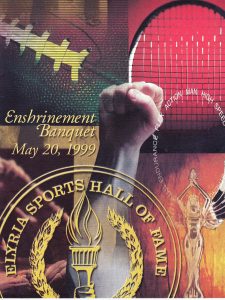 llagher was easy to find on the football field, even for fans who only followed the ball. Gallagher was in the middle of the action – as center on offense and middle guard on defense for Elyria Catholic from 1962-64 and middle guard at Ohio Wesleyan from 1965-68. He was a standout on some excellent teams. During his career at Elyria Catholic, the Panthers – who had an undistinguished football history to that point – won their first conference championship and became the first group t 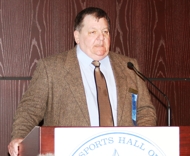 o beat Lorain St. Mary three years in a row. Gallagher earned three letters in football and three in track at EC. The Panthers had an 8-2 record and won their first North Central Conference championship when Gallagher was a junior. He led the team in tackles. He repeated as the team’s top tackler in 1964 when EC finished second in the conference. In track, he threw the shot put and discus. In 1963 he broke John Beno’s school shot put record and then bettered his own mark two weeks later. He won the shot put at the Sandusky Relays and finished second in the NCC conference meet. In college, Gallagher lettered three years in football and Ohio Wesleyan had a 16-1-1 record over his last two years. In 1967, the Battling Bishops were 8-0-1, won the Ohio Athletic Conference championship and were ranked 16th in the nation. Gallagher was a nominee for Small College All-American and led Ohio Wesleyan to first place finishes in defense two years. After graduation, Gallagher returned to EC to coach football and wrestling for one year, then became an assistant coach at Wellington for two years and finally an assistant coach at Bald Eagle High School in Pennsylvania for four years, finishing in 1976. Gallagher left coaching to pursue a career in business. Gallagher has been a trustee on the Hall of Fame board for many years.

s used to roll down the mat but it wasn’t until he starting pinning on the mat that the two-time All-American wrestler gained success. When Lyons was a third grader at age 8, he followed his older sister Jill to gymnastics, somersaulting down the long mat with great success until he found a new love in junior high – the wrestling mat. That ended Lyons’ gymnastics career and launched a wrestling career than included a state championship in high school at Elyria High and All-America status in 1990 and 1992 at Indiana University. Wrestling was Lyons’ main thing but he also played football where he was an all-conference first teamer and honorable mention All-State as a noseguard. In wrestling, Lyons was the state champion at 132 pounds and finished 34-0 his senior season. His career mark at Elyria was 101-14. He was 9-3 at 105-pounds as a freshman, 28-8 at 132-pounds as a sophomore, 33-3 at 126-pounds as a junior before his perfect senior year. In college, he started at 134 pounds as a freshman and moved up to 142 for the remainder of his collegiate career. Lyons earned All-America honors as a sophomore in the NCAA finals by finishing sixth. He missed as a junior but repeated his All-America honors as a senior with a fifth place finish. 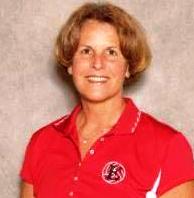 past two decades thanks to the work of Carol Russo. It’s been Russo’s coaching and organizational prowess that has boosted the Pioneers among the state’s most elite and respected programs. When Elyria West closed in 1996, the Volleyball team was one of the few to escape the pains of the merger. Elyria finished that year 28-1 and became the first Elyria High team to win a state semi-final game and play for the state championship. The Pioneers finished as runner-up. It was Russo’s third team to reach the state tournament. When Elyria’s 1988 team made the tournament, Russo and her mother Sue Brady became the first mother-daughter combination to coach teams in the state tournament. Brady’s Oberlin team made it in 1976. Russo’s father Les Brady was also a successful coach in basketball. In addition to the state tournament runs, Russo’s teams have won the district championship 14 times. Elyria also qualified for the state tournament in 1994. Under Russo’s tutelage, Elyria won 18 conference championships in four different leagues: the Buckeye, the Erie Shore, the Lake Erie, and the Pioneer. Russo was inducted into the Volleyball Coaches Hall of Fame in 1998. Russo played volleyball at Oberlin for her mother and played on a Lakeland Conference Champion. She played volleyball at Ohio State and began her high school coaching at Mayfield before coming to Elyria after one year. After 27 years of coaching – including 26 at Elyria, she retired following the 2006 season with a record of 555-119 overall and 543-110 at Elyria. She thought she was finished but when Elyria Catholic’s Volleyball coach stepped down before even playing a game to start the 2010 season, EC’s athletic director Barb Salata sent out the SOS to Russo, who responded to lead the Panthers to their first district championship in 15 years (see picture on righta). EC finished 20-7 — advancing to the regional final before falling — giving Russo her 20th 20-win season in her career and a final overall record of 575-126. In 2012, Russo was selected to the prestigious AVCA (American Volleyball Coaches Association Hall of Fame. For the Hall of Fame, Russo started the “Ring of Honor” as a way for past Hall of Famers to donate to the scholarship fund of the ESHOF.

Any list of Elyria’s all-time best bowlers would have to include Jack “Fat Daddy” Traxler’s name at or near the top. For more than 30 years, when lane conditions wer

e not as they are today, Traxler had a composite 191 average. Six times he won the Pat Henke award for having the highest average in the Elyria Bowling Association. He was the Chronicle-Telegram Bowler of the Year three times – in 1967, 1973, and 1974. He won numerous local titles and twice was the all-event winner in the city tournament. His 771 series at Tarry Lanes in 1963 was (at the time) the second highest series ever recorded in the Elyria Association. His series included 27 strike – 13 in a row. He led his team to a 3,205 series – also an Elyria record at the time. In 1964, Traxler was among the elite bowlers in the entire state and was selected to participate in a Nationwide Insurance Tournament in Columbus. It was televised state-wide and Traxler won two rounds before losing to James Lough of Springfield in the third round. In the tournament, Traxler established records for high single game and series. He averaged 223 and won $1,750.00. He was inducted into the Elyria Bowling Association Hall-of-Fame in 1978. Traxler was more than a bowler. For more than 20 years, he was a standout fast-pitch softball pitcher from 1953 to 1975. He hurled a no-hitter for Pfaudler in the city league in 1953 and led his team to the tournament finals. He had a 6-1 record in the Wellington league, which his team won.  A year later, he pitched Belden to the Elyria finals. In 1955, he fashioned six shut-outs ad Belden won both the Elyria and Wellington titles. Twenty years later he was still winning – pitching the Elyria Bowling Center team to championships in the Elyria regular season and tournament. Traxler died in 1987 at the age of 53.

inees. The middle of three sons of the late Jack Underman, who led the Ohio State Buckeyes to the final four in 1946, Rick made his mark mainly on the football field b

ut – like his brothers – was a pretty good basketball player as well. His brothers earned scholarships in basketball after their playing days at Elyria High, but Rick earned his Michigan State and later Bowling Green scholarships on the gridiron. Rick was a 6-foot-2, 210-pound hard-running fullback and linebacker at Elyria from 1972-74. As a senior, he was first team All-Buckeye, was third in the league in scoring and seventh in rushing with 545 yards. He was also a great lead blocker for tailback Warren Fitzpatrick, who rushed for 1,213 yards for Elyria in the Pioneer’s tailback oriented attack. The key game in Underman’s senior year came against Findlay when EHS overcame a 10-point deficit to upset the Trojans, 13-10. He gained 123 yards that night. The win broke a two-game skid and helped Elyria finish with a 7-2-1 season. Underman was also the team’s punter. When the basketball season rolled around, Underman was the sixth man on the 1975 team that finished 22-2 and won the Buckeye Conference and finished runner-up at the regional. Underman was instant offense off the bench. He scored 16 points in helping Elyria defeat previously undefeated Westlake, 62-60, in the district semi-finals and 14 in a 60-56 victory over Admiral King for the district championship.  Rick played varsity football as a freshman at Michigan State – seeing action at fullback and on the special teams. When Michigan State went on NCAA probation, he transferred to Bowling Green and sat out a year. He played linebacker in 1977 and 78 for the Falcons before forgoing his last year of eligibility.

Arguably the best team to play for the legend 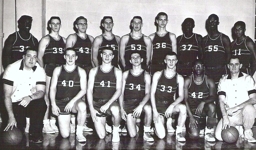 ary Dale Reichenbach, the 1958-59 didn’t win a state championship. It didn’t qualify for the state tournament and didn’t even make it to the regional final, but the accomplishments of this team put it at the top of the list in school history. For one thing, the Pioneers completed the regular season with a perfect 18-0 mark – the first of only two teams in Elyria High history to accomplish that feat. From the 75-61 victory over North Olmsted to open the season to the 76-56 victory over Marion to conclude the regular season, Elyria reigned supreme in win 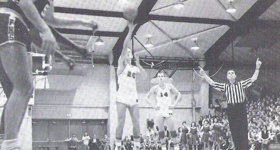 ning its second consecutive Buckeye Confererence championship. Through the 18 regular season games, only one team – Lorain – came within 10 points of the Pioneers, a 68-63 decision on Jan. 30. Elyria sailed through the sectional tournament, giving up only 98 points in the three wins and then routed Berea, 70-52, to open district play at Baldwin-Wallace. In the finals, Elyria faced Lorain and defeated the Steelmen, 68-66, for the third time – Lorain High’s only losses all year. Elyria, ranked second in the state, then met undefeated and defending state champion East Tech in the regional semi-finals – a game billed by many as the ‘real’ state championship. The Scarabs had one of the best teams ever assembled and defeated Elyria, 52-42. It was the closest anyone would come to 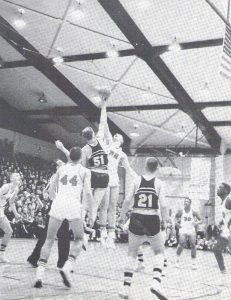 knocking off East Tech all year. On that team, there were many Hall-of-Famers, including Bill Mrukowski, who set a single game recored with 40 points against Berea early in the regular season. Walt Rock, Jim Jones, Sam Davis, Ritchie Poad, Larry Stark, Jim Guest, Lee Johnson, Steve Lengel and Bill Gast were other ESHOF enshrinees on that team. Rock led the team in scoring (393 points) and rebounding (326), averaging 16.4 points. Rock scored 31 points against Findlay for his high game. Davis was second in scoring with 344 points and Mrukowski finished with 343. The Pioneers averaged 70.5 points per game and gave up only 46.1. The 101 points scored against Fremont Ross (free throw by Tom Shepherd, right)  was a school record at the time. Amazingly, five Hall of Famers are on the floor for the tip-off vs. Lorain as shown. Mrukowski is number 44. Rock is jumping center. Gast is to the left and Jones and Davis are to the right.

Ray Wilson, an ESHOF inductee in 1977, founded Elyria’s ice hockey program in 1960. When Wilson passed away in 1970, Walt Kaczay stepped up to take over the program and was its primary manager, teacher and organizer at the Elyria North Rink for more than 25 years. Kaczay coached and schooled hundreds of Elyria’s youth hockey teams from the youngest of competitors right up to high school age. He passed away in 2011.