When Elyria Catholic opened the 1983 football season with three straight shut-outs, little did anyone know the Panthers were on their way to 26 straight victories and back-to-back state championships under Hall of Fame coach Jim Rattay.

In fact, the 1983 team allowed only 20 points all year in qualifying for the Division III playoffs as the top seed in Region 10. The Panthers, behind junior tailback Al McKinne 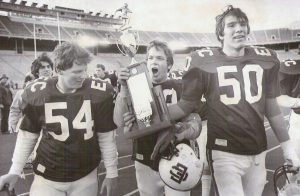 y, defeated Fostoria, 13-6, at George Daniel Field in Lorain to start their play-off run. They defeated Leavittsburg LaBrae, 12-0, at Baldwin-Wallace’s Finnie Stadium in Berea before coming from behind to defeat Urbana, 14-9, at the horseshoe at Ohio State. McKinney raced 69 yards for the winning score after EC had spotted Urbana a 9-0 lead. McKinney scored from two yards out in the second quarter to start EC’s comeback. Jim Molnar kicked the extra point after both touchdowns.

Tim Coy had a 95-yard interception return in the Fostoria game – the longest interception return in school history. Chico Smith picked off three passes in the Chanel game and Ron Traut returned a blocked field goal 97 yards against Lorain Southview – all EC records.
The Panthers rolled through the regular season, blanking Circleville, 14-0, Midview, 27-0, and Chanel, 47-0, to start the year. The Panthers then defeated Toledo Libbey, 34-6, before knocking off cross-town rival Elyria West, 56-7, to begin Erie Coast Conference play. Two more shut-outs followed – 31-0 over Holy Name and 42-0 over long-time nemesis Lorain Catholic. EC beat Padua, 39-7 before coming up with two more shut-outs – 34-0 over Mansfield Malabar and 55-0 over Lorain Southview. The Panthers entered the post-season having outscored their opponents, 379-20. Elyria Caholic had three All-Ohio players – McKinney, Bob Leshnak and Geoff Poyle.