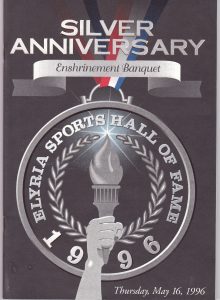 yria High and later at Eastern Michigan University. In the Mid-1970s, women’s track was just getting a foothold in area high schools when Betsy starred for the Pioneers. She was named Most Outstanding Female of the 1975 Lorain County Junior Olympics and later ran in the state track meet as part of Elyria High’s 880-medley relay team. Outside of school, in a summer meet, she won the 10K Elyria Distance Classic. Later in college, Riccardi set a school record in the 440 hurdles and the mile relay, qualifying for the national meet in the relay. While selected for enshrinement based on her athletic achievements, Riccardi could well have been chosen for her coaching as well. After coaching three years of high school track, she became the University of Toledo’s head women’s coach and cross country coach in 1984 – the first Elyrian to coach a Division I university track team. She then took charge of the women’s track program at Stanford University of the Pac Ten as main assistant head coach – helping the Cardinal to second place in the nation in the 1992 indoor meet and fourth place at the national outdoor. Prior to a maternity leave in 1994, she directed the Nike/Stanford Track and Field Invitational, the university’s biggest nationally televised event in history. She and her husband, Brooks Johnson – a former world track record holder and Olympic coach – have a son. Riccardi went on as a part-time assistant coach for her husband at California Poly at San Luis Obispo and currently lives in the Orlando, Florida area. 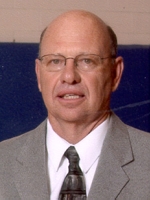 ch. It was in his genes. After all, Rob’s father, John Sheldon, was probably the best line and defensive coach in Elyria High football history and his uncle – Bob Jabbusch – was an Elyria High sports star in the 1940s. Both are members of the Elyria Sports Hall of Fame. But Rob didn’t receive enshrinement because of his father and uncle. He did it on his own as a great boys basketball coach at Wynford High School in Bucyrus for 28 years where he won 450 games and lost only 195, a nearly 70 percent winning percentage.  He was Crawford County’s Coach of the Year seven of the 10 seasons including five in a row. His team has won the North Central Conference championship nine times. Rob has led his team to 11 sectional titles, 5 district championships, and two regional titles leading to a pair of State Tournament appearances. Sheldon was so well-regarded statewide that he was elected president of the Ohio High School Basketball Coaches Association and was chosen to coach the Ohio All-Stars in July of 1996 in a four-state tournament with Indiana, Michigan, and Kentucky. In 1989, Sheldon coached Ohio in a game against Michigan’s All-Stars and in 1988, he coached in the Ohio All-Star game. No other Elyria grad has ever had so many coaching victories or gained such fame throughout the state for his coaching. At Elyria, Rob was the point guard for the Pioneers in the late 1960s, graduating in 1969 and going on to a fine career at Bluffton College, where he also was the school’s point guard. One of his six sons, David, became a star player in his own right at Bluffton.

Gary Stevenson is truly an American Sports figure. Stevenson is a self-made sports entrepreneur with ties to many professional athletes and organizations. From his athletic 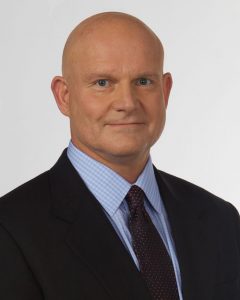 accomplishments at Elyria High to national prominence as a business agent for one-time Miami Dolphins and NFL Hall of Famer Dan Marino to being president of a national cable network, Stevenson has touched many people both individually and professionally. Stevenson’s first moment in the spotlight out of Elyria came on the floor of St. Johns Arena for the Pioneers in the 1973 Ohio High School State Basketball tournament. A starting guard on that outstanding team, it was Stevenson who became the central figure of a controversial play in the closing seconds of the semi-final contest against Cincinnati Elder. The Pioneer press had Elder on the ropes as Elyria made a furious comeback in the fourth quarter. On an inbound pass, with Elyria down by just a single point, an Elder player charged into Stevenson, who had position and was standing still. However, the referee pointed to Stevenson (see right) as he sat on the floor after being knocked over by the charging Elder player. The free throws ultimately clinched the victory for Elder, who won the state title the next night. It ended what many believe was Elyria’s best chance at winning a state championship. To this day, Elyria fans still talk about that fateful call. Following graduation from Elyria – where Stevenson also played quarterback for the football team – he earned a bachelor’s degree from Duke University and a master’s degree from George Washington University. After a brief career fighting forest fires in Oregon, Stevenson headed to Washington D.C. to work for a tax firm. That led to a job

with ProServe, one of America’s original sports marketing and management firms.

Eventually, Stevenson established his own company, with partners, called Advantage International, a sports company that not only managed athletes such as Marino but promoted such projects like the Kemper Open and Buick Open in golf. From there, he went on to a Professional Golf Association (PGA) as a top official which put him on the ground floor as president of the Golf Channel, a 24-hour cable network. He has worked for the NBA as well. He started OnSport in 1997 — a media company that promoted the PGA tour, NASCAR, and professional tennis. He was the former executive vice-president of the PGA in business affairs and later was the Chief Operating Officer for the launch of the Golf Channel. Stevenson also taught “The Business of Sport” at Duke University from 2000-2007. In 2010 he established a scholarship at Elyria High in honor of his parents — Dr. Robert and Eleanor Stevenson. Stevenson remains a member of the USGA Executive Committee and was named president of PAC-12 Enterprises in August, 2011 where he helped launch the conference’s network on August 15, 2012. In 2013, Stevenson was named president and managing director of Major League Soccer Business Ventures. 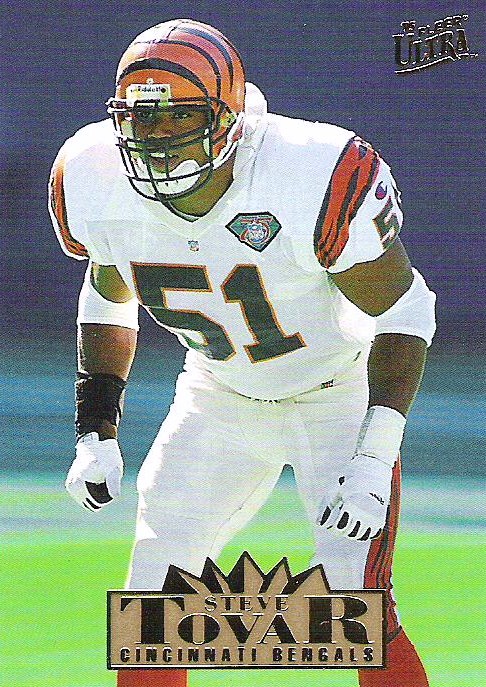 uestion about Steve Tovar’s enshrinement into the Elyria Sports Hall of Fame was not ‘if’ but ‘when’. Tovar is perhaps the greatest athlete produced by Elyria West High School. He was not just a player at West, Ohio State and the Cincinnati Bengals, but a star performer at all levels. With the Bengals in 1993 as a rookie (see right), Tovar led the team in tackles with 122. It all started at West where he not only dominated on the football field but on the hardwood of basketball as w

ell. Football drew the attention of scouts across the nation his senior year when he earned the Lorain County Golden Helmet award, the most prestigious football honor given out that is usually reserved for an offensive star. After graduation, Tovar was given a scholarship to Ohio State where he earned Kodak All-America honors as a senior for the Buckeyes as well as a three-time All-Big Ten selection (see cover of 1992 Michigan game). A lifetime Cleveland Browns fan, Tovar changed his allegiance once he was selected in the third round by the Bengals. Tovar played eight seasons in the NFL – six with Cincinnati. He also played for San Diego and Carolina. Currently, Steve is a special assistant with the football program at his alma mater Ohio State.

Elyria’s defensive unit (pictured above) — Ed Green (75), Mark Harvey (64), Chris Zaffer (53), Wayne Clemmons (71), James Plato (47), Colin Messaros (61), Jim Orwig (45), Tim Walsh (87), Mac Thomas (42), Robert Zvosec (33), Gary Beury (52)) gave the 1968 Pioneers football team its rightful place in the Elyria Sports Hall of Fame but the offense wasn’t too shabby either. Led by a great quarterback, a solid back-up signal caller and a backfield loaded with talented runners deep enough to field two teams, Elyria rolled to its second undefeated team in school history and a fourth place finish in the state polls – the only measuring stick for state champions at the time. The offense sputtered early in the year but adversity molded his unit into Hall of Fame greatness. Five defensive stands within the Red Zone – four within the 10-yard line – enabled the Pioneers to survive a potential early ambu

sh by Admiral King. Then, in the next game against Findlay, Elyria’s defense had four more defensive stands in a 13-2 victory. From there, the offense (Above) — Bill Couch (82), Tom Szabo (70), Eddie Elerson (62), Harold 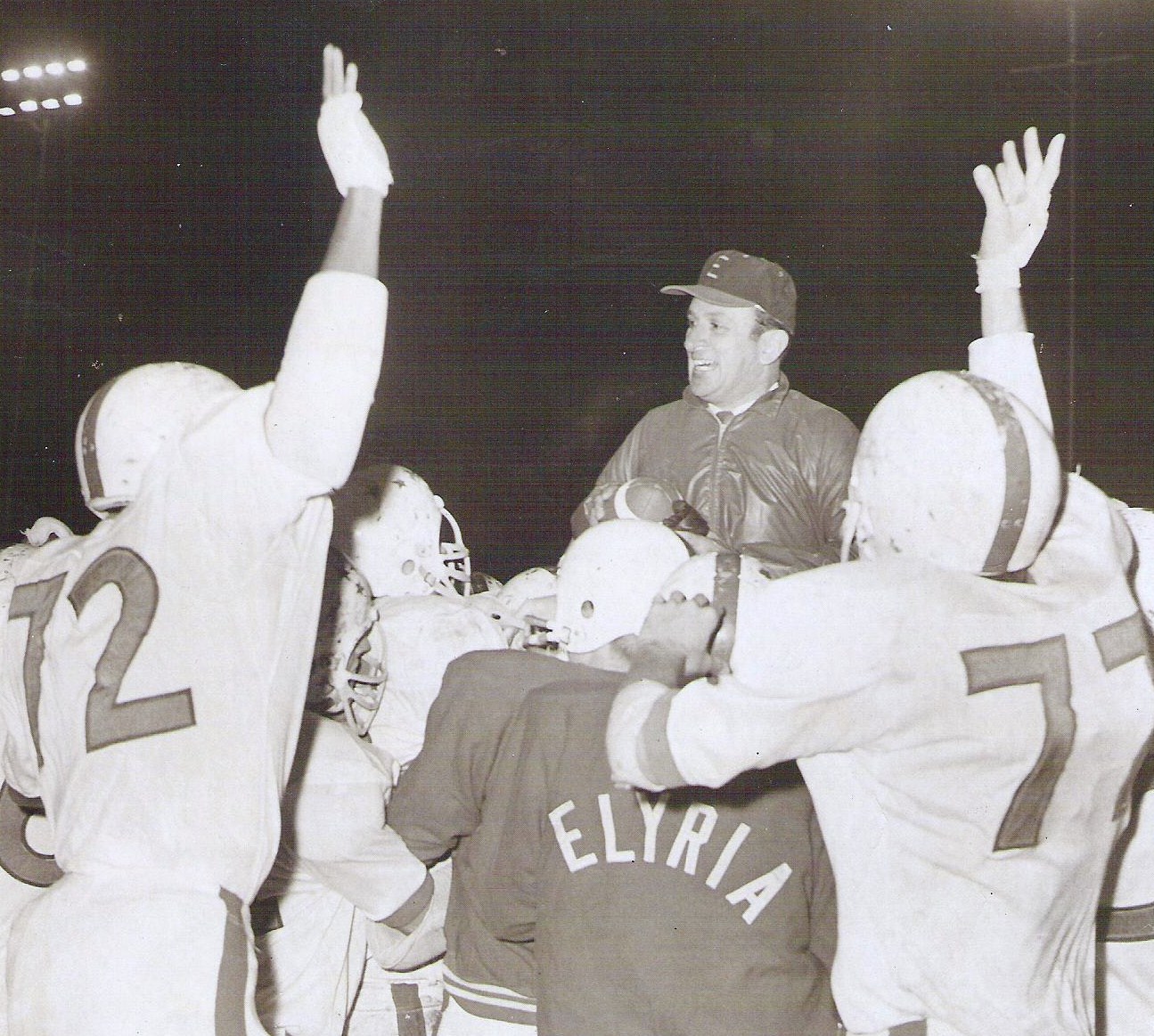 Kehler (50), Don Buttle (60), Neil Mitchell (77), LaRond Corn (80), Cliff Simonson (41), John Husband (35), Al VanValkenburg (11), Tony Godbolt (46)) found its gear and the Pioneers rolled to their first undefeated season in 21 years and set the tone for an amazing five year run where Elyria was 46-4 all under Bill Barton (shown below). Defensively, the Pioneers allowed only one team to score a touchdown. No team sustained a drive more than 33 yards. Opponents scored only 24 points all year – the lowest total allowed by EHS until the undefeated 1979 team. 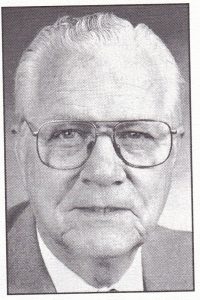 sed today by the Hall of Fame to come up with its nominations and eventual selection for the Hall of Fame. Murphy, now retired from the Chronicle Telegram as personnel director, also kept statistics for Elyria High’s football team for many seasons. He also wrote a column for the CT on Automobile Racing.  Murphy spent many years on the executive board of the ESHOF, serving as chairman in 1978. He was a member of the original Hall of Fame board in 1972.  Murphy was active in Little League baseball and covered motor sports at Lorain County Speedway for many years. He was also president of the Elyria High Pioneer Club in 1973 and 1974.