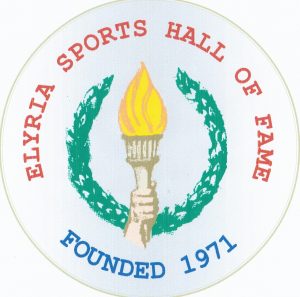 The Elyria Sports Hall of Fame is proud to announce our 2020-21 Class to be inducted into the Hall of Fame. Our banquet originally scheduled for May 2nd, 2020 at the Spitzer Center at Lorain County Community College has been postponed. Congratulations to this year’s class. Because of continuing concerns about the COVID virus, we may have to reschedule our banquet in August. Stay tuned.  Questions?  Email us at tgebhardt@elyriasportshalloffame.org .

ESHOF’s 2020-21 class is very diverse: two volleyball players, a softball player, a football player and a hockey coach and player are being inducted in this year’s class. Elyria Catholic’s first Miss Volleyball — Rebecca Yarish-Bowen and Elyria High’s Karlee Bruck will represent the sport of Volleyball. Aubrey OIiver, the All-Ohio pitcher on Elyria High’s 2002 State Champion Softball team joins the elite list of Hall of Famers. EC’s 1983 Golden Helmet Winner — Brian Schneider — will be honored along with Elyria High hockey player and Elyria Catholic hockey coach Dave Phiel will be honored. We will also induct the 2003 Open Door Basketball team who qualified as the school’s only final four participant in the state tournament.  Steve Kirsh, a former chairman of the ESHOF will receive our Distinguished Service Award for his 32 years of faithful service as Elyria Catholic’s scoreboard operator for both football and basketball. Congratulations to the Class of 2020. We will also award $500 scholarships to four outstanding student/athletes from the area schools — Elyria High, Elyria Catholic and Open Door and honor our All-Ohio athletes from this past year. Won’t you join us at this year’s banquet?

Elyria High’s excellence in volleyball continued with the play of Karlee Bruck, a 2007 EHS graduate.  She graduated from Elyria High as the school’s all-time solo blocks leader with 210 over her career. The team, coached by Hall of Famer Carol Russo, was 71-9 in her three years on the varsity. Karlee earned a scholarship to the University of Michigan where she lettered all four years. She is currently the coach at Rocky River High School. 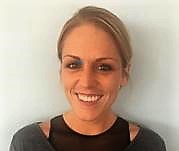 Elyria High’s 2002 softball team broke through to win the school’s first state championship with Aubrey Oliver in the circle for the Pioneers. Oliver was 18-2 as a junior with a 0.28 ERA and followed that up with a 23-2 record and a 0.69 ERA during her senior season capped by the state championship. The team, coached by Hall of Famer Ken Fenik, was previously inducted into the ESHOF in 2015.  Oliver struck out 215 hitters in 151 innings in 2001 and followed that up with 218 Ks in 163 innings during the championship season.

A 1975 graduate of Elyria High, Dave Phiel made his impact felt at both EHS 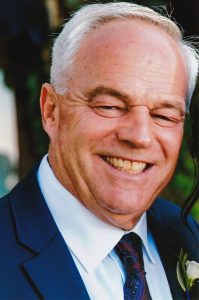 and EC. At Elyria, he led the Flyers in scoring three straight years, earning an eventual scholarship to Bowling Green. Phiel was the Flyer’s MVP. He also played one season in Canada in the junior program. After graduation from BG, Phiel helped found the Elyria Catholic hockey program as the school’s first coach from 1994 through 2010. The Panthers were three time district champions under his tutelage and he was named as the league Coach of the Year three times. 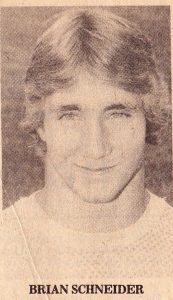 1984)  was led by Lorain County’s Golden Helmet winner — Brian Schneider in 1983. Schneider was part of the two-headed monster backfield for the Panthers in 1983. Both he and Al McKinney rushed for over 1,000 yards during the undefeated state championship season, capped by a 14-9 win over Urbana in the title game at Columbus. Schneider was named Lorain County’s MVP as an offensive back in 1983. He was the leading scorer in the Erie Coast Conference both his junior and senior seasons. He also played basketball and baseball for EC. 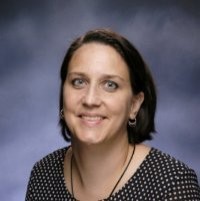 Rebecca Yarish was Elyria Catholic’s first Miss Volleyball in 1987, her senior season with the Panthers. She was EC’s Gilgenbach Award Winner in 1988 as Elyria Catholic’s outstanding female athlete. Yarish earned a scholarship to Kent State where she excelled on the court and in the classroom for the Flashes. She was named to ESPN’s Academic All-American team in 1990 and was named to the Mid-American Conference All-Academic team both in 1989 and 1990. She was a four-year letter-winner for Kent State and finished in the top five in six career categories. She also ranked in the top five in six individual game stats at Kent. She held the school’s record for kills upon graduation. It was the first time the City of Elyria celebrated a Final Four team in basketball in 26 years when Open Door stunned the D-IV field at the regional tournament by beating favored Sebring-McKinley, 43-42. Led by Tori Davis, the Patriots finished the season 20-6. Al Januzzi was Open Door’s coach in 2003. Other members of the team were Tony Madolone, Brett Schmidt, Mike Asbury, Jason Piper, Adam Freeman, Jared Herron, Aaron Freeman, Steven Miller, Matt Galati and Gene Mason. David Freeman and Lee Schmidt assisted Januzzi. The school qualified for the state tournament in spite of having only 61 boys enrolled in the school.

Since 1991, the Elyria Sports Hall of Fame has honored those individuals with the Distinguished Service Award for being active in the community in 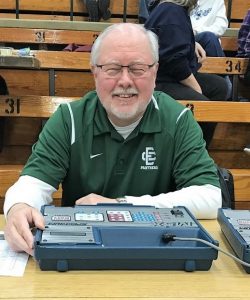 a variety of ways. For 32 years, Steve Kirsh has been a dependable and reliable force behind both the Elyria Catholic football and basketball programs as the scoreboard operator. Kirsh was also a past ESHOF chairman in 2006 and has served on the board for many years..

Taylor Mehl (Elyria), Emilie Uhnak (EC), James Steindl (EC) and Lauren Sweitzer (Elyria) were our scholarship winners for 2021. Congratulations and good luck on your college endeavors. Seniors should apply for the scholarship to be awarded at our next banquet. Fill out the application under the menu for scholarships.