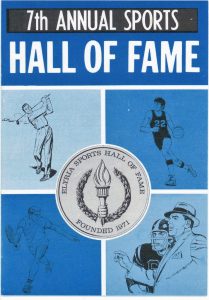 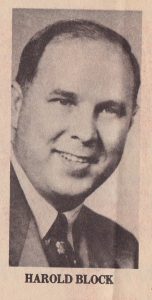 A player, a coach, an official – Harold Block did it all until his untimely death in 1970. He was a standout in baseball, basketball and football at Elyria High from 1928-31 and was acknowledged as Findlay College’s No. 1 athlete. He could have played professional baseball but opted instead for a career in education, coaching, and officiating. Block coached for 20 years at the prep level, guiding Elyria High to sectional and district championships in basketball and tutoring such greats as Vic Janowicz and Tony Curcillo as an assistant football coach. He also officiated for 20 years, heading a five-man crew that handled Buckeye Conference and Ohio Conference football games.

Gerald “Gerry” Gaines was king of two courts – tennis and basketball – in his youth growing up in Oberlin. Gaines had no peer during his celebrated career at Oberlin High School. He was 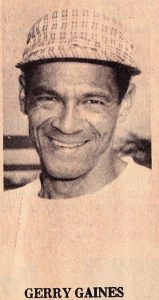 instrumental in Oberlin’s 1926 Class B state basketball championship. Oberlin made the state finals four years in a row starting in 1924 and Gaines was a member of three of those teams and was selected to the all-tournament team all three years and was the leading scorer in two of them – missing by just two points of making it three. He was the first to be named to three straight All-State teams, a feat not accomplished again until Jerry Lucas came along in the 1950s. His cage success continued with Republic Steel’s “Steel and Tubes” team that won the industrial and city league titles in 1930. “Steel and Tubes” made it all the way to the YMCA state finals before losing.  But Gaines gained his greatest notoriety in Elyria on the tennis court. He won two city singles championships in 1948 and 49 and a string of six straight doubles crowns (1948-1953). He combined for two more doubles championships in 1963 and 1970. He won the Lorain County singles titles in 1953 and the 1974 Lorain County Sesquicentennial doubles crown. He also played football and ran track at Oberlin and once long-jumped 22-feet – still considered a tremendous feat to this day. After retiring from Republic Steel, Gaines became the assistant tennis pro at Sugarlane Racquet Club.

Consistency marked the golf exploits of James Ross, one of the greatest all-time amateur golfers ever to play the game. Ross won more than 35 golf championships and finished runner-up in a dozen others. He was a standout on Ohio State’s University golf team. Ross began his golf career as a 15-year old – winning two straight Elyria Country Club Caddie titles and two straight

Cleveland District Golf Association Caddie Championships in 1951 and 52. As a sophomore at OSU, he finished second in the Ohio Intercollegiate Tournament. He won the first of two ‘Varsity O’s’ as a Buckeye. In 1967 and 1972, Ross won qualifying rounds in sectional competition for the U.S. Open.  Ross was the first Elyrian to win the Cleveland District Golf Association 72-hole event in 1967. He was Oberlin Golf Club champion six times and runner-up three. He was also a champion golfer at the Oak Hill Country Club. Ross has also won the Lorain Invitational, the Lorain County Amateur twice, the first-ever Lorain County District Tournament Champion of Champions and countless best-ball tournaments. He managed to win all those championships and titles in spite of his full-time duties as a Certified Public Accountant that prevented him from going down south to ‘work on his game’ in the winter months.

For better than 50 years, Lou Rotunda has been known by many simply as “Mr. Elyria Catholic”.  He is the founder and sponsor of the 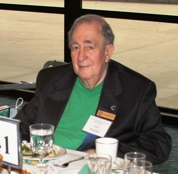 annual Lou Rotunda Award given to the school’s outstanding scholar-athlete. It remains the most coveted award at EC. Rotunda coached the freshmen basketball team for 40 years, compiling a record of 419-223. He had only four losing seasons. He was also the assistant Athletic Director for 30 years. Rotunda was equally 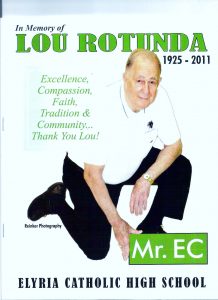 important to the CYO program in Elyria. He started and coached the St. Mary grade school football team for eight years. He headed the CYO basketball program for 10 years and is a past president of Senior CYO. Rotunda is a member of the Lorain County Basketball Coaches Hall of Fame (Class of 1994) and was inducted into the Elyria High School Distinguished Alumni Hall of Fame in 2000. He received an honorary Elyria Catholic diploma in 2001. For his unselfish devotion to the youth of Elyria, he was awarded the first Eagle of the Cross. Rotunda continued to serve the young people of Elyria Catholic and the city of Elyria through 2011 and was always willing to lend an ear or to give advice when it is sought. He rarely missed an athletic function at Elyria Catholic. Rotunda continued to serve as a trustee for the Elyria Sports Hall of Fame up until his death in August, 2011.

John Sheldon and Elyria High Football are practically one in the same. From the first day he put on an Elyria High uniform in 1938 until his retirement as an assistant coach in 1975, She

ldon had football flowing through his veins. As a student, Sheldon was a three-year starter for the Red Raiders – as Elyria High was known in those days. After a stint in the service for World War II, Sheldon entered Bowling Green State University where he earned three letters and played on the undefeated 1948 Falcon team. But it was in coaching that Sheldon became synonymous with Elyria High football. He joined the varsity staff as a line coach in 1950 and for two and a half decades produced some of the top lineman in the school’s history. He was intense, demanding and thorough. “I’m a holler type of guy,” he once said. “I used to get right down there to show them what they were doing wrong.” The ‘highs’ of coaching came on game nights, but Sheldon’s enjoyment of his work extended to daily practices. “After (the game) was over, whether you won or lost, that was the climax,” Sheldon said. “But I enjoyed every minute of it, working day-in and day-out on the practice field.” Sheldon’s influence continued in the classroom where he taught math, physical education, and directed Elyria’s premier Industrial Arts program. Right up until his death in 2009, Sheldon continued to support the Pioneer football team.