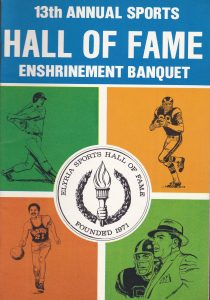 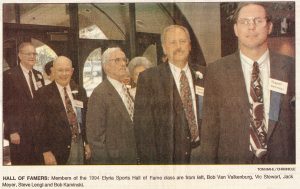 Determination and the will to battle through injuries distinguished the multi-sport career of Ken Burley. Beginning with his basketball days at St. Mary’s grade school in Elyria in 1926 and 27 and continuing into his adult life in baseball, Burley always managed to get the most out of his abilities. At St. Mary, his team lost the 1926 championship by a single point but managed to win the title the next year. At Elyria High, Burley played 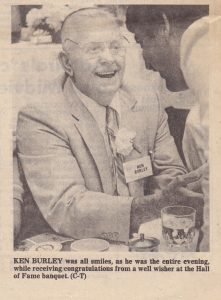 basketball, baseball and football. In spite of suffering a broken arm in the first football scrimmag

e in 1929, he returned to the gridiron to earn a letter. Later that same year, he won letters in lightweight basketball and baseball, where he batted .358 as the team’s third baseman. In 1930 and 31 he again played all three sports, earning letters in all three. In 1930, he was hitting .425 before suffering injuries to both ankles in one game. Despite that, he returned later that same year and wound up hitting .392. Elyria won the district title that season. He had the distinction of playing the first night game at Ely Stadium – a first in Lorain County history (see right). He played both center and quarterback – proving once again what a versatile player he was. He was the team’s punter – averaging 51 yards a kick in eight attempts. Burley received many offers to continue playing in college. Ohio State, Georgia Tech, Ohio Northern, Dayton, Blufton, Toledo and Findlay all made offers to Burley, who finally chose Findlay. He played all three sports his freshman year and lettered in football and baseball as a sophomore but was forced to quit school to help his family during the depression. Burley played American Legion baseball under Jack Ambrose and played in a number of Sunday baseball leagues as an adult.

The phrase ‘student-athlete’ wasn’t in vogue back in the 1950s, but it describes Jim Jones perfectly. 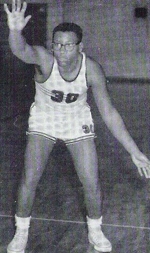 Not only was Jones an outstanding three-sport athlete at Elyria High School and Oberlin College but he excelled in the classroom as well. At Elyria High from 1955 through 1959, Jones was an All-Buckeye Conference first team linebacker who was named by the Elyria Lions Club as the Outstanding Defensive Back. He won the prestigious DECA Award signifying the top spring sports senior athlete as a member of the Buckeye Conference team champion and state tournament appearance in golf. Jones played on 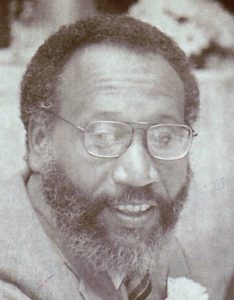 three straight sectional and district basketball champions and two straight Buckeye Conference basketball champions under Dale Reichenbach. He was a top hitter for his little league baseball team and won the Elyria Junior Chamber of Commerce Golf Tournament one summer. Off the field of play, Jones was president and a member of student council, a member of Youth Council, a National Honor Society member and participated in A Capella Choir, Varsity E, French Club and Math Club. He received the four-year Glen Gray Scholarship for both his athletic and academic excellence to attend Oberlin College. Jones played basketball, football, and baseball and also was a member of the golf team for the Yeomen. By his senior year, Jones concentrated on basketball only where he led Oberlin to a strong showing in the Ohio Conference race. Upon graduation, Jones continued his excellence in the classroom – receiving a masters degree at Temple University and his doctorate from Yale. At one time, Jones was the assistant professor and associate professor of social psychology at Harvard and staff director of the National Institute for Advanced Studies in Washington, D.C. He later became director of the Minority Fellowship Program at the American Psychological Association in Washington and a professor in the psychology department at the University of Delaware. Jones authored the college textbook entitled “Prejudice and Racism,” as well as numerous articles in various publications and journals.

As well-rounded as anyone in the Elyria Sports Hall of Fame, Felix Klimczak was an athlete, a coach, and an official – dedicating his life to sports. Klimczak e

xcelled in basketball, baseball and tennis during his high school and college athletic days. He also participated on many softball teams in the area. At the conclusion of his playing days, Klimczak remained in sports coaching and officiating. As a youngster, Klimczak played sandlot baseball, basketball and softball before starring at 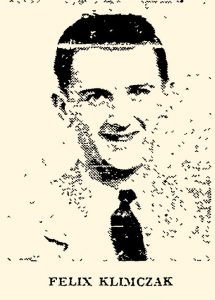 Elyria High in basketball and baseball in 1944 and 45. He captained the basketball team and was named All-Lake Erie League as a guard leading the Pioneers to a spot in the regional championship game – the farthest the school went down the tourney trail in 10 years. His pitching ability in baseball was so great the Brooklyn Dodgers offered him a try-out. Klimczak passed up that opportunity for a basketball scholarship to Bowling Green. He played both basketball and baseball for the Falcons in 1945 and 46 before transferring to Dakota Wesleyan University. He played both basketball and tennis at Dakota Wesleyan where he and his partner won the doubles championship of the Dakota-Iowa collegiate tennis tournament. Klimczak later played semi-pro baseball in South Dakota and he played on basketball teams that played in both Madison Square Garden in New York and the Boston Gardens. Upon returning to Elyria, he played on numerous softball and baseball teams in independent competition – winning a batting title one year. Klimczak shared his knowledge of the game by becoming Elyria Catholic’s basketball coach. He also officiated in basketball, baseball and softball. 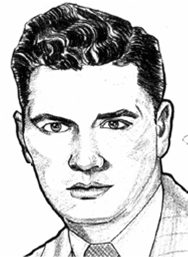 The name Morris was well-known to Elyria sports fans in the early 1950s. Donald and his brother Byron are both members of the Elyria Sports Hall of Fame because of their accomplishments on many fields of battle. Donald Morris played football, basketball and baseball and went on to the College of Wooster to continue his athletic prowess. Morris played three sports at Elyria High but it may have been on the football field where he was best known. In 1952, as captain of the football team, Morris led Elyria to the Lake Erie League Championship – the last one Elyria would win before leaving the LEL for the Buckeye Conference. He was the center on that team and was named All-LEL as well as being named among the top players on the wire service All-Ohio squads. He was the starting center in the prestigious North-South All-Star game. He also played four years on the Pioneers basketball and baseball teams as well as the Post 12 baseball team where he was the catcher and battery mate for his pitching brother Byron. At Wooster, Morris played both baseball and football for the Scots for four years. He was moved to tackle from his center position and continued to catch for his brother Byron on the baseball team. He and his brother were battery mates for three years at Elyria High and three more at Wooster. 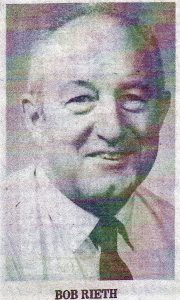 won the state title, his 1959 team finished runnerup. Fourteen of his teams won at least 20 games in a season and his 1968 squad won 33 times. After giving up the head coaching reigns, Reith continued as an assistant to Chuck Mason before retiring in 1982 after that team competed in the state tournament. Managing and coaching was only part of Reith’s story. He was the team’s publicist, schedule-maker, it’s spokesman at league and district meetings and the banquet coordinator. He ran tryout camps for the team every spring and summer. When the American Legion baseball team needed something done, Reith was there.