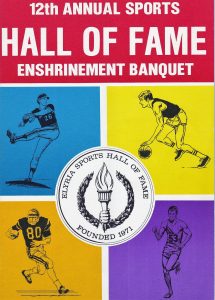 You had to see Fred Balser play the game of basketball to really get an understanding of his contribution to Elyria High’s outstanding 1974-75 season. It’s not that Balser was the first player to give 100 percent for his team; it’s that he had more to give than most. He 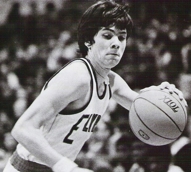 was the head and heart – a leader and battler – for a championship team at Elyria High and he went on to accomplish the same for the College of Wooster for four years. His achievements stemmed from his desire to excel rather than his physical gifts. He made himself into a basketball player and what a basketball player he was! In 1975, he led the Pioneers to a 22-2 season, winning the first of a record four straight 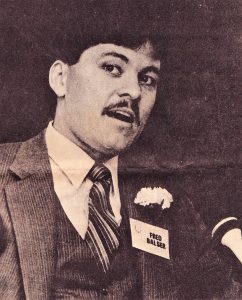 Buckeye Conference titles. Elyria went on to sectional and district crowns before losing a controversial regional final to Cleveland Heights. Elyria had played a three overtime marathon against Toledo Macomber to get to the regional finals late Saturday night but was forced to play Heights on a Sunday afternoon. It was later discovered that was a violation of OHSAA rules.  Balser was named first team All-Ohio, Player of the Year in the Northeast Ohio district, All-Buckeye Conference, and the first winner of the Lorain County Mr. Basketball Award. He starred in the state All-Star game and was named the Most Valuable Player in the first game of a Coliseum Classic doubleheader featuring many of the Cleveland area stars. Balser, 6-foot-2, was the team’s leading scorer (388 points, 16.1 Ave.) and one of the leaders in assists (90) and rebounds (146). He set a then school record by sinking 17 baskets in a win over Medina and was the team leader on defense. Balser was never far away from a loose ball. In his last three years at Wooster, the Scots won 20 or more games. He boosted his scoring average from 11.5 as a sophomore to a team-leading 17.5 as a senior. He was the team’s Most Valuable Player his junior and senior year and an All-Conference selection as a senior. Balser’s career ended by a broken ankle – typically for Balser – diving for a loose ball with 35 seconds remaining in a game already sewed up. The Wooster Daily Record honored him with an editorial entitled ‘Thank You, Freddie Balser’.

mediately when you hear someone called ‘Tuffy’, you have to wonder how such a nickname came about. Ralph “Tuffy” Bauer picked up that name in grade school and the name stuck with him through his adult life. His older brothers nicknamed him ‘Tuffy’ for the way he bulled his way into games they were playing with older friends. He needed this toughness 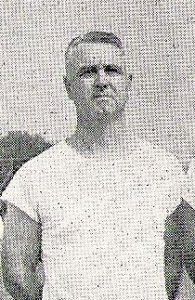 growing up – he was stricken with typhoid at age 13 and his older brother had died from a head injury in a basketball game. In spite of the odds – his mother didn’t want him to compete in sports – Bauer, with his father’s blessing, captained both the football and basketball teams at his alma mater in Springfield, Ohio. His career continued at Wittenberg University where he captained the basketball team in 1927-28. He graduated from Wittenberg in 1928 and received his masters degree from Columbia University in 1933. After a coaching stint at both New Philadelphia and Newcomerstown, Bauer came to Elyria High as head basketball coach from 1937-41 – coaching fellow ESHOF’s Lank Coven. He served in World War II from 1942-46 and returned to Elyria as an assistant for the legendary 1947 football team. He also coached the basketball team three more years. 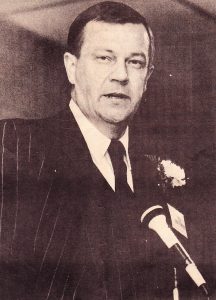 rth of the ‘golden era’ of Elyria High Sports in the 1950s may have begun with a gangly sophomore named Theodore “Ted” Gottfried. Gottfried was a two-sport star at Elyria and his accomplishments are still remembered to this day. Gottfried played basketball on one of Dale Reichenbach’s first teams – scoring a then career record 1,109 points that lasted to the 1977 season when Richard Montague burst on the scene. His performance on the basketball floor opened the door for the glory years as Elyria started a string of eight straight district championships – unprecedented even through today. His 471 single season scoring in 1956-57 remains among the best in school history. His underhand free throw style – similar to then NBA star Wilt Chamberlain – was very accurate (see right). He set the school record for single game scoring with 33 points against Wellington in a tournament game his sophomore year and scored 30 or more two other times in his career. On the football field, Gottfried was an accomplished end for Bill Barton. In 1957, he hooked up with quarterback Dick Novak and then lateraled to Brian Hays for a 77-yard touchdown to help tie Marion, a state power at the time, 20-20. That pass play remains one of the longest in EHS history. Gottfried went on to Brown University and he also played for the Goodyears Professional team in Europe. 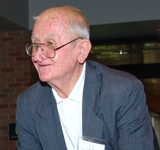 all diamond for over five decades. Pavlenda was instrumental in organizing Little League East in 1951 and in 1977 Pavlenda helped

form the first-ever team to represent Elyria Catholic – a program that has since had much success. Just two years after starting the baseball program at EC, the Panthers became the first Elyria school to reach the state tournament – losing in the semi-finals by just 5-4 to the eventual state champ. In 1960, Pavlenda coached an East team all the way to the state tournament – finishing runnerup – the highest East finish to that date. In 1968, Pavlenda went to the west side of town and again took his team to the state finals. He later managed a pair of Big League teams to back-to-back state titles in 1975 and 76. In addition to his coaching, Pavlenda umpired for better than 30 years in Little League, Big Leagues and high school baseball games. He also officiated junior high and junior varsity basketball games for many years. Andy passed away in August, 2012.

Mark Straka personified the student-athlete model during his days at both Elyria Catholic and Ohio State University (left). He maintained skill on the playing field and competence in the classroom 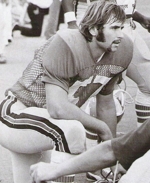 to excel in both areas. Straka was a 3-sport standout for the Pan 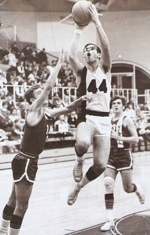 thers in the late 1960s, earning all-conference honors in both football and basketball. He also competed in the weight events on the treack and field team. Straka caught a record 63 passes for 858 yards in his three years as a Panther end. He was an all-conference chce two years and was selected to play in the prestigious North-South All-Star game. He was honorable mention all-state. In basketball, Straka was the Most Valuable Player in the North Central Conference his senior year and was all-conference twice. He was a 3rd team all-state selection averaging 16.5 points a game as a junior and 23.3 as a senior. In track, Straka was the conference discus champion his senior season. For his athletic prowess, Straka was one of the recipients of the Knute Rockne Award, presented by the Notre Dame Club of Cleveland. He also received an award from the Cleveland Touchdown Club and won the Lou Rotunda Award. In the classroom, Straka graduated seventh in a class of 222 – maintaining a 4.0 average. He was president of his class, a member of the National Honor Society and was named an Outstanding Teenager. At Ohio State, Straka played three years for Woody Hayes, starting as a tight end and converting to center in 1973. He was the first Elyria Catholic grad to participate in the Rose Bowl. Straka received his bachelor of science degree and enrolled in the school’s College of Dentistry program. He is an oral surgeon in the Columbus area.