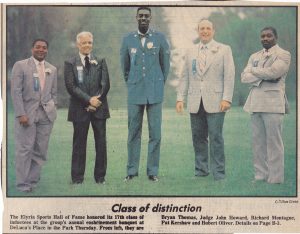 Judge John Howard was a true ‘Pioneer’ during his athletic days. Not only did he excel in athletics as an Elyria High Pioneer but he became the first black athlete from Elyria to make major accomplishments at the collegiate level at Florida A&M. Howard participated in football, basketball and track at Elyria from 1937-41 and at Florida A&M from 1941-45. His favorite sports were football and basketball. At Elyria, he was the first black captain of a major sport. He was named to the All-Lake Erie basketball team and was said to be “the outstanding player of the league” by one of the coaches even though two other first teamers 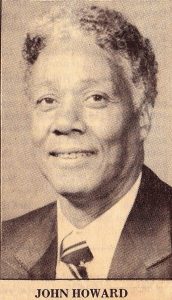 were named to the All-State team. Howard led the team in scoring his senior year and earned six varsity letters – a record at that time. In football – in spite of being the smallest starter on the team — Howard was a stalwart performer on both sides of the ball – at fullback and end. In track and field, Howard captured the district high jump championship and was the only Elyria High athlete to participate in the state tournament in Columbus. In college, Howard led A&M to a Southern Conference title and a national Black Championship as a sophomore running back and safety. He also returned punts. As a senior quarterback, Howard was named captain fo the squad and was named to the all-league team and All-American. His 85-yard run gave A&M a victory in the Orange Blossom Classic against Tennessee State in 1944. In basketball, he helped the team win a league championship as a freshman and captained the team his junior and senior years. His team won the league tournament and Howard led the team in scoring – leading his team to a record team scoring season. After his playing days, Howard enrolled at Ohio State and earned his Law Degree from Capital University in 1949. He is a retired municipal judge. He passed away in 2002.

Pat Kershaw brought recognition to the position of football lineman – normally in the publicity shadows. After starring as an All-Buckeye Conference offensive tackle at Elyria High in 1967 and 68, Kershaw went on to a starting spot on a Big Ten team – Northwestern. Kershaw teamed with fellow Hall-of-Famer and Pioneer – Al Robinson – at Northwestern. For the Wildcats, Kershaw achieved fame as a defensive tackle his junior and senior years in spite of being one of the smallest starting lineman in the Big Ten. Kershaw weighed in at 218 pounds his junior year and 225 as a sen 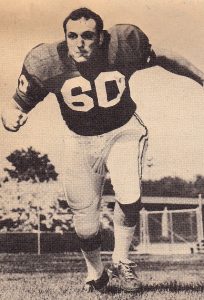 ior. At Elyria, Kershaw made the varsity as a sophomore – one of only a handful to do so during the Bill Barton era.

It was an omen of greatness ahead. In addition to his offensive duties, Kershaw saw action on the defensive line as a sophomore. Barton called Kershaw “a real football player and an all-around athlete. If I only had a whole squad of Kershaws.” Kershaw was also an outstanding wrestler at Elyria, finishing fifth at State in the heavyweight division where he spotted weight to almost every opponent. At Northwestern, Kershaw began as an offensive lineman his freshman year, then switched to defense his sophomore season. Though he saw limited action, he impressed coach Alex Agase enough to earn a starting spot for the final six games his junior year. He continued as a Wildcats’ starter his senior year. Though Northwestern had a losing reputation in the Big Ten, during Kershaw’s and Robinson’s years, the Wildcats were no pushover – finishing 7-3 in 1971, second only to Michigan in the standings. Northwestern defeated Ohio State (see Kershaw No. 60) at the Horseshoe. After graduation from Northwestern, Kershaw was an assistant coach at Kent State and Elyria High and managed the Elyria Fitness and Raquet Club. 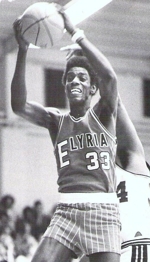 of Elyria High School. Montague, who grew to 6-foot-9 by the time he graduated from EHS, dominated the local basketball scene and helped Elyria maintain its reputation at the time as a state-wide power. Montague set numerous records at Elyria – many still standing. He held the career scoring mark of 1,109 points and single season mark of 516 until Brett Larrick broke both records. Montague still holds the single-season field goal percentage record. During his three-year starting stint, Elyria was 64-7 and won three Buckeye Conference titles, two district championships and one regional title. He was named All-Ohio by both wire services – the first Elyria High basketball player to accomplish that feat. Twice he was named Buckeye Conference Most Valuable Player and twice he was named to the All-Northeastern Ohio District team. He won the Mr. Basketball award – recognized as the finest player in Lorain County. Montague went on to play at Dayton University – starting his final three seasons and scoring 1,093 points in his Flyers career. He led Dayton in scoring, rebounding, and blocked shots all three years as a starter. The Flyers participated in the NIT his freshman, sophomore and senior seasons. Montague went on to play professionally in Europe.

has anyone made the impact on the local and national sports scene that Hubert Oliver did on the football field. Oliver is just one of a handful of Elyria natives to play professionally in football. Oliver was a two-sport

standout at Elyria High – helping lead the Pioneers to an undefeated regular season and a state semi-final berth at St. John Arena in Columbus. Oliver, along with fellow hall-of-famer Richard Montague, completed a memorable season. Oliver shot 43 percent from the field, averaged 14.3 points a game, hauled in 88 rebounds from his guard position, and handed out 52 assists. On the football field, Oliver rushed for 406 yards on just 69 carries – a 5.9 yards per carry average. He shared the team scoring lead with 70 points on 11 touchdowns and four extra points. He caught eight passes for 189 yards and tied for the Buckeye Conference lead in interceptions with four. Oliver went on to star at Arizona University – becoming the second leading career rusher at that time. As a junior, Oliver gained 1,021 yards in 197 attempts – finishing third in the PAC-10 in 1979 behind only Charles White of Southern Cal and Freeman McNeil of UCLA. Oliver went on to the Philadelphia Eagles where he gained 1,029 yards in a four-year career. He was better known as an outstanding blocker for the Eagles. Oliver currently is employed by the City of Elyria in the maintenance department for the city’s cemetarys.

Talk about Elyria Catholic football and Bryan Thomas’ name is right at the top of the list. Thomas was the spark – the catalyst – for one of the area’s sports dynasties. A

s a junior, his outstanding running at tailback led the Panthers to the 1976 state football ch 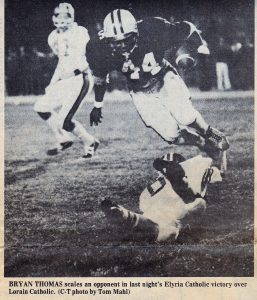 ampionship and started EC on an outstanding nine-year run where EC lost only seven times and won two other state championships. It was against Brookville in the 1976 state title game that Thomas may have had his finest effort. Thomas ran for 287 yards as the Panthers won, 34-10. He set several state tournament records including the longest kick off return of 95 yards. Thomas’ rushing mark (287 yards) and touchdowns scored (3) were also record setting standards at the time. As a senior, Thomas led the Panthers to the brink of another state crown only to be denied by Cincinnati Wyoming in the title game. Thomas rushed for 2,044 yards in 12 games and in the title game he set a record for the longest fumble returned. He was Ohio’s Class AA back of the year and won the Golden Helmet award. He was the MVP of the county and the Erie Shore Conference. At the University of Pittsburgh, injuries hampered his career, but he did rush for 1.003 yards as a junior, becoming only the third Panther to eclipse 1,000 yards. He outgained Georgia’s Herschel Walker in the Sugar Bowl where Pitt came up with an upset victory. He rushed for 217 yards against Florida State. As a senior, he had a 100-yard game against Penn State, and became the third leading career rusher for Pitt. Pitt played in the Cotton Bowl game. Thomas was drafted by the Green Bay Packers of the NFL but was cut. He later played in the USFL at both Philadelphia and Baltimore – playing on two championship teams.