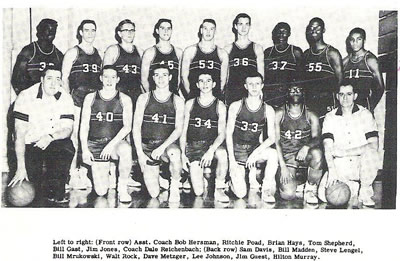 Legendary head coach Dale Reichenbach had many outstanding basketball teams at Elyria High but without question, the best had to be his 1958-59 team. Counting Reichenbach and his assistant coach Bob Hersman, there are 12 representatives all enshrined in the Elyria Sports Hall of Fame. Reichenbach w 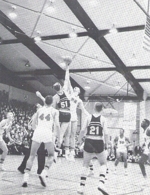 as a defensive guru and Elyria’s opponents were held to just 46.1 points per game that season while the Pioneers racked up an average of 70.5. Elyria handed a very talented Lorain squad (see jump ball picture left) its only three losses of the season including a 68-66 cliffhanger at the Baldwin-Wallace district championship. Bill Mrukowski set the single-game scoring record with 40 points at Berea early in the season and the team was led in scoring and rebounding by Walter Rock, who later was an All-Pro lineman in the NFL. The usual five starters (all in jump ball picture) were Rock (52), Mrukowski (44), Sam Davis (at right), Jim Jones (30) and Billy Gast (left) but Reichenbach could call on a number of his substitutes to play well. The Pioneers won every game during the regular season to win the pretigious Buckeye Conference championship for the second year in a row. In the “Sweet Sixteen” for the third straight year, Elyria was matched up with defending and undeafeated Cleveland East Tech in the regional semi-final at Baldwin Wallace. In front of a standing room only crowd, East Tech prevailed 52-42. It was the closest margin of victory for the eventual state champions and its lowest point output of the season. Reichenbach, Hersman, Rock, Mrukowski, Davis, Jones, Gast, Larry Stark (tennis), Richie Poad (football), Lee Johnson (basketball), Steve Lengel (football and basketball) and Jim Guest (tennis) are all enshrined in the Elyria Sports Hall of Fame for various talents. Some called the Class of ’59 the greatest assembly of athletes in Elyria High’s illustrious history. Few could argue.