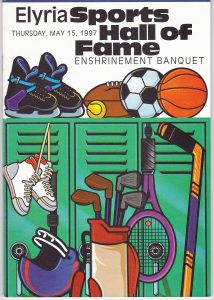 Elyria his home town. He is Steve Bankson who eclipsed Ray Watts’ record 246 victories for the Yellow Jackets in 1998. Bankson passed the 300-victory plateau in 2001 and eclipsed 600 during the 2002-03 season. In 2004-05 Bankson’s team won the OAC post-season tournament and wound up 20-9 overall. Bankson is a 1963 graduate of Graceland (Iowa) College and received his master’s degree from Indiana University in 1964. From 1964-68, Bankson coached high school basketball in Indiana and at Port Huron, Michigan, compiling a 49-24 mark at that level. He then joined the staff at Lorain County Community College and stayed 12 years, guiding the Commodores into the national junior college spotlight. Bankson’s record at LCCC was 232-90 and included 10 trips to regional competition. At B-W, Bankson’s first squad in 1980 compiled a 22-6 mark – an outstanding .786 winning percentage that remains the best in B-W history. Bankson retired in the spring of 2008 as the winningest basketball coach in school history, the second winningest men’s basketball coach in the state of Ohio and the third winningest in Ohio Athletic Conference history with 701 victories overall during his 44-year coaching career. At B-W, Bankson compiled a 420-328 record with five OAC titles and five NCAA Division III postseason appearances. An amazing 83 of the 85 four-year players earned their degrees under Bankson.  As the athletic director at the College, Bankson helped the B-W men to capture the 1989-90 OAC All-Sports Trophy and worked to ensure that each team was funded, equipped and given the opportunity to be successful. In 2008, Bankson was inducted into the Ohio Basketball Hall of Fame. His 652 victories at the college level is the most credited to any coach in Ohio history.

Mary Ann (Kobb) Herrick started playing tennis at the tender age of 11 and soon became a dominant player in city and county circles. At age 17, Herrick was ran

ked first in the Northeast Ohio Tennis Association, 15th in the Western Tennis Association and 109th nationally. She compiled a 52-0 record in four years of playing at Elyria Catholic and went on to play at Austin Peay University. She played professionally in Europe and on the Florida Women’s tour. In 1994, she received the Herb Nold Award for volunteer work in Northeast Ohio. She continues teaching her craft as a certified professional. She was named Elyria Catholic’s Outstanding Female Athlete in 1978. Herrick was inducted into the USPTA Hall of Fame in 2019 and currently she is president of the Board of Directors for the Blessing House.

At 210-pounds, John Husband was right in the middle of one of Elyria High’s greatest ev

– in fact, he was part of two of the greatest teams ever fielded by the Pioneers. It was Husband at fullback for the undefeated teams of 1968 and ’69. The balance Elyria had on offense kept any of the runners from amassing eye-popping numbrs, but Husband ran for 466 yards and scored 34 points as a junior and added 814 yards and 36 points as a senior. He and backfield mates Tony Godbolt and Mac Thomas are all members of the Elyria Sports Hall of Fame. All three were named first team all-Buckeye Conference and Husband was selected to the 2nd team All Ohio by the Associated Press. Elyria was ranked among the best teams in Ohio both years – finishing fourth in the rankings in 1968 and second in 1969. Never was Husband’s presence felt more prominently than the Sandusky game. It was his pounding runs that led Elyria to an 82-yard, game-winning touchdown drive late in the fourth quarter that beat the Blue Streaks in one of the greatest high school games ever played at Ely Stadium. Husband started the drive with a nine-yard game and carried the ball six straight times, one for a 20-yard gain and another of 11 yards that set up the winning TD pass from Brad Barton to Thomas. Husband was awarded the Lorain County Golden Helmet award. He earned a scholarship to Ohio State and not only played in the backfield but on the line of scrimmage as a guard.

For three seasons at Elyria Catholic and his career at Grand Valley State, Guy Schuler was the man with the golden arm. He was the quarterback who pr

ovided his teams with the ability to move the football through the air. For those two schools, nobody did it better. Schuler

set records and standards for winning that few can equal. He became EC’s signal caller the second game of his sophomore season in 1980 after the Panthers had lost their opener. They would not lose another regular season contest over the next three years. The 1980 team won its last nine games, the 1981 team finished 8-0-2 and the ’82 team was 9-0. All three were Erie Coast Champions and later won two regional titles – falling in the state semi-finals to eventual state champion Akron St. Vincent/St. Mary. At 6-foot-2, 188 pounds, Schuler set nearly every EC passing record. He threw for 3,410 yards in his career, completing 58.4 percent of his passes. As a senior, he threw 14 TD passes – completing at least one for a touchdown in all but one of EC’s games. Twice he was first team all-conference and as a senior he was Back of the Year in the county, district and conference – earning All-Ohio first team honors as well. At Grand Valley State, a Division II NCAA school just west of Grand Rapids, he completed 414 of 780 passes worth 5,786 yards – second best all-time in school history at that time. His 2, 331 yards passing in a season was also a record at the time. He also held the mark for pass attempts and total offense in a single game.

In 1969, Little League West’s 11- and 12-year old all-star team set sail on a great adventure that wound up being tied as the 3rd best team 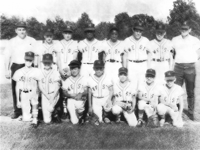 in the world. The West All-Stars won nine games and tied one in 11 starts in tournament competition. In order, West defeated Avon, 6-1, New London, 5-1, and Collinwood, 4-1, to win the District. In the state tournament, West defeated Poland, 6-0, Marion, 1-0 in 12 innings and Wintersville, 4-0, for the championship. At the Central States regional in Ottumwa, Iowa, West beat Chicago Evergreen Park, 5-1, and in the finals, beat Sedalia, Mo., 2-0, to advance to Williamsport. At that time, West was just the third Ohio team to play in the Little League World Series. Elyria opened with a 5-2 win over Mayaguez, Puerto Rico, then faced Taiwan in the semi-finals, losing a hearbreaker, 4-3. In the consolation, Elyria and Tampa were tied 1-1 after nine innings before the game was game was halted due to the championship game scheduled to be on national television. The team was managed by Don Biltz and coached by Ray Esser. Members of the team included Chris Wisneski, Craig Schumacher, Dave Gibbs, Pierce Burt, Glenn Johnson, Steve Eisom, George Biltz, Ken Bellottie, Ric Bellottie, Tom Moyer, Bill Berenzi, Bill Green, Randy Below, and Rob Remick. 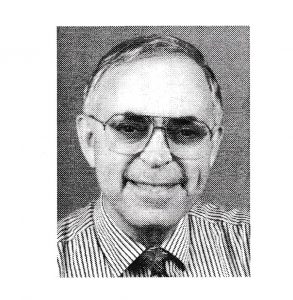 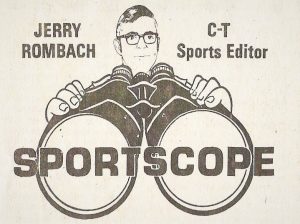 One of the founders of the Elyria Sports Hall of Fame, Jerry Rombach was also the sports editor of the Chronicle-Telegram for many, many years before retiring. Rombach’s column — Sportscope — was a staple of the Chronicle for many, many years. Rombach helped establish the annual banquet as one of the most important events the City of Elyria looked forward to each year. He served as a director for the ESHOF for over 25 years.

As sports editor, Rombach has been inducted into both the county football coaches and basketball coaches Hall of Fame. Twice he served as chairman of the Ohio Prep Sportswriters and has won many writing awards. He passed away in July, 2017.