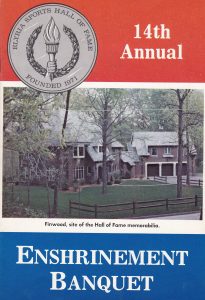 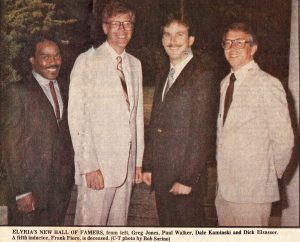 Born to run. Born to coach runners. There have been a lot of high school cross country coaches over the years but no one has enjoyed the success of Dick Elsasser. The Elyria Catholic coach has guided the Panthers to three state championships, three runner-up finishes, and two third place finishes in his career. Cross Country and Elsasser are synonymous at Elyria Catholic. Besides the strong state showings, he’s coached 11 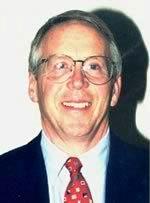 sectional crowns – nine consecutive – five district championships and his teams were perennial conference champions. Elsasser was born in Marion and graduated from Marion Catholic where he was a two-time state champion miler. He went on to be a four-year letterman in track and cross country at Bowling Green. He was also a successful junior varsity basketball coach for the Panthers – winning over 150 games in 16 seasons. His cross country teams won state crowns in 1973, 74 and 78. He had 10 teams place in the top 15 at the state meet over a 12 year period.

The sport of wrestling has been around a long, long time but it was Frank Fiore that brought the sport to the high school level in Lorain County in 1959. Fiore started Elyria High’s wrestling program from scratch and quickly built the Pioneers into a wrestling power. In five years, Elyria was 55-7 in dual meets with five of those losses coming in his initial season. His teams won four Lorain County Invitational Championships, three Buckeye 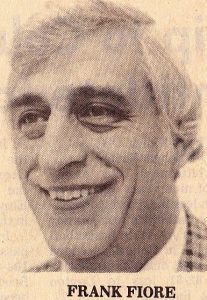 Conference titles, three sectional and two district championships. He had two undefeated dual seasons at Elyria before moving on to Warrensville Heights and Lorain County Community College. While at LCCC, Fiore led the Commodores to an undefeated season in his second year and a sixth place finish in the National Junior College Tournament. The Lorain County Wrestling Coaches Association thought so much of Fiore, it named a scholarship fund in his honor. He helped organize the Lorain County Wrestling Coaches and Officials Association in 1980.  In his only season coaching at Huron, the Tigers won a league championship and his 7-1 mark at Warrensville Heights was the schools best. He qualified two wrestlers for the state meet. A Garfield Heights native, Fiore won a pair of 165-pound state championships before graduating in 1955. At Kent State, he won three Mid-American Conference titles at 175-pounds, five Northeastern Ohio AAU titles and one Interstate Intercollegiate Individual crowns. Upon graduation from Kent State in 1959, Fiore came to Elyria and served one year as cross country coach and was a football assistant for three years. He is also a member of the Ohio Wrestling Hall of Fame (inducted 1982) and the Kent State University Hall of Fame (1980). Fiore died at the young age of 48 but his accomplishments will live forever.

Elyria West High School football came to the forefront when the talents of Greg Jones were unleashed from 1974-76. Jones remains one of the top 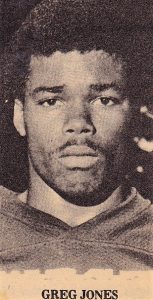 oring leaders in Elyria Football history. He was Lorain County’s Golden Helmet winner in 1976 and went on to a great career at Miami of Ohio. Jones once rushed for a school record 287 yards and ran for 1,412 yards in a single season. He scored 32 points in one game and tallied 96 in a single year. His three-year total of 3,934 yards placed him fourth all-time to the time of his selection to the Elyria Sports Hall of Fame. At Miami, he was a three-year letterwinner in both football and track. At the time of induction, Jones was still ranked second on Miami’s all-time rushing list with 2,842 yards. His 1,134 yards gained in 1981, were fifth best for a single season. Only ten players in Miami’s great football history had topped the 1,000 yard mark in a single season at the time of Jones’ induction. He topped 100 yards in a single game 10 times at Miami and was first team All-Mid American Conference in both 1980 and 1981.

Whenever anyone talks about the all-time greats at Elyria Catholic, you can be sure Dale Kaminski’s name will be brought up. Kaminski w

years of varsity football, he caught 38 passes and rushed 62 times – but he scored 14 touchdowns or once for every seven times he touched the football. As a senior, Kaminski led the Panthers in rushing, scoring, pass receiving, and punting. His 26 receptions set a school record at the time. He was a threat to score from anywhere on the field. Against Parma Byzantine Catholic as a junior, Kaminski ran the ball only four times but gained 200 yards – scoring on runs of 67- , 81- , and 47-yards. On the basketball floor, Kaminski was even better. After an injury-plagued junior year, Kaminski stepped up as a senior to become one of EC’s finest. He led the Panthers in assists, free throw shooting, and was the second leading scorer with a 16.6 average. He capped his career with a 27-point effort in a two-point loss to Admiral King in the sectional finals. EC was 19-2 that year and won the North Central Conference. Kaminski was named the team’s outstanding player. He went on to Louisville University on a football scholarship. He had 14 catches, scored one touchdown and did all the punting for the freshman team in three games. He played for Lee Corso’s varsity, making six catches for 113 yards as a sophomore – scoring twice. He improved to 10 receptions for 133 yards as a junior before being switched to tight end for his senior season. Kaminski didn’t disappoint. He had his best year as a Cardinal with 18 catches for 272 yards to lead the team in receiving yardage.

expected much from a lanky, slender basketball and tennis player from Elyria back in the late 1950s, but Paul Walker proved everyone wrong with his success on both courts. Walker was truly a two-sport star at both Elyria High and Kent State – excelling in both basketball and tennis. He was a second team All-Ohio basketball star his senior year at Elyria and was named Most Valuable Player in the Buckeye Conference. Elyri

a lost only one game during the regular season during Walker’s senior year and the Pioneers won the district championship before losing to eventual state champion East Tech in the regional. On the tennis court, Walker was doubles runnerup at the state tournament in 1958. He was captain of both the basketball and tennis teams. He was awarded the DECCA award as Elyria’s outstanding senior athlete. At Kent, Walker earned three letters in both basketball and tennis. He captained the basketball team in 1962 and was the Flashes number one singles player in tennis for three seasons. In 1962, Walker won the Merle E. Wagoner Award given to the top senior athlete who also displays academic achievements. He earned his bachelor’s degree in 1962 and his masters in 1968. Walker was inducted into the Kent State Hall of Fame in 1984. At one point, Walker was ranked as the number one tennis player in Northeast Ohio. Walker coached both high school basketball and tennis at Kent Roosevelt, compiling a 53-13 record with the basketball team. He later served as Kent State’s tennis coach and assistant basketball coach from 1968-72. Later, Walker was the tennis director at the Cleveland Skating Club in Shaker Heights.