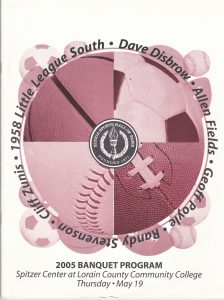 seasons. He did the dirty work on the line of scrimmage and was named to the UPI All-Ohio team his senior year. Disbrow was heavily recruited to continue his football career in college. He was offered scholarships by Indiana, Rutgers, Miami of Ohio, Toledo, Ohio University, Bowling Green, Arizona State, and the University of Tennessee. Dave eventually chose to attend Tennessee but unfortunately a serious knee injury prevented him from a potential NFL career. Today, Disbrow and his family own and operate Midway Oh Boy Restaurant, an Elyria tradition founded by another one-time EHS lineman, Nelson Krugman, in 1953. Disbrow was highly thought of by both head coach Bill Barton and line coach John Sheldon. Disbrow was first team All-Buckeye Conference, on both sides of the ball and was named Elyria High’s outstanding lineman of the year for the Buckeye Conference co-champions.

Al, as he is best known to his close friends, was one of the most durable football players at both Elyria High and Ashland College. Fields graduated from EHS in 1965

and was a key performer on one of the Pioneer’s best teams ever – the 1964 state ranked, Buckeye Conference champions. Fields played both ways – the only player on that team to win All-Conference honors on both sides of the ball. “He was our only 100 percent two-way player and is very deserving (all-Buckeye) because of his tremendous desire,” said Elyria coach Bill Barton shortly after Al’s senior season. He lettered two years with Elyria and the team won 17 of its 20 games. He was an offensive end and defensive safety – catching seven passes in Barton’s run-oriented offense and intercepting four passes on defense. He was honorable mention All-Ohio in an era when only 11 players were named to the first team. He also played basketball and participated in track for the Pioneers. At Ashland he lettered four years and started every game. Ashland was 26-6-4 during his four-year career. He was named to the NAIA All-American team as an offensive lineman his junior year and was enshrined in the Ashland College Hall of Fame in 1983. He is currently the superintendent of the Salisbury Township Schools in Allentown, Pennsylvania. He formerly coached both football and track at Emmaus High School and Paulding High School.

1984 when the Panthers won a county record 26 games in a row. The Panthers were an amazing 43-1 during Geoff’s four years. Geoff was all-Ohio his senior year and second team all-Ohio as a junior. He was the class ‘AA’ Lineman of the year his senior year and the county Lombardi Award winner. Geoff earned a scholarship at Indiana University and played in two bowl games. A knee injury suffered during his junior year at Indiana halted his football career. He was also a good baseball player. Geoff was a member of Little League North’s state champion team in 1982 and Post 12’s District champion team as a 16-year old.

was the first Golden Helmet Award winner in Lorain County for his hard-nosed play at linebacker for the Pioneers. Randy was a three-year starter for Elyria under Bill Barton who called him “the best linebacker for all-around ability and other assets I’ve ever had at Elyri 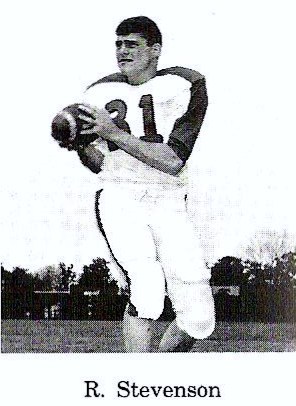 a”. Randy was second team “AA” All-Ohio in an era when there were only 11 players selected to the squad. Randy was selected to the Sunkist All-American team his senior year. He was all-Buckeye conference as well. Randy earned a scholarship to Duke University where he played Monster Back until a series of head injuries shortened his career. Randy was also a valuable member of Dale Reichenbach’s final team at Elyria High that lost in the regional semi-final to Lima Shawnee.

e his mark as a coach at Avon Lake High School where his Shoremen were 227-187 in 18 years. Zunis’ teams won three conference titles, two district championships, and one regional championship. Cliff was Division II coach of the year in 1999 when the Shoremen finished the regular season undefeated and ranked as the number one team in the state. Six of his teams finished ranked in the top ten. At Ashland College, Cliff was a four-year starter at shortstop with a career batting average of .325. He led the team to a second-best all-time college Division II team fielding percentage at .978. He made only one error his senior year.  He led Ashland in hitting two of his four years and ranked fourth in the nation in doubles in 1973. At Elyria High, Zunis was a two-year starter at shortstop and was selected for the All-State team in leading the Pioneers to the regional finals. Elyria won 22 games – a school record at the time and his .483 batting average was also the school standard through 1970. Cliff led the team in doubles, triples, runs batted in and tied for the lead in home runs. He was named to the All-Buckeye Conference first team.

It was a me

morable year for the city of Elyria in 1958. The city celebrated its 125th anniversary during the summer of 1958 with the South Little League capping off the celebration with the city’s first state little league championship. Manager Don Holzhauer and Coach Frank Woods assembled the all-stars from the Majors division at Little League South. At that time, South’s home was known as Troxel Field. It was built behind the Troxel Company. That location now houses a furniture and department store. Members of the team included Tim Orvis. Jim Lepkowski, Greg Young, Frank Finch, Joe Zaleski, Bill Ignatz, Craig Crozier, Houston Young, Ron Zidek, Dave Dicken, Ken Lengel, Denny Kaminski, Rich Pichola, Steve Perkins, Eddie Woods and Dennis Crozier. On July 23rd, South opened its tournament run with a 10-0 shutout of North. Right fielder Zidek clobbered a pair of home runs and knocked in four. Dennis Crozier threw a 5-hit shutout at North with his battery mate and cousin Craig getting three hits and scoring three runs. Lepkowski, the lead-off third baseman, drove in three runs. Lengel followed up Crozier’s shut-out pitching with a four-hit, 8-0, whitewash of Medina. Lengel helped his own cause with two hits and two RBI. Woods had three hits, Young and Zidek two each. Zidek was credited with throwing out two would-be scorers from right field to help preserve the shut-out. South then eliminated West, 8-3, at Lappin Field behind the old General Motors plant. South scored three runs in both the third and fourth innings to open a 7-0 lead. Pichola and Woods each had a pair of hits. Lengel drove in two. South then shut-out Painesville, 11-0, on a two-hitter by Dennis Crozier in what was called a sub-state game at Lappin Field. Lengel was three for four at the plate with Pichola and Dennis Crozier hitting homers. In the next game, Lengel struck out 13 and fired a one-hitter as South defeated Austintown, 6-1, at Campbell, Ohio. Young had three hits, Woods two to pace South’s 11-hit attack. South advanced to the state title game with a 9-5 victory over host Massillon on August 4th. Elyria built an 8-0 lead at one point behind back-to-back home runs by Zidek and Dicken. Zidek had three hits in the game. Young, Lengel, Craig Crozier, and Dicken each had a pair. South then won the city’s first state championship with a 2-0 win over Ashland at Galion in front of an estimated crowd of over 2,500 fans. South scored single runs in the third and fourth innings. Lengel, an 11-year old, struck out seven and walked four in winning his fourth tournament game. He allowed just two hits. Young’s double to right-center scored Pichola with South’s first run. Dicken scored the other run on a after a walk, a wild pitch and a single by Dennis Crozier advanced him to third. He then scored with some alert base running on a ground ball by Lepkowski. South outscored its opposition, 66-9, during its championship run. South lost its bid to advance to the World Series with a heartbreaking 6-5 loss in 12 innings to Birmingham, Michigan in a game that took two days to complete. 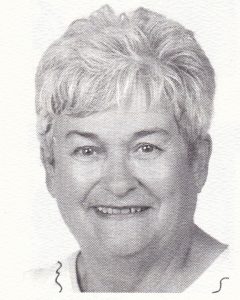 Marcia Hersman served in the background as the Elyria Schools Administrative Assistant to the Athletic Director for nearly 20 years. She began her career with the schools as a clerk-typist at Eastern Heights Junior High in 1978. In May of 1980, she took her first position in the Athletic Department as the accounting clerk and worked in multiple capacities until she retired in March, 1999. During her 20 year career in the Athletic Department, she worked for five different ADs: Jim Schrock, Marty Hoover, Jim Reitenbach, Margaret Wear and Mark McGuire. If you wanted an answer to a question regarding Elyria Athletics, she was the person to ask. If you needed information on a particular athletic event, she was in the know. Marcia Hersman defines Distinguished Service. Her husband Bob was a long-time fixture in coaching at Elyria High and is also a Hall of Famer. For many years, Mrs. Hersman was a member of the ESHOF board.