The city of Elyria was well represented at the 1992 state baseball tournament. Both Elyria West and Elyria High won regional championships in Division II and Division I respectively but it was the Wolverines that brought home the title from Thurman Munson Stadium in Canton behind the outstanding pitching of senior right-hander Damon Mathis (5-0) and junior lefthander Tarrance Staton (4-2) (see inset).

It was the first state baseball championship for a Lorain County school. Coached by Tom Kubuski and assisted by Jim Slaughenhaupt, West (21-4) finished the year with an eight game winning streak culminated with an 11-inning 2-1 victory over Steubenville in the semi-final and a 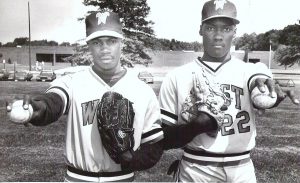