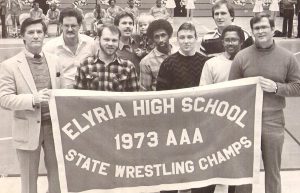 On March 10, 1973, Elyria High wrestling coach Bill Pierson boldly led his four-man team into St. Johns Arena in Columbus. At stake was the state championship, a prize no other Elyria team in any sport had captured to that time. Pierson was confident. He had watched Ricky Lewis, Kenny Redd, Larry Beal and Mike Sittinger mature under his tutelage and he knew his own version of the “Big Red Machine” was capable of greatness. The championship came down to Elyria, Akron Garfield and Mentor and the lead changed hands three times on that March night but Lewis put away his opponent, the muscular John Steele of Oak Hills, in a convincing 3-1 win to grab first place in the 126-pound class to put the state crown within reach. In the end, Elyria edged Garfield by two points, 36-34. Beal finished third in the 155-pound class, Redd fourth at 98 pounds, and Sittinger sixth at 145 pounds.