Bob Guinta really didn’t enjoy the box of popcorn he ate the night Elyria Catholic played North Ridgeville in one of the most bizarre boys tournament basketball games ever played in Lorain County.
“I ate the whole box,” said the then Panthers coach, recalling that someone handed him the popcorn just prior to the second half. “I didn’t even bother watching the game. They just stood out there and dribbled it.”

The year was 1973, the opponent was North Ridgeville and the setting was the Class AA sectional final.

The Panthers survived an all-out stall by North Ridgeville, 10-8. They never trailed though — choosing to stay back in their 1-3-1 zone. When Al Noll scored with 2:26 left to put EC up 10-6 it appeared the win was secure.

But the Rangers’ Ken Nelson scored with seven seconds left and North Ridgeville got the ball back off two missed free throws with three seconds to play. EC prevailed when Ken Bachna’s final shot … which he might not have even got off in time … missed. 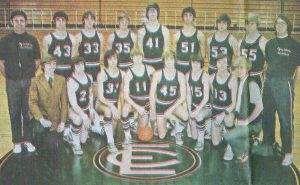 The Panthers breathed a collective sigh of relief. They made it to the district in Berea and eventually qualified to their first and only trip to the Final Four in Columbus.

Elyria Catholic’s 1972-73 basketball team, along with Elyria High’s team from the same year, Brooke Bader, Ken Fenik, Adam Larrick, Briant McLaughlin and Jan Sito, will be inducted into the Elyria Sports Hall of Fame at Lorain County Community College’s Spitzer Center on Saturday. The late Cooper Hudnutt will also be honored with the Distinguished Service Award.

Veteran North Ridgeville coach Dave Dudik didn’t figure his Rangers had much of a chance against the once-beaten Panthers. After all, EC thumped the Rangers 54-34 during the regular season. Dudik felt the only chance his team had was to limit the possessions and frustrate Elyria Catholic. 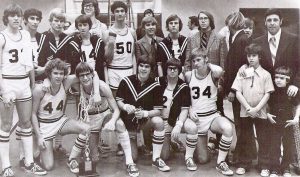 “Everybody wants to talk about that game,” Guinta said. “It was scary. You shouldn’t lose to a team you beat by 20 earlier. (Dudik) had a plan. They were smaller and quicker than we were. I was helpless. He told me later he shouldn’t have stalled, but it was a good idea. I didn’t know what to do but we had the lead. I think it was 8-4 for the longest time.”

“It was an absolutely brilliant game plan on their part,” said the lone junior starter, Rick Schneider, who still lives in the Cleveland area and is employed by Ford Motor.

“They just stalled,” said Russ Sherman, a senior. “We just sat back.”

“Unfortunately, that’s all they could do,” said Paul Zemanek, another senior. “We really didn’t like it. I know the fans didn’t.”

“I didn’t get to play much in that game,” said sixth man Mike Rushinsky, another senior. “They just held the ball. It was pretty brutal. I know it wasn’t fun to watch. We were still pretty confident we’d win. We felt bad for the people who paid their way in. We had strong crowds wherever we played.”

Guinta would be the first to admit it takes a certain amount of luck to make it to state. He had been there before with Celina in 1964 — ironically the same season Elyria High knocked off unbeaten and heavily favored Cleveland Rhodes on its way to a Cinderella appearance in Columbus.

The 1973 team may not have been the most talented Guinta had in his 22 years at EC — and he had lots of talent on the way to 329 wins — but it just may have been the best “team.”
“They knew their roles,” Guinta said. “Don’t ask me to compare but it was a well-rounded team. They knew what they had to do. They played defense very well.”

The only loss going into the tournament was to Clearview early in the season. No shame there since the Clippers advanced to the regional final in 1973 and went on to win the state title a year later.

Guinta pretty much relied on six players all year and five of them were seniors.
Sherman, at 6-foot-7, was the leading scorer (17.5 points per game) and rebounder (10.1). He had a deadly hook shot and was the first EC basketball player to make All-Ohio.

“It was just something I worked on,” Sherman said of his hook shot. “I shot a lot in the driveway growing up. I really haven’t thought about it to be honest.”

The team averaged nearly 63 points a game and gave up fewer than 50.

“We didn’t worry about who got the points, who got the rebounds,” Zemanek said. “Our goal was to keep the opponent under 50 points. We were always switching defenses. We’d press, we’d play zone. Sometimes we’d play man. That had to confuse our opponents.”

Just the same, it was a hair-raising tournament trail after an easy 79-44 opening romp over Avon. EC then nipped defending district champ Independence 56-55 before Ridgeville’s memorable stall.

Against Independence, Sherman scored 24 points — 18 in the first half — despite suffering a rib injury in the Avon game. EC shot only 34 percent and had to come from 11 points down. Noll came up with a big steal and basket and Zemanek poured in seven big free throws.
The Panthers nipped Olmsted Falls 54-53 and beat Twinsburg 57-45 to win the district title at Baldwin Wallace.

Against Falls, the Bulldogs’ final field-goal attempt from Jeff Miles was ruled too late and the Panthers survived again.

“I can still see Lou Rotunda (EC’s scorekeeper at the time) waving his arms to indicate it shouldn’t count,” Rushinsky said. “That was a close call.”

EC shot 59 percent against Twinsburg for its easiest win since the opening round.

At the regional in Copley, the Panthers posted a 68-63 win over Leavittsburg LaBrae, which had four starters back from a team that made regionals the year before and was thinking about making state before the Panthers derailed the plan.

With EC leading 60-57, LaBrae was off and running for a fast-break layup when Schneider stole the ball and fired it to Sherman for an easy basket and a five-point cushion to pretty much put the game on ice.

To reach the state tournament, EC managed to make it through a blizzard and beat Youngstown North 59-45. The game was scheduled to start at 8 p.m. but didn’t tip off until 10.

“I just remember it took us about five hours to get to Copley,” said Sherman, now a safety director for a construction company in Cuyahoga Falls.

Mike Cobb, who was 6-6 and later played football for Michigan State and the Cincinnati Bengals, was North’s star.

“We ran a stack offense,” Guinta said. “Cobb blocked a bunch of Sherman’s shots early on so we moved the stack to the other side. It worked.”

“It was quite a regional,” Schneider said. “Those two teams (LaBrae and North) were as good as any of the teams that were down to Columbus.”

In the state semifinals, the Panthers faced Delphos St. John, coached by an old rival of Guinta’s from his days at Celina — Bob Arnzen.

“I thought we were the only team down there (Columbus) with a chance to beat (Columbus) Ready,” Guinta said.

With good reason. The Panthers were ranked 10th in the state and riding an 18-game winning streak. They were also favored in a statewide media poll against a team with seven regular-season losses.

“We were up by 13 at one time,” Guinta said. “Sherman was scoring with ease. We had the thing in control.”

But EC, which led 29-20 at halftime, soon found itself in serious foul trouble. Delphos went to the line 30 times in the second half as Sherman, Schneider and Talarek all fouled out and Zemanek had four personals. Delphos won 72-61, but lost to Ready the following night.
“We had a significant lead,” Rushinsky said. “(Then) our whole world turned upside down.”
“We set a record for fouls in the state tournament,” Guinta said. “I don’t think it was broken until a few years ago.”

“It was kind of weird,” Schneider said. “It was a shame it turned out the way it did.”
Still, it was an incredible rseason. EC’s 24-2 record remains the best in school history.
“This is a great tribute to Coach Guinta,” Zemanek said. “Unfortunately, Lou Rotunda won’t be around to see it.”