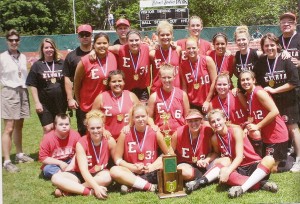 Midway through the spring of 2002, not many, including coach Ken Fenik, gave Elyria High’s softball team much of a chance of going very far in the annual state tournament let alone winning the whole thing. A disappointing 8-0 loss to North Olmsted at its own Pioneer Invitational turned out to be the turning point for the Pioneers and their dominate right-handed All-Ohio pitcher 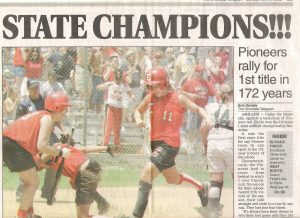 Aubrey Oliver. However, Elyria started winning from that point of the season — winning 16 of its next 17 games including six straight to close the seaosn. The Pioneers marched through the tournament including a 1-0 win over the very same North Olmsted team that it lost to earlier. The Pioneers wound up 27-4 and clinched the state title with a pair of come-from-behind wins at the Ashland finals — beating both Cincinnati Sycamore and Hamilton by identical 2-1 scores to bring home Elyria High’s first team state title in its history. The tournament run included seven one-run victories including as 5-4 win over Midview where the Pioneers scored three runs in the seventh inning to win. Oliver logged 163 innings, striking out 218 hitters in winning 23 games and losing only twice. Batters hit just .191 against her and her ERA was a sparkling 0.69. Elyria’s hitting 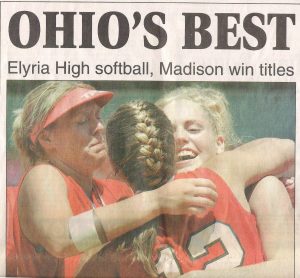