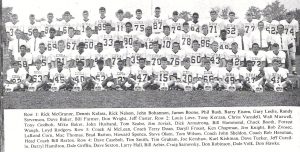 Joining its predecessors from the year before, Elyria turned in another undefeated season and wound up ranked as the second best team in the state. The state playoffs had not started until the 1972 season.

They join the 1947 and 1968 EHS football teams in the Elyria Sports Hall of Fame. The Pioneers rolled through their first six games with no problem but then found themselves trailing Sandusky, 12-7, and 82 yards away from the end zone with just 4:47 left to play.
In front of an estimated 9,000 fans at venerable Ely Stadium, Elyria marched the distance behind its Golden Helmet winning fullback John Husband. Husband carried six straight times to give Elyria a first down at the S-26. On a fourth down play at the S-17, Elyria drew the Blue Streaks off-side to keep the drive alive and then surprised Sandusky with a Brad Barton to Mac Thomas pass for the winning score with just 52 seconds left. The Pioneers defeated a fired up Marion Harding team a week later, 24-19, at Marion and finished up with big wins over Fremont Ross and Lorain. Elyria was ranked 2nd in the Associated Press poll and 3rd in the UPI.

There were no play-offs in football at that time. Husband, Thomas, Tony Godbolt, Tom Szabo, Dick Armstrong and LaRond Corn were named first team All-Buckeye Conference. Godbolt rushed for 1144 yards, Husband right behind at 814. Elyria outscored its opponents 297-53 for the year. 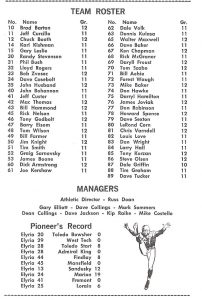 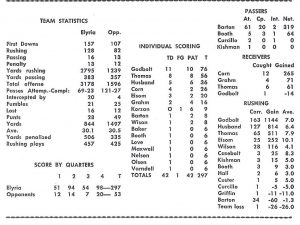