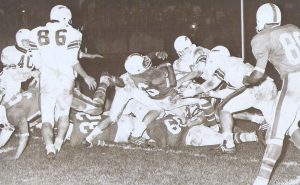 It’s been over 40 years since Elyria High began a remarkable five year run when it won 46 of 50 football games under the direction of Elyria Sports Hall of Fame coach Bill Barton.
Defense earned the 1968 Elyria High Football team its rightful place in the ESHOF but the offense wasn’t too shabby either. Led by a great quarterback (Al VanValkenburg), a solid back-up signal caller (Brad Barton) and a backfield loaded with talented runners deep enough to field two teams, Elyria rolled to its second undefeated team in school history and a fourth place finish in the state polls – the only measuring stick for state champions at the time.

The offense sputtered early in the year and adversity molded this unit into Hall of Fame greatness. Five defensive stands within the Red Zone – four within the 10-yard line – enabled the Pioneers to survive a potential early ambush by Admiral King. Then, in the next game against Findlay, Elyria’s defense had four more defensive stands in a 13-2 victory. From there, the offense found its gear and the Pioneers rolled to their first undefeated season in 21 years and set the tone for an amazing five year run under Barton in which Elyria was undefeated three times and lost only four games in winning four Buckeye Conference titles.
Defensively, the Pioneers’ first string allowed only one team to score a touchdown and no team sustained a scoring drive of more than 33 yards. Opponents scored only 24 points all year – the lowest total allowed by EHS until the undefeated 1979 team (15 points) and it did not allow a single point after Sandusky scored in the first quarter of the seventh game of the year.

Elyria opened with a 20-8 victory over Toledo Bowsher, snapping an opening night losing streak that began in 1963. Elyria rolled up 318 yards offensively led by Tony Godbolt’s 111 yards on 23 carries. Defensively, the Pioneers held Bowsher to just 127 yards total. Fumbles and penalties prevented Elyria from scoring until the third quarter and Toledo didn’t score until the final play of the game.

West Tech provided the opposition for the second week and Elyria continued its mastery of the Warriors with a 30-0 victory – its sixth straight shut-out of West Tech. Again the Pioneers had over 300 yards of offense (336) while holding Tech to just 89 total yards. Godbolt led the rushing with 106 yards. Brad Barton completed both his passes for touchdowns.
After getting off to slow starts in its first two games, Elyria was determined to get off to a better footing in closing out the non-conference portion of the schedule with its third home game against Toledo Start. The Pioneers scored 20 points in the first quarter, added 14 more in the second and turned things over to the second and third string in the second half in blasting Start, 57-0. It was Elyria’s highest scoring output since 1925. Nine different backs contributed to Elyria’s 329 yard rushing total while VanValkenburg threw for 105 of the Pioneer passing total of 150. Start was held to just 45 yards total.

In the Buckeye Conference opener, Admiral King gave Elyria its sternest test of the year at George Daniel Field. King’s defense kept the Pioneers in poor field position most of the night and forced four fumbles but Elyria’s defense was up to the challenge and kept the Admirals out of the end zone. VanValkenburg’s 50-yard gain during the Pioneers’ first possession of the second half led to the lone score of the night—a 66-yard drive in seven plays. Elyria managed to outgain the Admirals, 193-186 on the night.

At Findlay, for the first time all year, Elyria found itself behind when Bill Couch fumbled a snap on a punt attempt to give the Trojans a safety early in the second quarter. However, the Pioneer defense set up the first score on a Jim Orwig interception. VanValkenburg then threw to LaRond Corn for 33 yards and finished the drive with a 5 yard completion to Couch for the score giving Elyria’s punter a chance to make up for his earlier miscue. Once again, Elyria’s offensive margin was a slight one, 170-165 overall. VanValkenburg’s four of six passing for 83 yards was certainly a key.

Returning home to Ely Stadium the following week, Elyria’s balanced running attack was too much for Mansfield as the Pioneers won, 26-8. Mac Thomas set up Elyria’s first score with a 36 yard punt return, capped by John Husband’s 3-yard plunge. VanValkenburg ran for the two-point conversion. The Pioneers increased the lead to 14-0 at halftime and pushed the margin to 20-0 when Ed Green blocked a punt and Colin Messaros recovered in the end zone for a touchdown. Mansfield returned an interception 83 yards and added the two-point conversion to close the margin to 20-8 but the Pioneers answered with a 90 yard, six play drive to seal the game.

By then, Elyria was ranked as the fourth best team in the state but the Pioneers long-time nemesis Sandusky was next on the schedule and surprised Elyria’s defense with a first-quarter score in front of an estimated 7,000 fans at Strobel Field in Sandusky. Neil Mitchell recovered a Blue Streak fumbled punt at the 9-yard line to set up John Husband’s short TD run three plays later. John Korzan’s point-after gave Elyria a 7-6 halftime lead. Both defensive units were outstanding. Elyria was held to just 34 yards and one first down in the first half. Sandusky netted just 30. Neither team scored in the third quarter but Elyria blew the game open in the fourth, marching 80 yards in 12 plays capped by Tony Godbolt’s 3-yard run followed by a pair of Mac Thomas touchdowns — a 67-yard punt return and 21-yard pass reception. Elyria’s defense held the Streaks to just 52 yards on the ground and 65 yards total. The Pioneers wound up with 168 on the ground and 55 more through the air.

The following Friday, Marion Harding made the long trek to Elyria boasting a huge offensive line averaging close to 225 pounds from tackle to tackle but the Presidents could muster only one first down and just 35 yards of offense in the first half in falling behind 24-0. It didn’t get much better in the second half as Marion finished with a grand total of 86 yards and four first downs in losing, 37-0. Meanwhile, Elyria’s quarterbacks completed 11 of 16 passes for 129 yards in the air and 10 different ball carriers combined for 205 yards on the ground.
At Fremont the following week, Elyria rolled up 553 yards of offense, held Fremont to 131 and crushed the Little Giants, 72-0. Eleven runners, two quarterbacks and six different receivers all contributed offensively. Elyria’s offensive starters are pictured below.

Elyria’s vaunted defense recovered four Fremont fumbles. The Pioneers’ biggest rival – Lorain – was all that stood in the way of an undefeated season. The Steelmen entered the season finale at 7-1-1, the lone blemishes a 14-6 season-opening loss to Cuyahoga Falls and a 14-14 tie against cross-city Admiral King but the Pioneer defense (below) proved once again to be the difference. Elyria held the Steelmen to just 86 yards on the ground and 189 total yards. In front of an estimated 9,000 fans crammed into Ely Stadium, Mac Thomas scored what would prove to be the only points Elyria would need in the second quarter. Al VanValkenburg ran the option play to perfection, pitching at the last possible second to Thomas for the touchdown. It capped a 54-yard drive. Elyria added icing to the cake by marching the second half kick 65 yards in eight

plays to score with 8:32 left in the third quarter. It was all Elyria’s defense would need. Elyria wound up rated as the fourth best team in Ohio. Only Upper Arlington, Mentor, Canton McKinley were ranked higher and because there was no play-offs in those days, the Pioneers had to settle for fourth place.
On the All-Buckeye Conference team, Elyria landed three players on each side of the ball. Seniors Bill Couch, Al VanValkenburg and Cliff Simonson were named to the offensive team while seniors Wayne Clemmons, Chris Zaffer and Gary Beury were named to the defensive team. Seniors Ed Green, Tim Walsh, Colin Messaros were all selected to the second team.